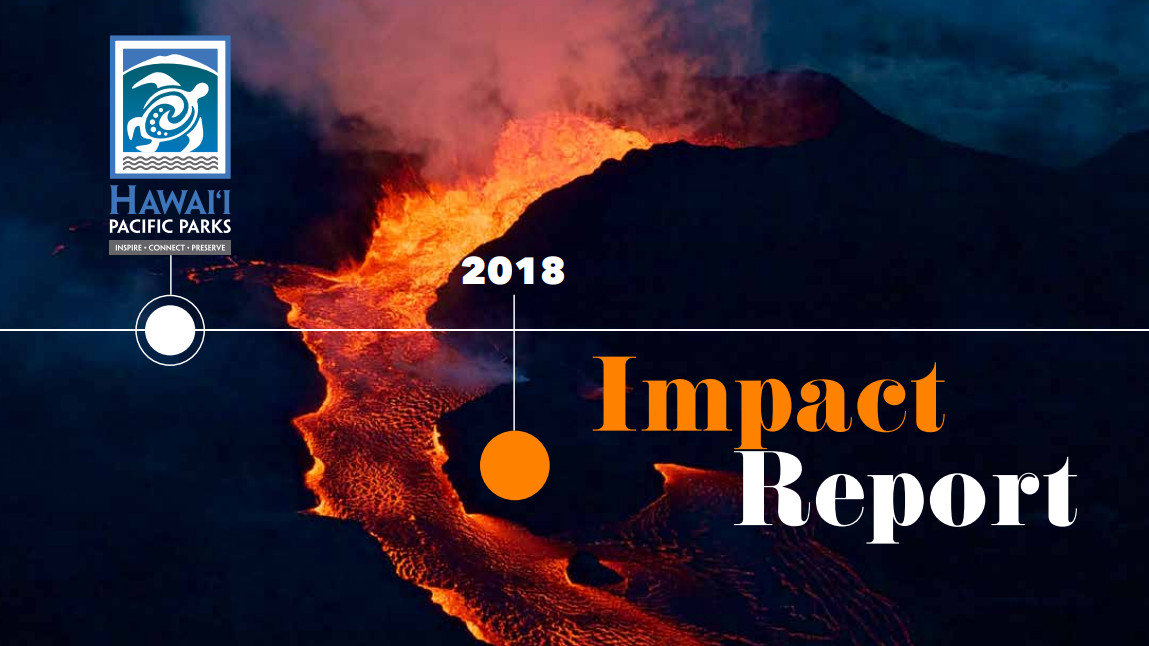 HAWAIʻI ISLAND - The nonprofit association looks back on a year that "truly fits the definition of hulihia: overturning and change," the organization says, using an impressive visual presentation. 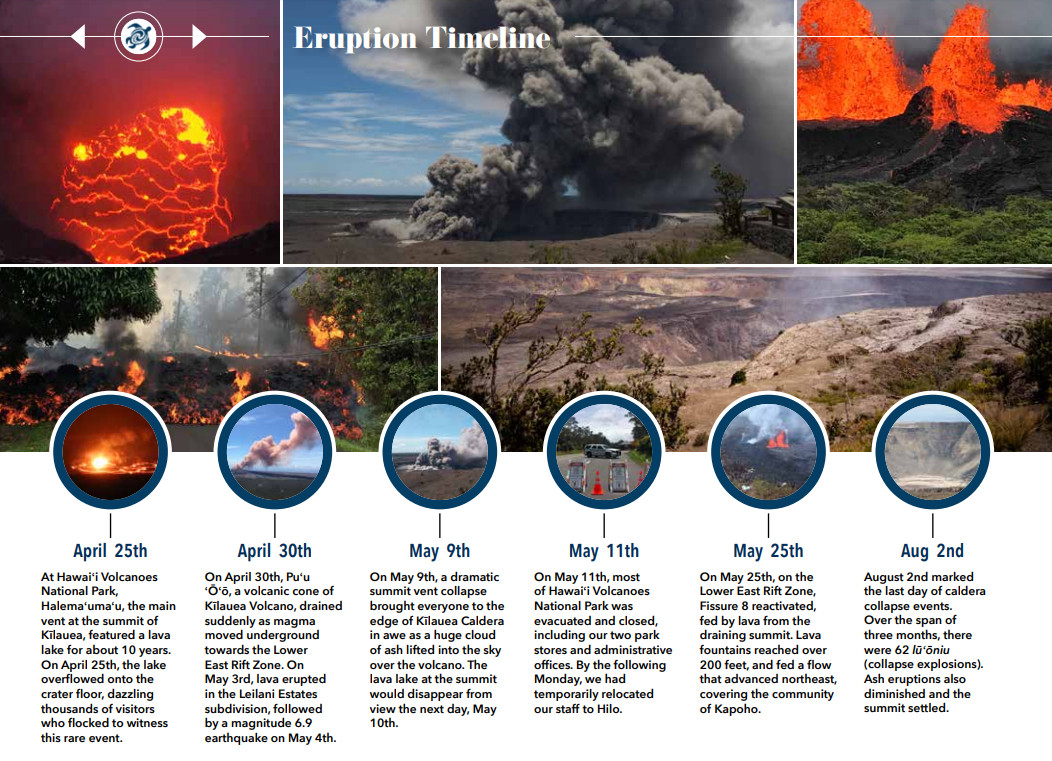 (BIVN) – A new version of a report has been released that details the efforts of the nonprofit Hawaiʻi Pacific Parks Association, working in partnership with the National Park Service in Hawaiʻi and American Samoa, over the tumultuous year of 2018.

But the report also provides a glimpse into the “hulihia (overturning, change) wrought to the lands of Kīlauea” during the past year, HPPA says.

“These pages tell the story of how we managed during a hurried park evacuation, the onslaught of daily earthquakes, a truly remarkable eruption of lava, and the ‘new normal’ of our operations in support of national parks once Hawaiʻi Volcanoes reopened in late September of 2018,” wrote Judy Edwards, the Communications Specialist for the Hawaiʻi Pacific Parks Association, in the Monday media release.

The report begins with an insightful letter from the HPPA board chair, Rosemary Stancampiano, and Executive Director Margot Griffith. It reads, in part:

From October, 2017, to April, 2018, we were setting a pace for yet another “best year ever” for sales in the parks we serve. Visitors flocked to the viewing platform at Jaggar Museum in Hawai‘i Volcanoes National Park to enjoy the awe-inspiring sight of the active lava lake in the Summit Overlook Vent, which had overtopped its rim and flowed onto the floor of Halema‘uma‘u in April.

Then came the series of volcanological events that began on April 30th: the draining of the lava lake in Pu‘u ‘Ō‘ō on Kīlauea’s Middle East Rift Zone; the onset of the eruption in the Lower East Rift Zone on May 3; the 6.9 earthquake on May 4; and the draining of the lava lake in Halema‘uma‘u. In anticipation of elevated activity at the summit, most of the park was closed for an indeterminate amount of time beginning on May 11, which meant the loss of our two largest HPPA sales outlets. In the days and weeks that followed, Halema‘ma‘u and the surrounding caldera floor subsided dramatically, accompanied by collapse explosions registering as 5+ magnitude earthquakes, thousands of smaller magnitude felt earthquakes, and 60,000 quakes overall.

In midst of this unsettling and hectic time, our absolutely remarkable staff stepped up to move us into and keep us functioning in temporary off-site office, sales, and storage spaces; ventured in to Jaggar Museum to affect the rescue of our inventory and equipment; sorted out real estate, insurance, and other matters; and adapted to new sales environments outside the park in Hilo, all while continuing to deliver service with aloha, and remaining positive.

We are grateful to our park partners and vendors for their patience and support during this time. Superintendents and staff moved quickly to approve sale of Hawaiʻi Volcanoes-specific merchandise at our other parks.

A period of calm on Kīlauea began in early August–lava stopped erupting in lower Puna, and summit subsidence and earthquakes ceased. The park was able to reopen on September 22nd. We have been able to operate our park store at Kīlauea Visitor Center, and visitors are returning to the park and its “new normal.” More areas are opening all the time, but the park will have tremendous needs in the near future, as the results of assessments of roads, trails and infrastructure become clear.

This time has not been easy for our board, staff or our park partners. We have had to employ a considerable amount of belt-tightening to our overhead budget, with impacts to staff, and continuing to provide aid to parks funding to our partners has also been challenging. We continued to fund key park programs such as West Hawai‘i park cultural festivals, and fulfilled our commitment of $40,000 in support of endangered species protection at Hawai‘i Volcanoes National Park.

The profound changes wrought to Kīlauea overall, the landscape of the park, and to the operation of the park and HPPA, will echo for years to come. The community as a whole has been heavily impacted and disrupted. Businesses in neighboring Volcano and other communities have experienced significant losses. The Lower East Rift Zone lava flows caused tremendous destruction and dislocation, and there are ongoing needs for food, shelter, and other essentials in the Puna district.

Adversity has provided opportunity and inspired our creativity. It is unlikely that we will make up the revenue gap from the loss of Jaggar Museum for the foreseeable future, with no comparable in-park facility on the horizon. We are optimistic that we will be able to enhance our current activities, or find new ways to garner support of our mission, serving our park partners.

The report also explains that the income from Jaggar Museum and Kīlauea Visitor Center stores represents ~60% of HPPA’s annual sales, “so the closure, loss of revenue, and uncertainty associated with the possible duration of the volcanic activity presented unprecedented challenges,” the report stated. “We immediately went to work, regrouping in Hilo, 30 miles away, to continue seamless operations on behalf of our six park partners, and to plan.”

That regrouping including securing space at the Mokupāpapa Discovery Center and at Prince Kuhio Plaza. Since that time, HPPA has returned to the Kīlauea Vistior Center, though Jaggar Museum remains closed indefinitely.

“Over the last several months, we have strengthened existing relationships and forged new ones,” concluded HPPA Executive Director Margot Griffith. “Adversity has provided opportunity and inspired creativity. It is unlikely that we will make up the revenue gap from the loss of Jaggar Museum for the foreseeable future but we are optimistic that we will find new ways to garner support for our partners.”