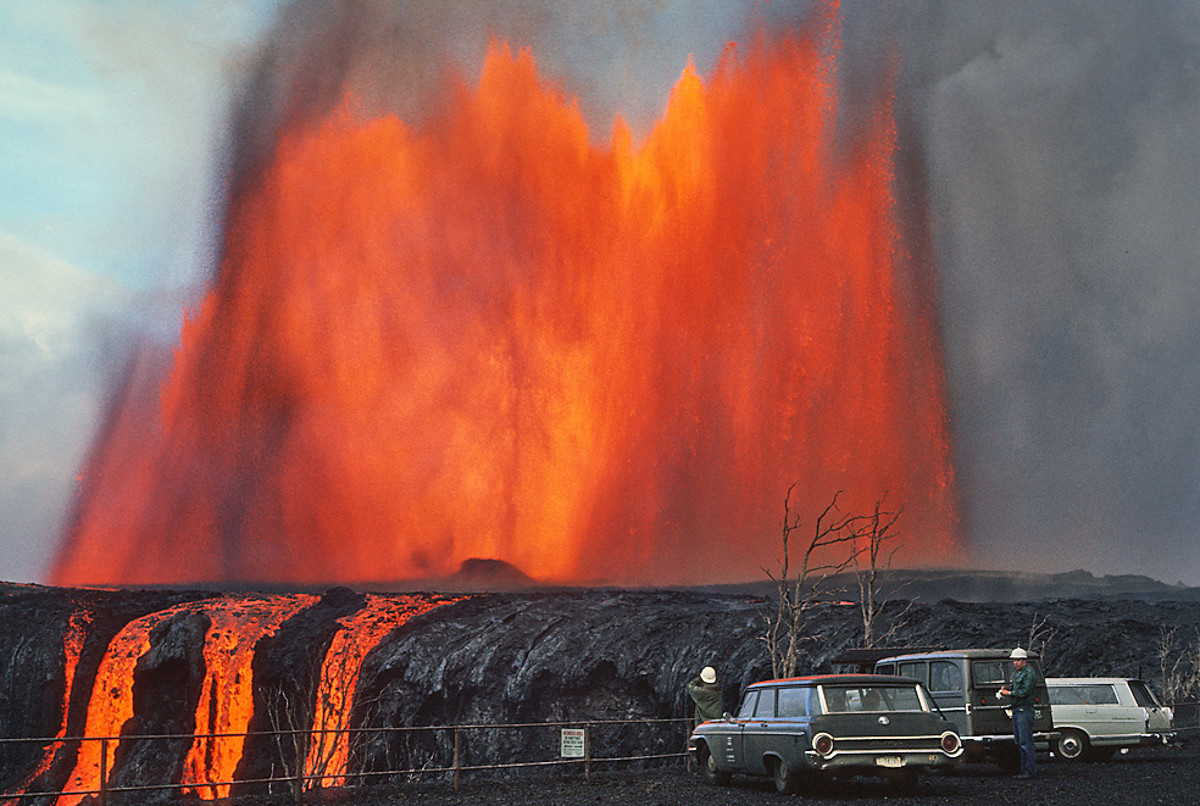 USGS: Lava fountain 300 m (1,000 ft) high plays from Mauna Ulu vent area, 1510 December 30, 1969. Lava flows fed by the fountain cascade into ‘Ālo‘i Crater, 600 m (2,000 ft) from the vent. The flow into ‘Ālo‘i was more vigorous before a dam near the vent diverted most of the lava southward (toward right). The fountain was the widest of the eruption and, as the color pattern shows, appears to fan outward from the vent. This was the last major fountain during the eruption. A couple of hours after the photo was taken, the wind shifted, and the black Ford station wagon, still parked in the same place, was pelted with falling pumice and needed, though never received, a new paint job.

HAWAIʻI VOLCANOES NATIONAL PARK - On May 24, 1969, the first fissure of the Mauna Ulu eruption emerged on Kīlauea Volcano. This week's Volcano Watch article takes a look back. 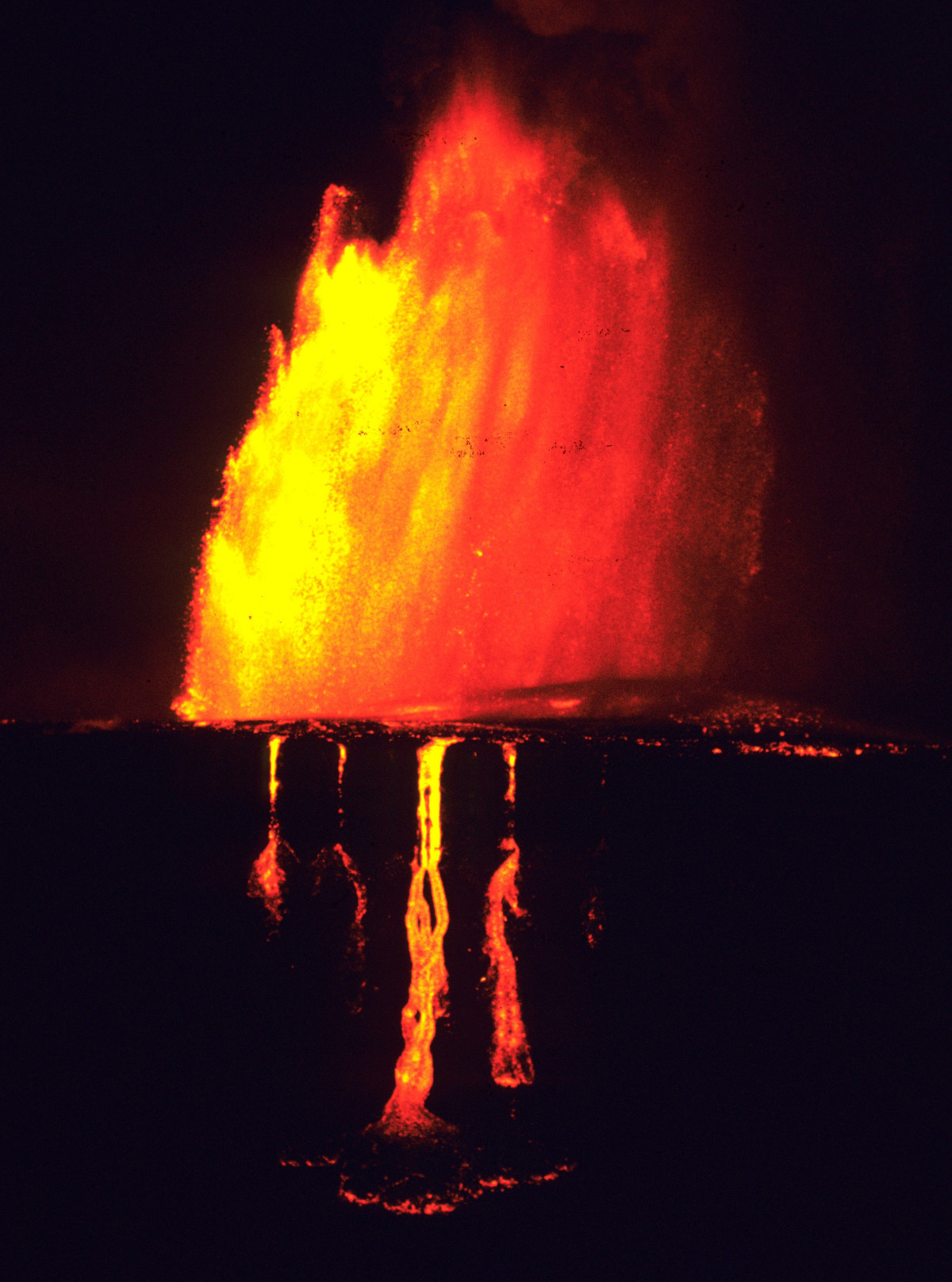 This lava fountain, which erupted on September 6, 1969, during the Mauna Ulu eruption, was about 540 m (1770 ft) tall. The tephra cone, eventually named Mauna Ulu, can be seen in the fallout area (right of the fountains. in middle of image). It is now a 121 m (397 ft) tall lava shield in Hawaiʻi Volcanoes National Park. In the foreground, lava cascades into ‘Ālo‘i crater, where it began to spread across the crater floor (bottom of image). USGS photo by D. Swanson.

(BIVN) – May 24 is a noteworthy day in the geological history of Kīlauea Volcano.

In this week’s Volcano Watch article written by U.S. Geological Survey Hawaiian Volcano Observatory scientists and affiliates, the significance of the date is explained. This week’s article is by HVO geologist Carolyn Parcheta.

May 24, 2019, is a notable date in Kīlauea Volcano’s history. It is the one-year anniversary of several key events in the 2018 Kīlauea eruption, most notably, the reactivation of fissure 8 with intermittent spattering while fissures 7 and 21 were producing two ‘a‘ā flows. It is also the 50th anniversary of another important event on Kīlauea’s East Rift Zone: the start of the 1969‒1974 Mauna Ulu eruption.

Fifty years ago, on May 24, 1969, the opening fissure of the Mauna Ulu eruption broke ground where Kīlauea’s east rift and the Koa‘e fault zone intersect. This fissure behaved similarly to fissures 17, 20, and 22 of the 2018 eruption with 30-m- (100-ft-) tall lava fountains emerging from a linear crack. This style of eruption is classic to Hawaii and is thus called “hawaiian fountaining” in volcanology textbooks around the world.

At Mauna Ulu, the fissure system stretched 4.5 km (3 mi) from east to west and cut straight through ‘Ālo‘i and Ala‘e pit craters within Hawaiʻi Volcanoes National Park. The fountains were confined to two main areas: one between the two pit craters and the other west of ‘Ālo‘i crater. ‘Ālo‘i crater filled with 25 m (82 ft) of lava, which then drained back into a drowned fissure vent on the crater floor, even though lava was coming out of the ground on either side of the pit crater!

The episode 1 fissure produced spatter in linear ramparts several meters (yards) high on the north (upslope) side of the fissures. Ramparts did not generally form on the south side of the fissures because the spatter was rafted away on lava as it flowed downslope.

Ultimately, this brief fissure was the first of 12 lava fountaining episodes during the early Mauna Ulu eruption that continued through December 31, 1969. Beginning with episode 2, activity was localized to only the eastern fountaining zone. The vent would often have dual fountains, which erupted side-by-side, occasionally with both the same height, ranging from several tens to several hundred meters (yards) high.
The lava fountains eventually built a tephra cone 50 m (150 ft) tall. This cone, made of scoria, pumice, and yellow-gold reticulite was named Mauna Ulu (growing mountain). It was later covered in 70 m (230 ft) of lava and is a prominent landmark still visible from the Chain of Craters Road in Hawaiʻi Volcanoes National Park.

After a 3.5 month pause (October 1971 to February 1972), eruptive activity resumed for two more years, until July 1974, when the eruption finally ended.

This eruption produced invaluable scientific advancements in volcano science, including an improved scientific understanding of how pāhoehoe and ‘a‘ā form. Mauna ulu provided the first detailed observations of pillow lava forming underwater—filmed by brave divers! The development of large lava flow fields, the formation of lava tubes, and the origin of tree molds were also documented.
Indeed, May 24 marks an important anniversary: The Mauna Ulu eruption was the largest, most voluminous, and best documented eruption recorded at Kīlauea in the 20th century, until 1983 when the next long-lived eruption began. 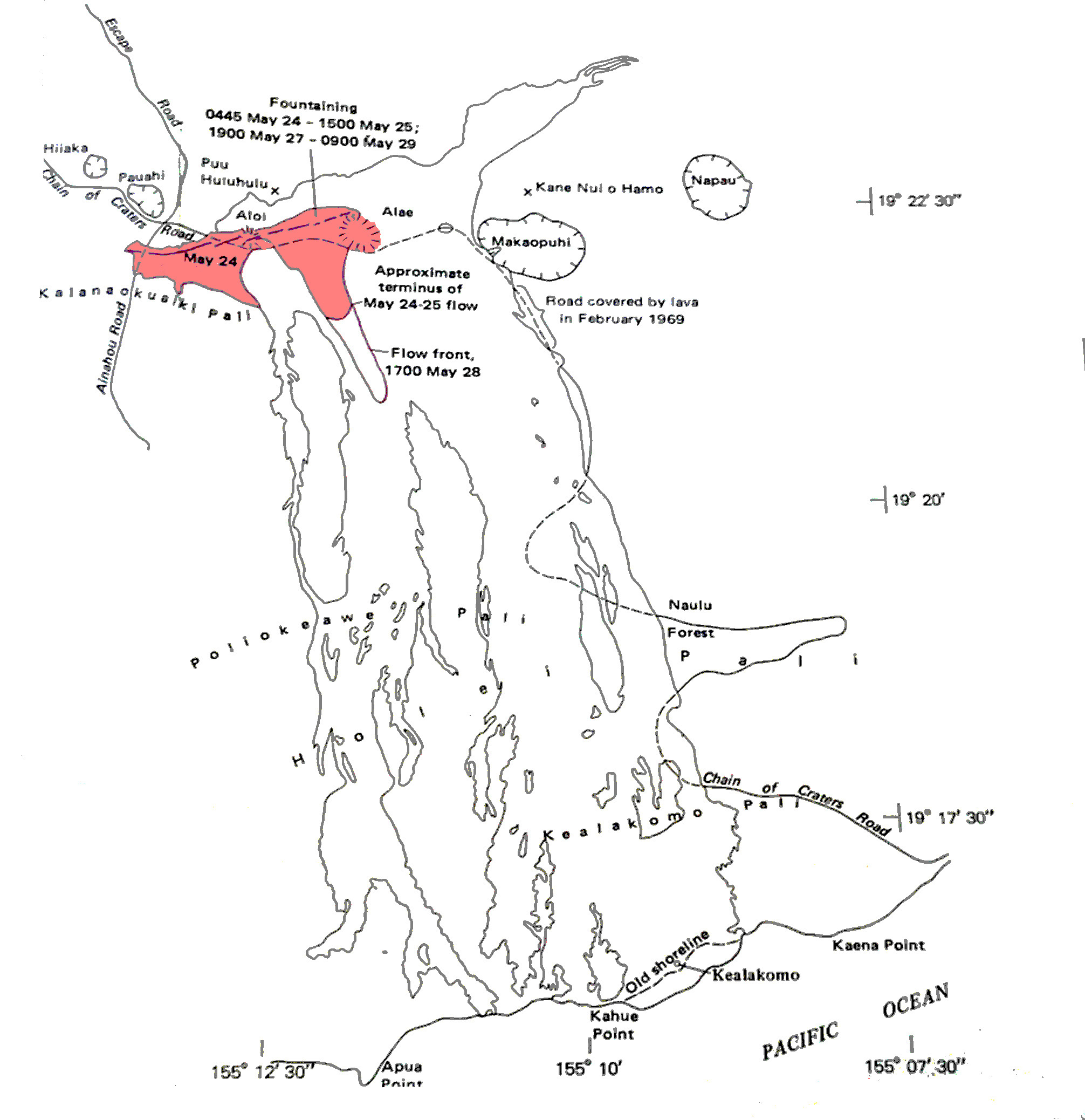 Red dashed line delineates the May 24-25, 1969, fissure of the Mauna Ulu eruption. Pink denotes the lava flow field produced by this episode 1 activity. Black lines show the extent of the flow field at the end of the Mauna Ulu eruption in July 1974. A dashed black line indicates sections of the original Hawaiʻi Volcanoes National Park Chain of Craters Road that were covered by Mauna Ulu lava. Map source: USGS Professional Paper 1056.