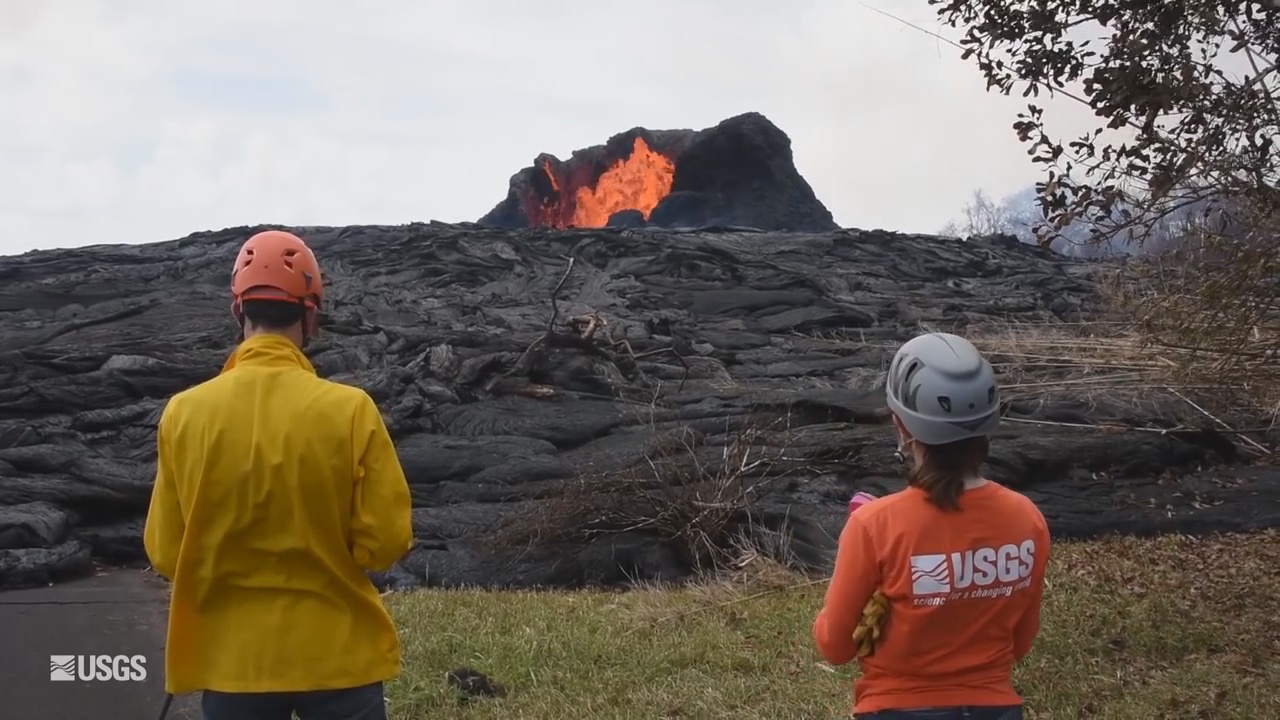 image from file video provided by USGS, recorded during the 2018 eruption of Kīlauea

(BIVN) – The scientists with the USGS Hawaiian Volcano Observatory will remain on Hawaiʻi Island, as a search for a permanent home continues.

“The Hawaiian Volcano Observatory is an integral part of the Hawaii Island community, as we saw when HVO scientists worked around the clock with first responders to provide critical information during last year’s volcanic activity,” Senator Hirono said. “It just makes sense that this critical agency remains anchored on Hawaii Island, and I want to thank Dr. Reilly for being receptive to community concerns on this matter.”

HVO scientists had to abandon their headquarters overlooking the summit of Kīlauea in the summer of 2018 when volcanic collapse events severely damaged the building. They have been working out of various temporary locations ever since.

When it was revealed that the USGS was considering all options for a future, permanent HVO headquarters, including the possibility of moving the operation to Oʻahu, Senator Hirono questioned then-Acting Interior Secretary David Bernhardt on the matter during his confirmation hearing.

Hirono also joined Hawaiʻi’s Congressional Delegation in writing a letter to USGS Director Reilly on May 17, urging him to keep HVO on the Big Island. The letter read:

We are writing to express our concerns regarding reports that the USGS is considering relocating the Hawaiian Volcanoes Observatory (HVO) away from Hawai‘i Island. Our local media has confirmed with HVO spokespersons that Oʻahu is being considered as a relocation site. As the USGS discusses the possible options for rebuilding HVO facilities, we would like to emphasize the importance of the HVO’s proximity to the volcanoes it studies, its relationship with the community it serves, and the potential burdens a move may place on HVO personnel.

The HVO sounded the alarm when the Kilauea eruption was imminent, and credibly communicated with emergency responders to evacuate Leilani Estates, Vacationland, Kapoho, and threatened locations in between. Orderly evacuations saved lives, and continued efforts to monitor and forecast allowed many residents to return and salvage their belongings. The level of commitment has been incredible, and we applaud these outstanding scientists and professionals for being a lifeline for Hawai‘i Island residents and the emergency management community.

The successful response to the Kilauea eruption emphasizes the importance of keeping the HVO in close proximity to the community it serves. First responders need immediate access to HVO experts from the first hint that an eruption may occur. The trained eyes of HVO scientists on the eruption can pinpoint to the location of fissures to direct responders and save lives—lives that could be lost during the hours that it could take to fly them in from Oʻahu.

It is also important that the HVO’s forecasts and warnings are credible to the people they affect. HVO personnel currently live in the communities they serve. During the Kilauea eruption, their personal relationships with these communities meant that HVO information was trusted, and that individuals and families heeded warnings and took action to stay safe.

Moving off of Hawai‘i Island would also create problems in the day-to-day operations and personal lives of HVO personnel. For example, coordinating field research from off-island creates formidable logistical problems for HVO scientists. Just the burden of flying samples and equipment to and from Hawai‘i Island would affect the cost and quality of the HVO’s work. A significant portion of HVO staff have also established their lives in Hawaiʻi County. Relocating these expert personnel would pose significant challenges and dramatic changes that could prompt some staff to find other work rather than move their lives to another island.

As a final note, we want to recognize that the HVO has continued its duties despite having been displaced by the Kilauea eruption. Working from temporary spaces, the HVO has continued to provide the highest level of service to the community. We hope the USGS will rebuild the HVO on Hawai‘i Island so that it can maintain proximity and trust with the community it most immediately serves.