HAWAIʻI VOLCANOES NATIONAL PARK - The United States Secretary of the Interior David Bernhardt made his first visit to Hawaiʻi Volcanoes National Park on Thursday, and spoke with media after a tour. 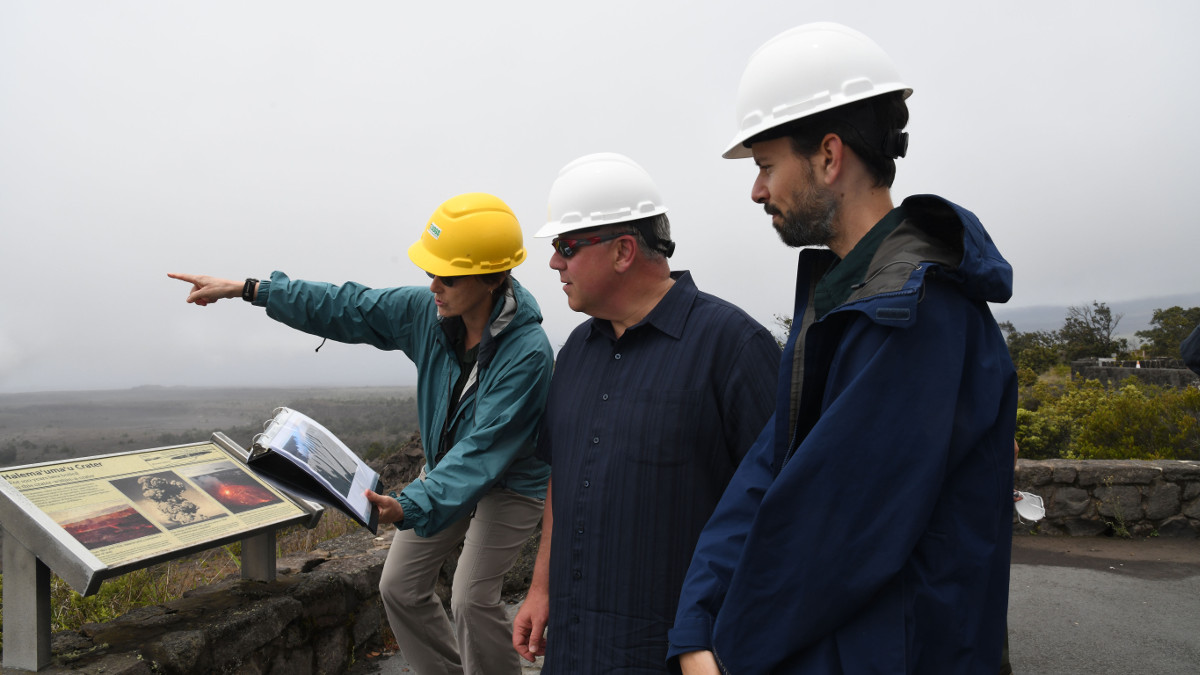 (BIVN) – The United States Secretary of the Interior got a firsthand look at the damages and dramatic changes at Hawaiʻi Volcanoes National Park that were brought about by the 2018 eruption of Kīlauea.

Interior Secretary David Bernhardt toured the Jaggar Museum and the former headquarters of the USGS Hawaiian Volcano Observatory on Thursday, before taking a moment to speak to media assembled just outside the historic Volcano House.

“This morning I had a chance to visit with our employees,” Bernhardt told reporters. “We have some incredible employees here at both at the National Park Service but also with the US Geological Survey, and I was able to commend the team that had spent so much time and effort up here during the event, making sure that folks were getting good information, good data, having that relate down-down site and so that was really great.”

Bernhardt is the top official overseeing the both National Park Service and the U.S. Geological Survey, under which falls Hawaiʻi Volcanoes National Park and the Hawaiian Volcano Observatory, respectively. 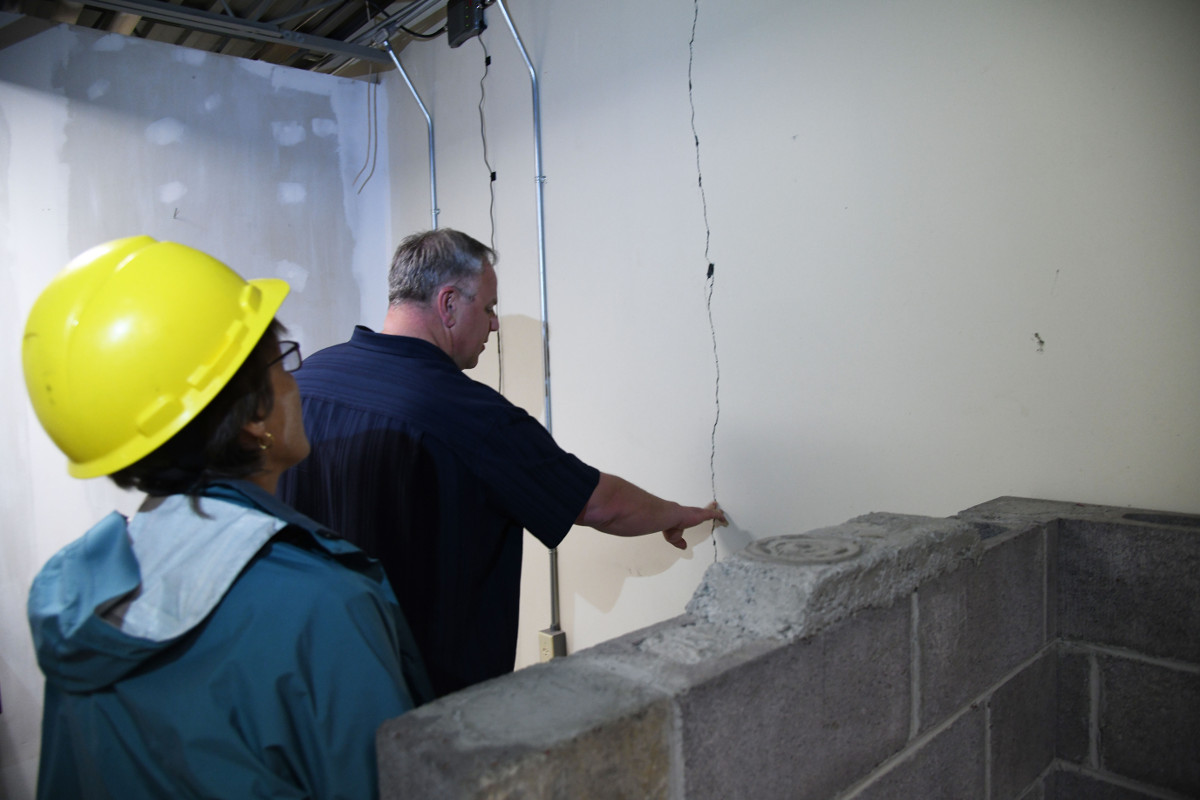 USGS Scientist in Charge Tina Neal and US Dept of the Interior Secretary David Bernhardt, (DOI Photo/Tami A. Heilemann)

Commenting on the damage he saw, Bernhardt told reporters that “when an event of this magnitude occurs, things happen and – obviously, you all lived through an incredible period of that – and so, what we’re doing is looking at our facilities, asking ourselves what potentially do we need to do, or what alternatives do we need to make. Those decisions are still a ways down the road.”

On the potential reopening of Jaggar Museum, Bernhardt noted that “when you stand there at the caldera, my initial reaction, honestly, was – there needs to be something there.”

Bernhardt added that safety is first, but “I think that that site is an incredible site and we need to be very thoughtful about what we do.”

Bernhardt also commented on whether or not it will be possible to keep HVO in the park. Earlier in the day on Thursday, Senator Mazie Hirono (D-Hawaiʻi) said the scientists with HVO will remain on Hawaiʻi Island, citing information she received from USGS Director Dr. Jim Reilly. 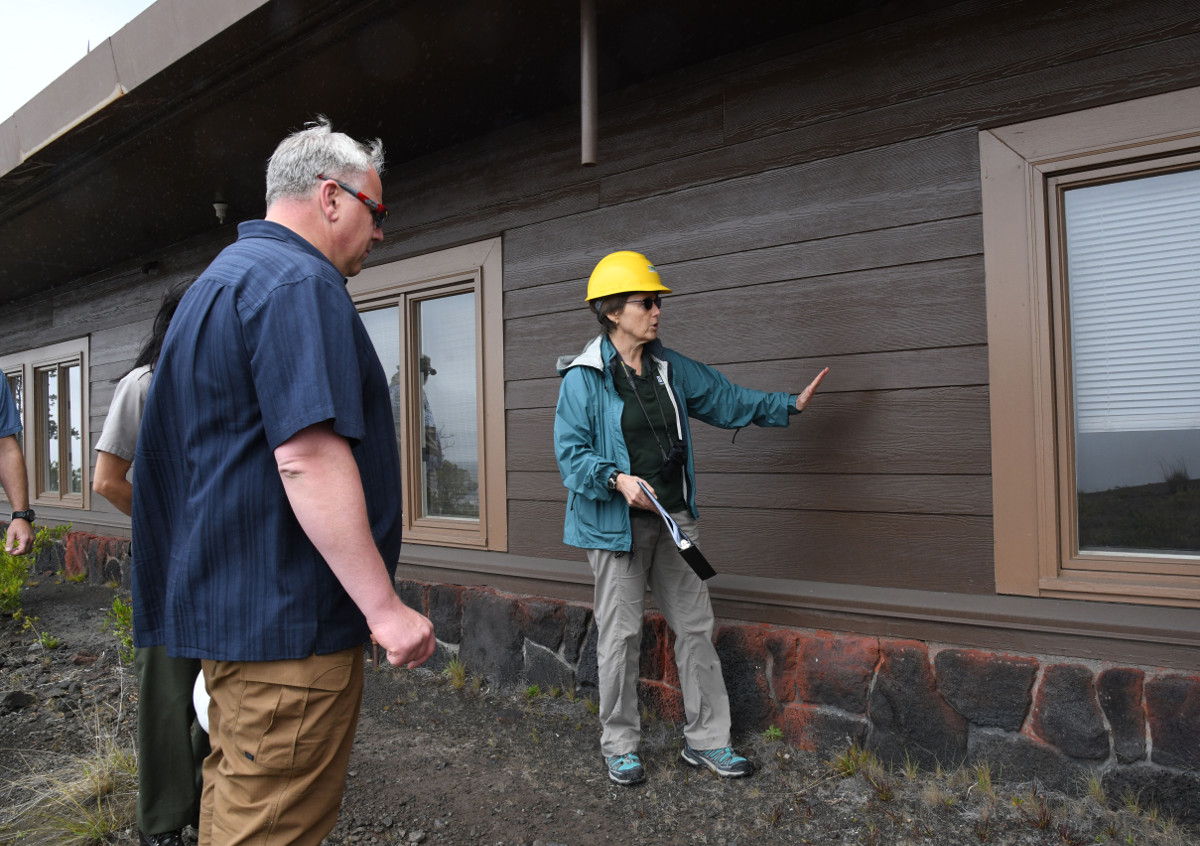 “I don’t think there’s any issue, given the history of the U.S. Geological Survey being here,” Bernhardt said. “It is a very fair statement to say that they certainly are very closely related to the island. We have not made the call on whether they’ll be in the park or not. It’ll be a call that Iʻll be totally involved in.”

Bernhardt added, “I have a hard time believing it won’t be” on the Big Island.

At the time of the media availability, Bernhardt said he had yet to meet with Governor David Ige or Mayor Harry Kim.

“I’m a guy from western Colorado, you know, so anytime you can come up and see a major volcano and and see a picture of before – here’s where the land was – and after, it’s a pretty significant event,” the Interior Secretary said. “What I really probably didn’t appreciate before I got here – and this isn’t something I witnessed – but the concept of the length of time that this event went on, and for not only our employees who were working here, but also live here, but for your entire community. Going through the grind of that over a long period of time, in my mind, had to be a very significant thing.”

“I think I walk away with a much greater appreciation of that than anything else,” Bernhardt said.

“This park is a great asset,” Bernhardt concluded. “We just need to make sure things are squared away. But from my perspective, it looks like revenues are starting to go up, visitations going up. It’s interesting that… if you look at this historically, when there’s activity going on, that actually drives visitation up. So it’s hard to say, ‘hey, there was activity and that’s bad’ when it’s also one of the reasons people came here as an attraction.”