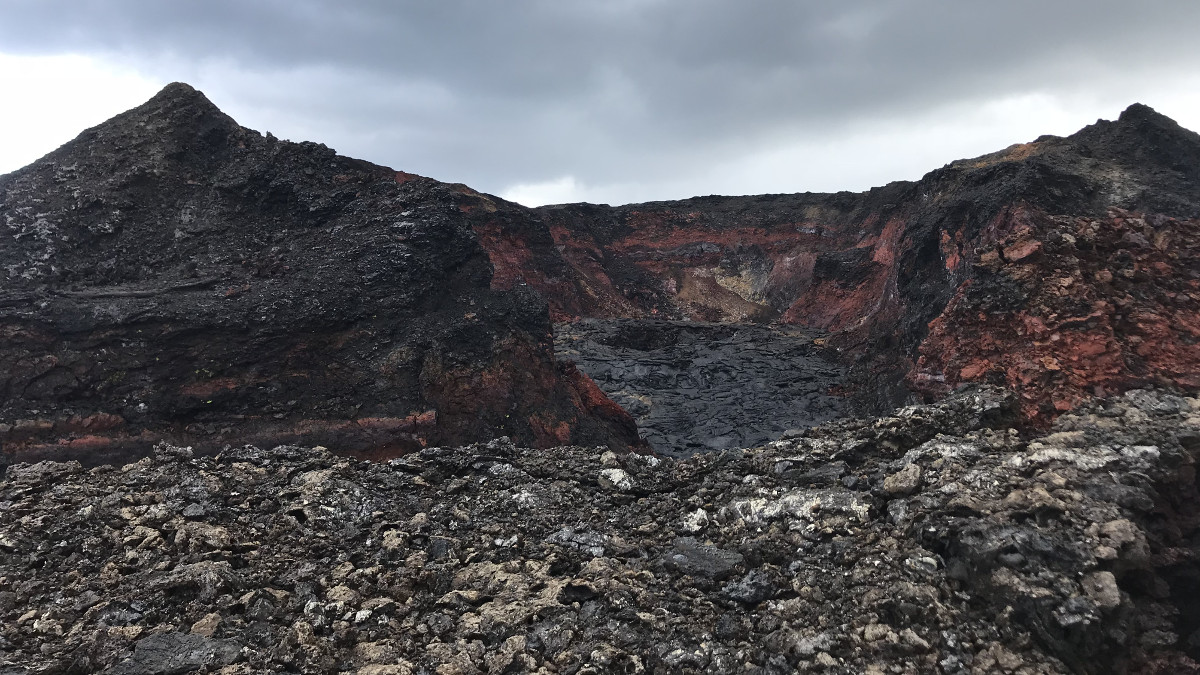 USGS image of Fissure 8 by C. Parcheta. The tan and gray rock in the foreground is the exterior surface of a lava levee on the opposite side of the fissure 8 spillway, USGS says. This view is to the southwest.

HAWAIʻI ISLAND - The USGS Hawaiian Volcano Observatory says there have been no changes detected on Kīlauea Volcano this week, and crews even took a field trip to check on Fissure 8.

(BIVN) – Things remain quiet on Kīlauea. The volcano is not erupting and remains at a NORMAL/GREEN alert level.

Scientists with the USGS Hawaiian Volcano Observatory say they visited Fissure 8 on on Kīlauea Volcano’s lower East Rift Zone on June 3, in order to conduct a routine check on the dormant vent and webcam.

“The purpose of the trip was to change batteries in the webcam and make visual observations of fissure 8’s cone and interior,” HVO wrote in an image caption posted Tuesday. “No steam or fumes were visible and only a faint smell of sulfur was momentarily detected.”

Meanwhile, Kīlauea monitoring data from the past nine months “have shown steady rates of seismicity, deformation, and low rates of sulfur dioxide emissions at the summit and East Rift Zone, including the area of the 2018 eruption,” the scientists say.

This week’s HVO activity update is much the same as last week’s report:

Observations: Monitoring data have shown no significant changes in volcanic activity over the past week. Rates of seismicity across the volcano have not changed much over the past several months, with earthquakes occurring primarily in the summit and south flank regions. The largest Kīlauea earthquake over the past week was a M2.5 event on Kīlauea’s southwest flank on June 3, at a depth of 6 km (4 miles) below sea level. No felt reports were submitted for this earthquake, or any other earthquake under Kīlauea volcano this week.

Since early March, GPS stations and tiltmeters at the Kīlauea summit have recorded deformation consistent with slow magma accumulation within the shallow portion of the Kīlauea summit magma system (1-2 km or approximately 1 mile below ground level). However, gas measurements have yet to indicate significant shallowing of large volumes of melt. HVO continues to carefully monitor gas output at the Kīlauea summit and East Rift Zone for important changes.

Further east, GPS stations and tiltmeters continue to show motions consistent with refilling of the deep East Rift Zone magmatic reservoir in the broad region between Puʻu ʻŌʻō and Highway 130. This trend has been observed since the end of the 2018 eruption, however there is an indication on tiltmeters that this motion has been slowing down over the past couple weeks. While the significance of this pattern is unclear, monitoring data do not suggest any imminent change in volcanic hazard for this area.

Hazards remain in the lower East Rift Zone eruption area and at the Kīlauea summit. Residents and visitors near the 2018 fissures, lava flows, and summit collapse area should heed Hawaii County Civil Defense and National Park warnings. Hawaii County Civil Defense advises that lava flows and features created by the 2018 eruption are primarily on private property and persons are asked to be respectful and not enter or park on private property.

The Hawaiian Volcano Observatory (HVO) continues to closely monitor seismicity, deformation, and gas emissions for any sign of increased activity at Kīlauea. HVO maintains visual surveillance of the volcano with web cameras and occasional field visits. HVO will continue to issue a weekly update (every Tuesday) until further notice, and will issue additional messages as warranted by changing activity.