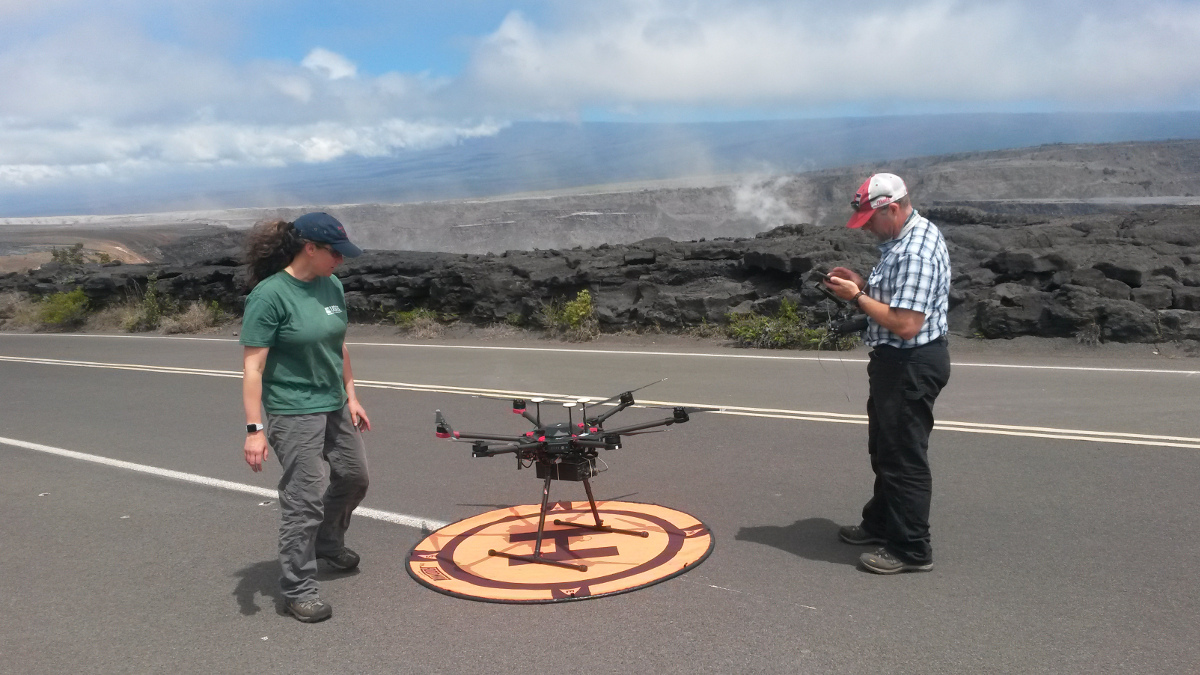 Two U.S. Geological Survey UAS pilots perform a routine inspection of a UAS system prior to a flight at the summit of Kīlauea Volcano in June 2018. The UAS for this particular flight was outfitted with a multi-gas sensor to identify any new degassing sources within the collapsing summit caldera. All UAS flights inside Hawaiʻi Volcanoes National Park were conducted with explicit permission of the National Park Service. USGS photo by P. Nadeau.

HAWAIʻI ISLAND - There are new eyes in the sky for monitoring Hawaiian volcanoes, according to scientists in this week's Volcano Watch article.

The Hawaiian Volcano Observatory (HVO) is no rookie when it comes to using flight to assist with monitoring Hawaiian volcanoes. Helicopters and fixed-wing aircraft have transported HVO volcanologists for decades, giving them access for visual and thermal observations, equipment maintenance, and other geophysical and geochemical measurements. But the 2018 eruption of Kīlauea Volcano presented an opportunity for HVO, part of the U.S. Geological Survey (USGS), to adopt a new airborne technology – Unmanned Aircraft Systems (UAS, or ‘drones’) – to better monitor the eruption than with manned flight alone.

Previously, the University of Hawaiʻi at Hilo used UAS to map the 2014 Pāhoa lava flow. Other external collaborators have also previously flown short campaigns at Kīlauea’s summit and at Puʻu ʻŌʻō with permission of Hawaiʻi Volcanoes National Park. But before the 2018 eruption, the USGS itself had not employed UAS to monitor an eruption in Hawaii.

In 2018, however, UAS teams from across the USGS, as well as other agencies within the U.S. Department of the Interior, were mobilized for the Kīlauea eruption response. Through most of the activity, UAS crews worked 24/7, sometimes splitting into multiple teams so that measurements could be made at both the summit and lower East Rift Zone of Kīlauea simultaneously.

The most basic capability of the UAS during the 2018 eruption was simple video imaging and streaming. This allowed for documentation of eruptive features that would not otherwise have been accessible for study due to hazardous conditions.

In a more practical sense, UAS imaging also offered enhanced situational awareness for the eruption response. UAS images helped identify where new lava breakouts were happening or were likely to occur. In one instance, a USGS UAS helped with the evacuation of a Puna resident as a lava flow quickly approached.

Some of the UAS were outfitted with thermal cameras, which provided images that were used to create detailed maps of the lava flows. Thermal imagery was also used to identify the hottest, most active portions of the flow field, which was particularly useful when visible images were not able to differentiate between slightly older and slightly newer flows.

More technical applications of UAS-based imaging included the creation of digital elevation models (DEMs) and measurements of lava flow speeds within channels. By using imagery to determine the height of newly emplaced lava, the new DEMs could be compared to pre-eruption DEMs to calculate the volume of lava erupted.

At Kīlauea’s summit, DEMs helped HVO assess the new landscape of the collapsing caldera and determine just how much collapse was occurring. Along the rift zone, videos taken above fast-flowing lava channels helped with calculations of how much and how quickly lava was erupting from the fissures.

Beyond the UAS imaging opportunities, the 2018 eruption was the first time that the USGS mounted gas sensors on UAS in Hawaii. The fissures were too dangerous to approach on foot to measure the gas chemistry, but a multi-gas sensor mounted on a UAS helped determine the chemistry of the eruptive plumes.

Likewise, at the summit, with collapse events and potential explosion hazards, ground-based gas measurements within Kīlauea caldera were not possible. UAS-based measurements were the only safe method for measuring the location, chemistry, and amount of volcanic gas released at the summit.

Having UAS capabilities for the 2018 eruption enabled HVO to obtain crucial data that would otherwise have been difficult or impossible to obtain. However, you may have noticed that while this article refers to UAS teams from across the USGS traveling to Hawaiʻi for the eruption response, it makes no mention of in-house HVO pilots. That’s because, in 2018, HVO didn’t have any certified UAS pilots with the skills required for flying in hazardous areas. But that will change in the coming months.

Several HVO staff members will become licensed UAS operators later this year, allowing HVO to add UAS capabilities to our monitoring repertoire. We will then be able to use UAS to aid in our mission-critical monitoring work and will be poised to deploy UAS at a moment’s notice to collect important datasets the next time a Hawaiian volcano acts up.