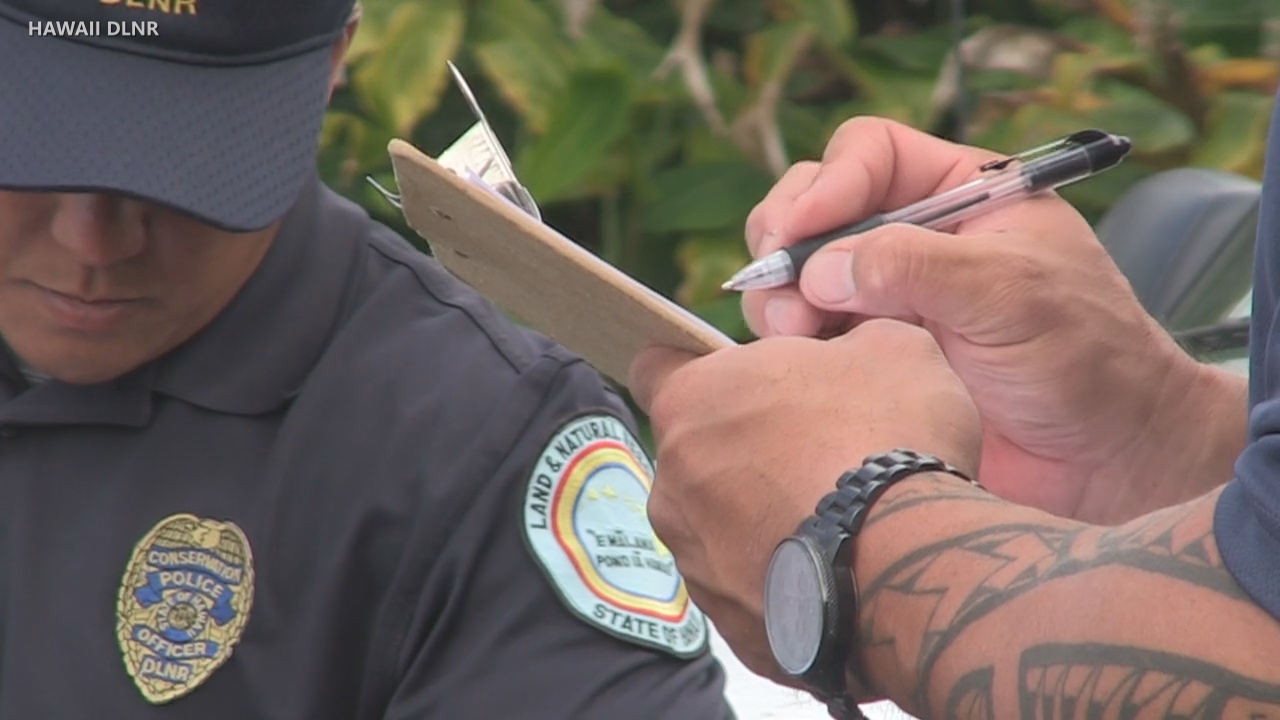 image from video by Hawaii DLNR

(BIVN) – Hikers attempted to access what is known as the White Road trail were stopped by law enforcement and issued written warnings on Kamehameha Day.

According to the Hawaiʻi Department of Land and Natural Resources, Division of Conservation and Resources Enforcement (DOCARE) officers contacted hikers along the path in the Kohala Forest Reserve. The White Road trail is closed for safety reasons, but officials say it has unfortunately been advertised widely on social media and the Internet as “a great hike to do at your own risk.”

The Hawaiʻi DLNR distributed video of the DOCARE officers blocking one pair of hikers en route to the trail. A similar operation took place two years ago.

Unlike two years ago when officers cited more than 100 hikers here for trespass into a closed area, the few hikers contacted yesterday were informed about the closure and given warnings.

“The issue of people ignoring warning and closure signs and putting themselves and first-responders into danger just won’t go away,” said DOCARE Enforcement Chief Jason Redulla. “We put a great deal of time and energy into patrolling closed parks and trails, when we could be devoting our resources to the myriad of other issues that our officers are responsible for across the state,” he added.

The state noted that six people were also cited by DOCARE officers for trespassing at the closed Sacred Falls State Park on Oʻahu on the same day, after frightening encounter with a rockslide left one hiker injured. The injured hiker referred to the moment of the rockfall as “15-seconds of terror”.

DLNR Chair Suzanne Case concluded, “We don’t want anyone, including first-responders from our agency and many others, to experience 15-seconds of terror, as the people at Sacred Falls felt yesterday. There are hundreds of miles of legal and safe trails for people to enjoy across the state, so there is no reason for people to ignore the signs and warnings.”