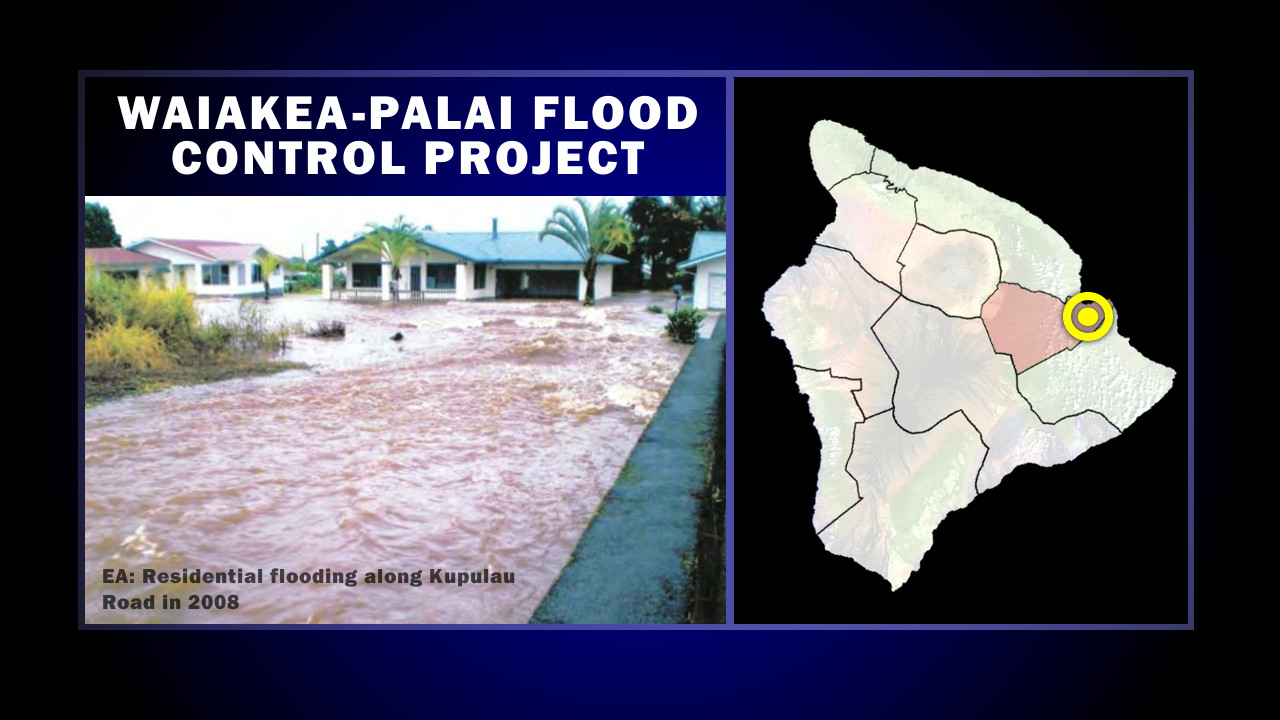 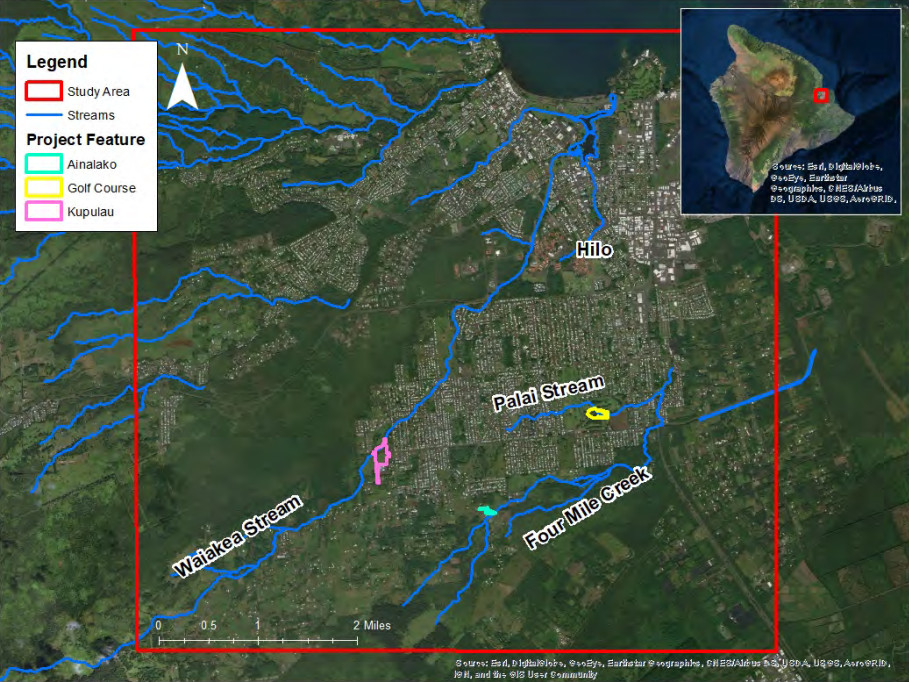 The U.S. Army Corps of Engineers, Honolulu District, and the County of Hawaiʻi Department of Public Works have produced a Draft Environmental Assessment and Draft Integrated Feasibility Report for the Waiakea-Palai Flood Control Project, which details the planning process for evaluating potential stream bank protection alternatives in the area.

The study area encompasses the Waiakea Stream, Palai Stream, and Four Mile Creek – which are three of the five tributaries within the Wailoa River system that drains about 160 square miles into Hilo Bay – and evaluates and compares the benefits, costs, and impacts of several alternatives.

According to the document:

The Waiakea and the Palai Streams are susceptible to flash flooding events where peak discharges typically occur within two hours of heavy rainfall. Local storm events can produce flood conditions in a matter of hours. Significant rainfall events result in overland flow of water throughout the watershed, flowing towards the streams (Figure 2-1). The existing stream channels have limited capacity to transport flood waters, which has led to water overtopping the channel and flooding downstream areas. In addition, the City of Hilo has experienced significant growth over recent decades. With this surge in urbanization, flooding problems have intensified for homes and businesses built close to the city’s streams (Figure 2-3).

There are an estimated 121 homes and businesses in the Palai Stream flood plain and 17 in the Waiakea Stream flood plain, “with sufficient expected annual flood damages to justify an expenditure of the magnitude it would take to present them with an individual nonstructural flood prevention option,” the draft document states.

The draft document favors a three alternatives: the Kupulau Ditch Detention, Hilo Municipal Golf Course Detention, and Ainalako Diversion, which together are known as the Tentatively Selected Plan. The Tentatively Selected Plan includes construction of detention basins, a diversion channel, levees, and floodwalls to reduce flood risk in the study area. 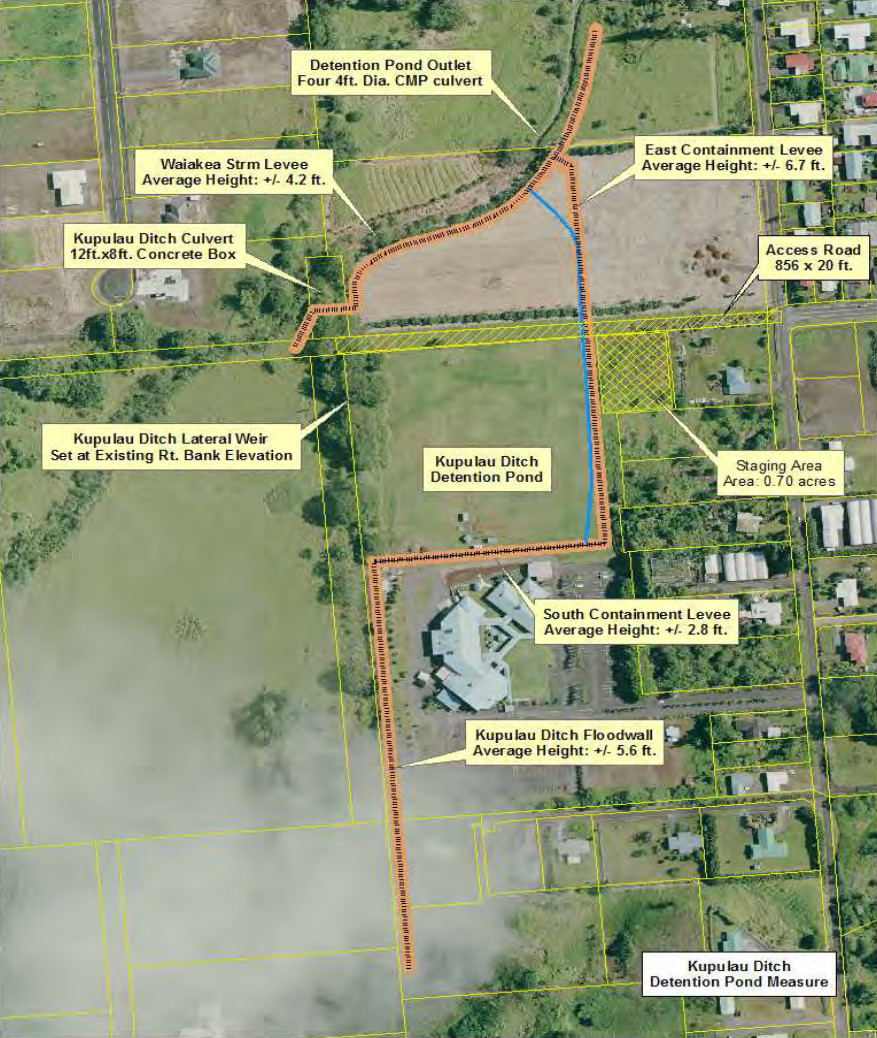 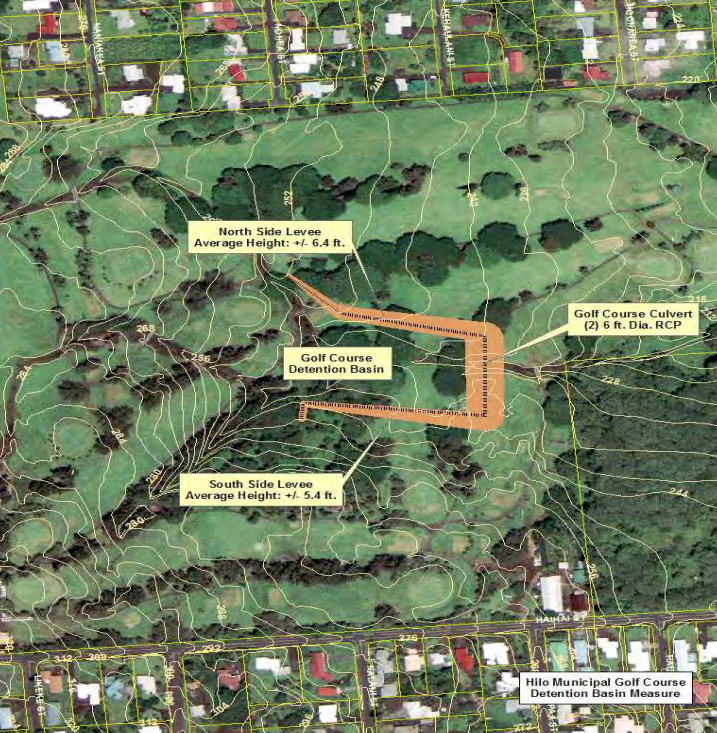 The embankment constructed to create the detention pond would have a maximum height of approximately 22 feet from the channel bottom (Figure 5-3). An in-channel barrier with an uncontrolled outlet consisting of three (3) four-foot diameter aluminized steel pipes would be constructed. The barrier has a total length of about 823 feet. Side embankments located on the north and south sides of Palai Stream prevent flow from escaping the stream. The in-channel portion of the structure has a height of about 10 feet. The north embankment has an average height of about 2.4 feet, while the south embankment has an average height of about 2.1 feet. Grouted riprap on both the upstream and downstream face of the in-channel embankment is required to protect it from erosion. Analysis of this structure has a storage volume of about 7 acre-ft. at the 1% AEP event and about 12 acre-ft. at the 0.2% AEP event. 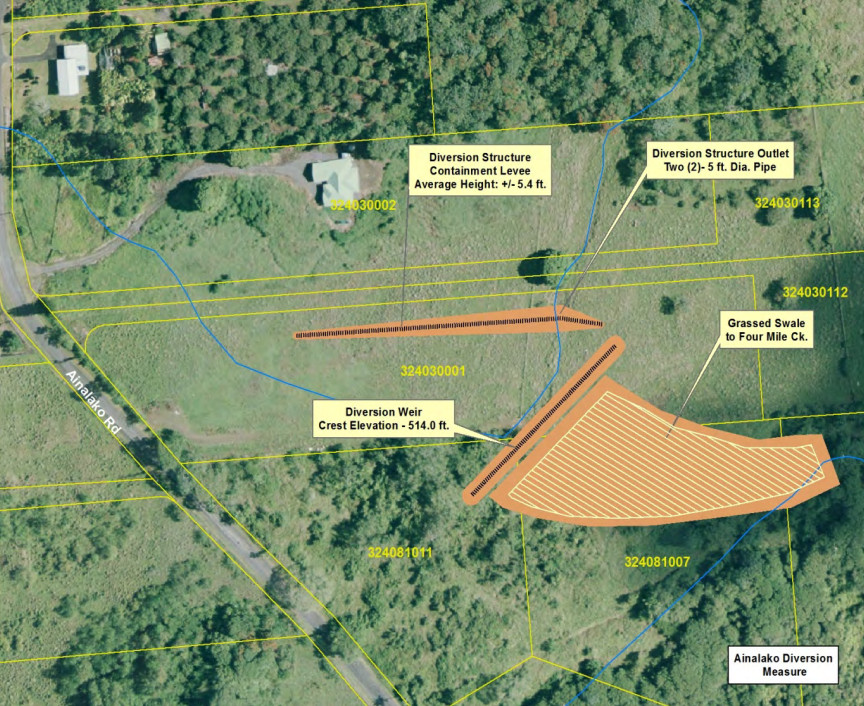 Along the right overbank of Palai Stream there exists a natural depression between two small mounds, creating what can be referred to as a “saddle” effect. Under without-project conditions, water overtops the saddle and enters Four Mile Creek. The difference in elevation between the Palai Stream channel bottom and the saddle is about 3 feet. The “saddle” has a minimum elevation of 514.0 feet. At that elevation, the weir is 200 feet in length. Under without-project conditions, the overflow is covered with scrub brush and tall grasses, making the overflow very inefficient. Increasing its efficiency will allow an increase in flow over the weir. A grassed swale will be constructed to direct the overflow from the weir into four Mile Creek. This swale will utilize the natural topography of the land. It is estimated that this swale will be about 276 feet in length and an average of about 182 feet in width, resulting in an area of about 1.2 acres.

Also considered: Waiakea Stream Channelization, Hilo Municipal Golf Course Diversion (rather than detention), HaiHai Street Detention, and a Non-Structural Alternative. These alternatives were not found to be feasible.

The total project first cost of the Tentatively Selected Plan is $11,860,000, the document states. “The Kupulau Ditch feature is the costliest feature at $6.6 million and expected annual cost (EAC) of $402,000,” the draft document says, “but it also yields the highest expected annual benefits (EAB) of $1,910,000.”

The document also provided this summary of impacts from recent events is described below: