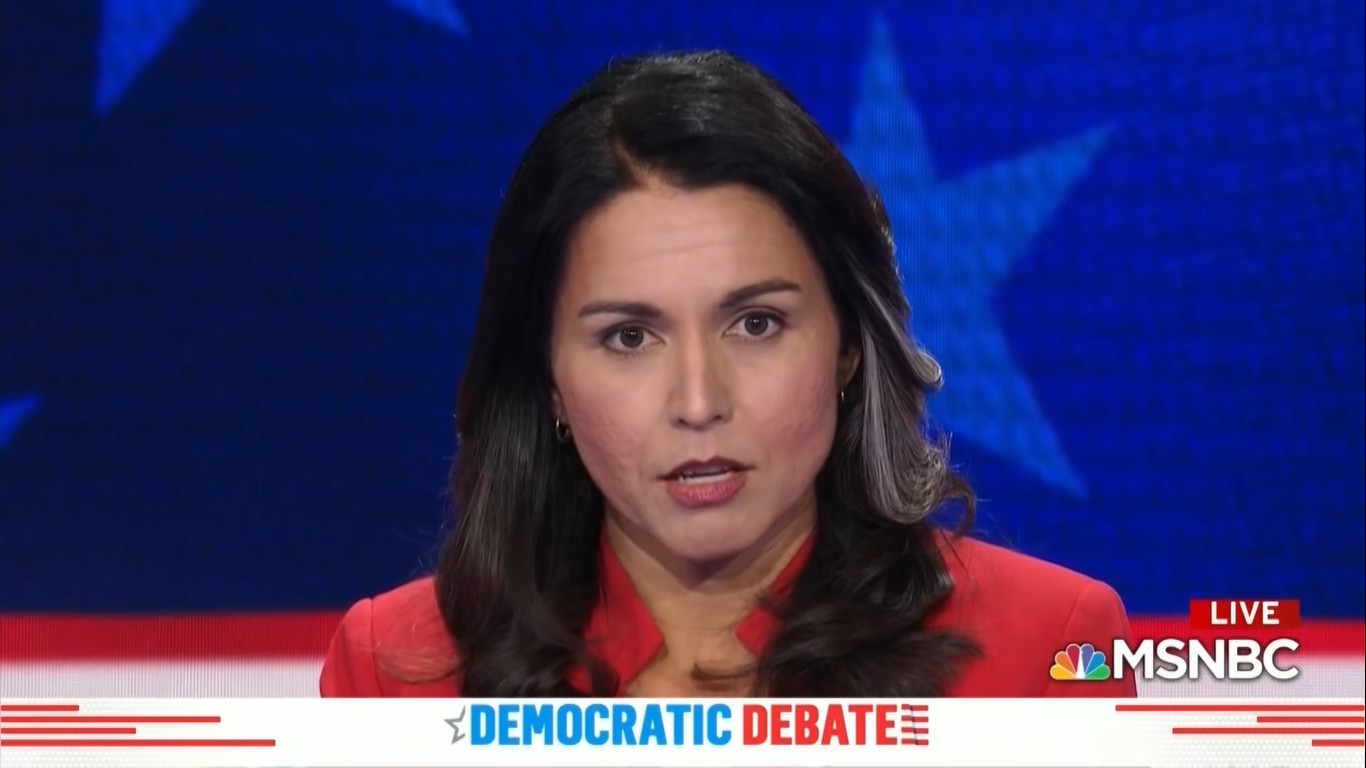 Rep. Tulsi Gabbard was one of the 10 candidates running for U.S. President who took the stage on the first night of MSNBC coverage. On Thursday night, 10 different candidates will debate. All 20 are looking to separate themselves from the pack as they seek the Democratic party nomination, challenging Republican incumbent Donald Trump for the presidency in 2020.

Gabbard was at her best when talking about foreign policy, which has been the primary focus of her campaign messaging. Gabbard is the first female combat veteran to ever run for president, and is a major in the Army National Guard. Gabbard deployed twice to the Middle East.

Searches for Gabbard were trending online throughout the country during and after the debate, “with her name surging to the very top of Google’s top searched candidate list for night one,” the campaign stated.

Several news articles followed the search trends and put Gabbard at the top. Sources also say Corey Booker was the top Google search during the debate. 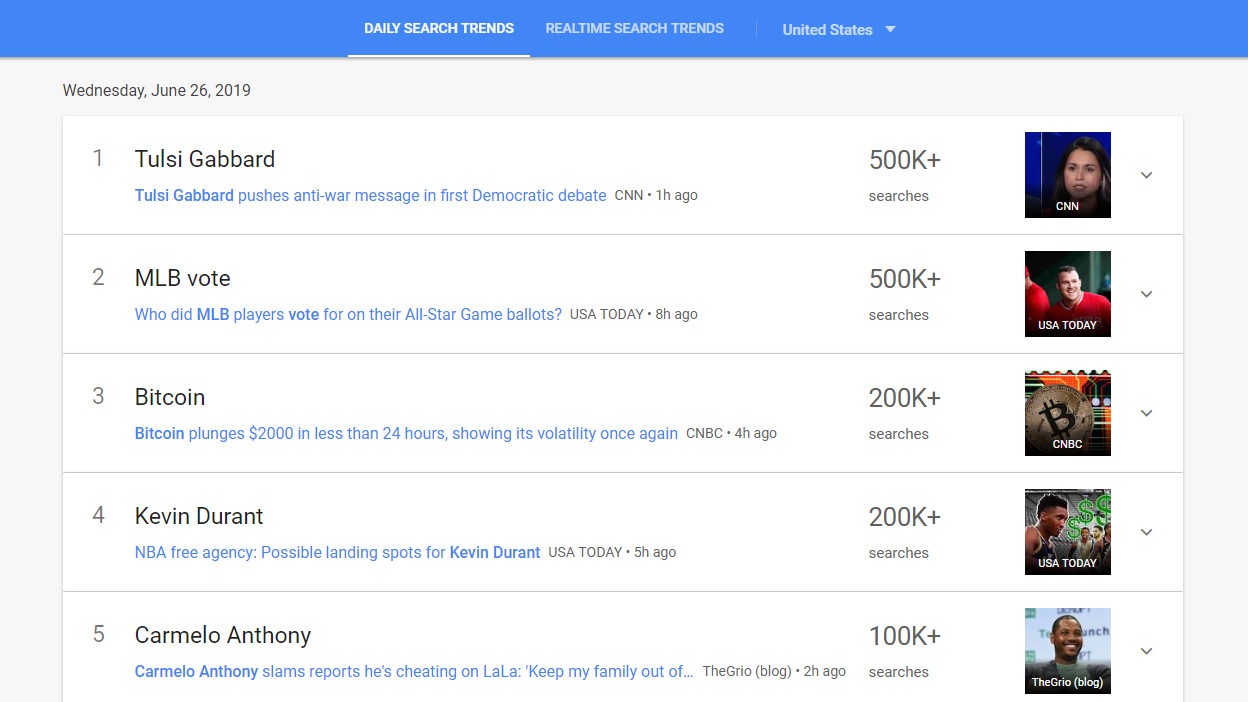 Gabbard’s breakthrough moment may have come when she jumped in on Rep. Tim Ryan’s answer on a foreign policy question, taking the Ohio Congressman to task for saying America has to “be engaged” by keeping troops in places like Afghanistan. Gabbard responded:

“Is that what you will tell the parents of those two soldiers who were just killed in Afghanistan? Well, we just have to be engaged? As a soldier, I will tell you that answer is unacceptable. We have to bring our troops home from Afghanistan. We are in a place in Afghanistan where we have lost so many lives. We have spent so much money. Money that’s coming out of every one of our pockets. Money that should be going into communities here at home. Meeting the needs of the people here at home. We are no better off in Afghanistan today than we were when this war began. This is why it is so important to have a president — commander in chief who knows the cost of war and is ready to do the job on day one. I am ready to do that job when I walk into the Oval Office.”

Gabbard also corrected Rep. Ryan when he appeared to say the Taliban “started flying planes into our buildings” when the U.S. wasn’t there. “The Taliban didn’t attack us on 9/11. Al-Qaeda did. Al-Qaeda attacked us on 9/11,” Gabbard said.

Gabbard’s message on foreign policy has been consistent over the years, and now has new resonance as tensions increase between Iran and the United States. In recent days, she made her point: “No war with Iran.”

“We must stop President Trump before he goes so far down the track of war with Iran that there’ll be no turning back,” she wrote.

She had the chance to speak on the topic on the Miami debate stage:

“This president and his chickenhawk cabinet have led us to the brink of war with Iran. I served in the war in Iraq, at the height of the war in 2005. A war that took over 4,000 of my brothers and sisters in uniforms lives. the American people need to understand that this war with Iran would be far more devastating, far more costly than anything that we ever saw in Iraq. it would take many more lives, it would exacerbate the refugee crisis, and it wouldn’t be just contained within Iran. this would turn into a regional war.”

Gabbard also answered a tough question about her early campaign apology, in which she tried to address her past stances and statements on gay rights. When asked “why should voters in that community or voters who care about this issue in general, trust you now?”, she responded:

“Let me say that there is no one in our government at any level, who has the right to tell any American who they should be allowed to love or they should be allowed to marry my record in Congress for over six years shows my commitment to fighting for LGBTQ equality. I serve on the equality Caucus and recently voted for passage of the equality act. Maybe many people in this country can relate to the fact that I grew up in a socially conservative home, held views when I was very young that I no longer hold today. I’ve served with LGBTQ service members both in training and deployed downrange. I know that they would give their life for me and I would give my life for them. It is this commitment that I’ll carry through as president of the United States, recognizing that there are still people who are facing discrimination in the workplace, still people who were unable to find a home for their families. It is this kind of discrimination that we need to address.”

Gabbard’s campaign noted that the Hawaiʻi congresswoman’s performance was described as “the most composed and authentic” in a tweet by Meagan McCain, who also noted that she disagrees with Gabbard “on everything”.

A Washington Post video, on the other hand, said Gabbard had a “shaky delivery and ignored questions”.

“Is it just us, or does it seem like every other question has gone to Elizabeth Warren?” the message questioned.

Thursday evening is part two of the debate, featuring a different set of Democratic candidates, including the man Gabbard endorsed for President in 2016, Bernie Sanders.