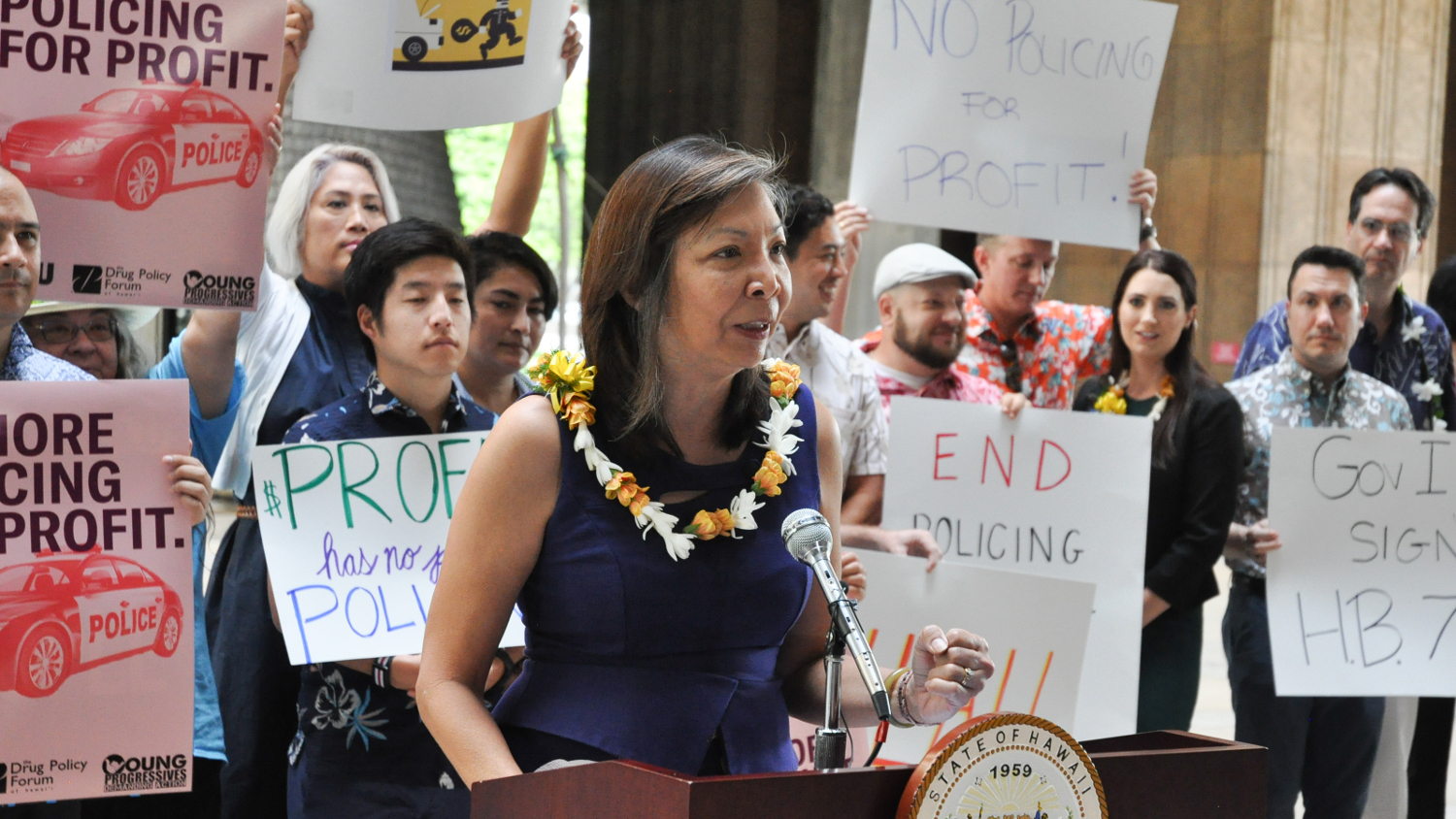 HONOLULU, Hawaiʻi - Governor David Ige said he is considering killing House Bill 748, which would allow asset forfeiture only after a criminal is convicted of a felony.

(BIVN) – On Tuesday, residents and representatives raised their voices, urging Governor David Ige not veto House Bill 748 which prevents the seizing and selling of assets from a person arrested but not convicted of a crime.

A news conference, held in front of the Hawai‘i State Capitol Rotunda on Oʻahu, was attended by local lawmakers, concerned citizens, the American Civil Liberties Union, the Drug Policy Forum of Hawaiʻi and Young Progressives Demanding Action. They all spoke in support of HB748 HD2 SD2, which would require a criminal conviction before law enforcement could forfeit property, and any forfeiture revenue would be directed into the state’s general fund, instead of into police and prosecutor’s office budgets.

The coalition opposing the veto says that under current civil asset forfeiture laws, police can seize property suspected of being connected to criminal activity, even if the owner is never charged with or convicted of a crime.

Governor Ige included the bill among those he intends to veto, saying:

House Bill 748 was introduced by Puna’s State Rep. Joy A. San Buenaventura. She said an audit of the Attorney General’s Forfeiture Program in 2017 showed there are no rules in place to return assets to a person not convicted of any crime.

“Assets from innocent people have been taken and sold for 35 years. It is time to change that,” said Rep. San Buenaventura. “This bill will make sure that assets are only taken away from criminals, not innocent people.”

Many of San Buenaventura’s constituents have been vocal supporters of the bill. In a recent letter to news editors, Puna resident Sara Steiner said she was “flabbergasted that no one provided the Governor a copy” of the audit of the Attorney General’s Asset Forfeiture Program, and wrote:

Really, the unconstitutional open theft of Hawaii residents property has been going on since 1970, almost 50 (FIFTY) years and the AG can’t make rules?!? Of course not – the program is unconstitutional – you can’t make something right just because you make some rules saying it is right.

The police and prosecutors focus their manpower on and fund their budgets by this federally-sanctioned highway robbery – leaving no manpower available to respond to 911 calls for help. Don’t believe me? Audit the Hawaii County Police Department 911 call system. In fact, the Hawaii County Police Department HAS NEVER BEEN AUDITED IN ITS EXISTENCE – the main reason they can continue to be corrupt, including stealing evidence from the police lockers where only 1 cop ends up taking the fall for them all….

Governor Ige, please take your name off that forfeiture veto, you have several days to change your mind!

“Law enforcement agencies have publicly admitted they have a financial incentive to seize people’s property in order to fund their own salaries and operations, which is unethical, unjust, and undermines public trust in law enforcement,” said Rep. Chris Lee (Kailua, Waimānalo).

“But law enforcement must wait for a felony conviction before they can sell off any seized assets,” Rhoads said.

The Grassroot Institute of Hawaii also spoke out in a media release. “I am disappointed that Gov. Ige plans to block much-needed reform of Hawaii’s civil asset forfeiture laws, which trample on the individual property rights of Hawaii residents,” said Keli‘i Akina, Ph.D., Grassroot Institute of Hawaii president. “By introducing a higher standard for forfeiture, HB748 would take an important step in addressing many of the concerns raised in the audit,” Akina said. “Currently, there is nothing in the system preventing the abuse of asset forfeiture laws, making our residents vulnerable to corruption.”

Eighteen other states already require criminal convictions before forfeitures can be initiated.