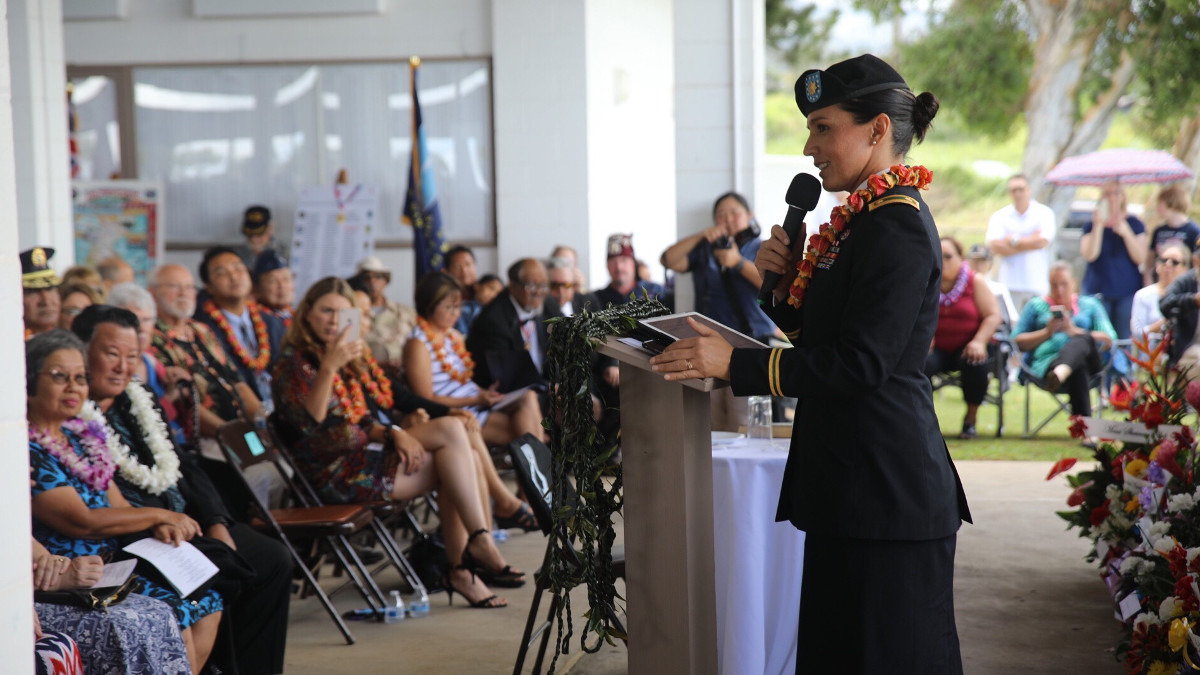 Rep. Gabbard at a Memorial Day event on Maui in 2018, courtesy Office of Congresswoman Gabbard

HAWAIʻI ISLAND - The U.S. Congresswoman representing Hawaiʻi Island, and a presidential candidate for the 2020 election, shares her message on the 4th of July.

(BIVN) – As Washington marks Independence Day with a “Salute to America” that is not without some political controversy, Hawaiʻi Island’s congressional representative and 2020 presidential hopeful, Tulsi Gabbard, is sharing a message of her own.

In a campaign email timed to coincide with the July 4th holiday, Gabbard is telling America “let’s take patriotism back.”

“People are coming from far and wide to join us today and tonight for what is turning out to be one of the biggest celebrations in the history of our Country, SALUTE TO AMERICA, an all day event at the Lincoln Memorial, culminating with large scale flyovers of the most modern… and advanced aircraft anywhere in the World,” tweeted President Donald Trump. “Perhaps even Air Force One will do a low & loud sprint over the crowd. That will start at 6:00P.M., but be there early. Then, at 9:00 P.M., a great (to put it mildly) fireworks display. I will speak on behalf of our great Country!”

Gabbard, whose performance at the recent Democratic debate appeared to resonate with some conservatives, wrote this:

Since 9/11, I’ve watched as patriotism was used as an excuse for disastrous regime change wars and surveillance of the American people, as a euphemism for bigotry, and as a cover for McCarthyist hysteria and the lead up to a new Cold War and nuclear arms race.

But that’s not what patriotism is, and it infuriates me to see it abused. Patriotism is the reason I and so many of my fellow servicemembers put our lives on the line to defend our country. Patriotism is not about symbols or fake outrage. It’s about love – real, active love.

So let me tell you why I love my country.

I love our land – our forests and mountains, our rivers rolling through vast wilderness, our canyons, deserts, swamp lands and prairies – the places that have formed us in all their disparate beauty.

I love our people – drawn from every corner of the planet, every creed and every color, pulled by a promise of a better life, a new beginning, a recognition that we are all equal in the eyes of God.

I love our heritage – the tradition of representative democracy embodied in our indigenous communities that served as a model for our first Congress, those who fought to defeat the institution of slavery as former slaves, abolitionists and soldiers, the strength of our movements for women’s suffrage, labor rights, civil rights and environmental justice.

Most of all, I love our freedom. The freedom endowed by our creator. The freedom that is enshrined in our Constitution and our Bill of Rights. The freedom we fight to protect:

So this July 4th, let’s celebrate by remembering why we love our country, and commit to standing up to protect our freedoms — to live, think, worship and love in peace.