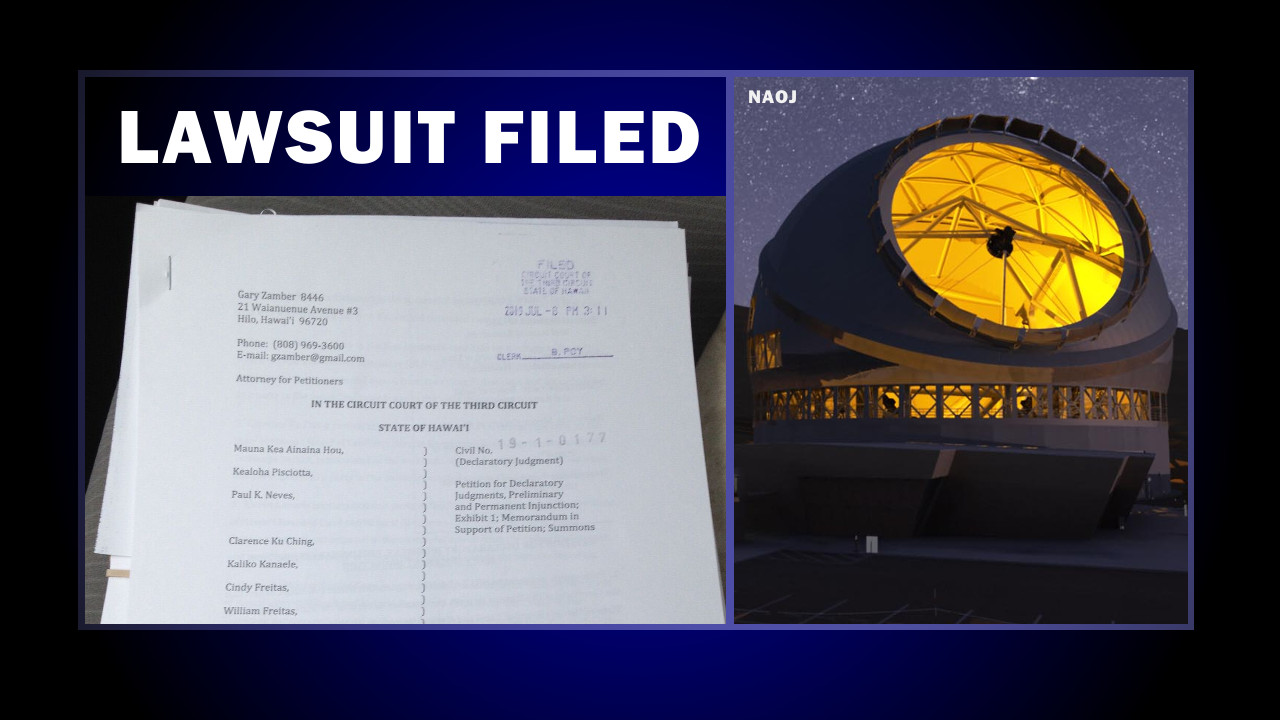 HAWAIʻI ISLAND - Opponents of the Thirty Meter Telescope project planned for Mauna Kea filed a new legal challenge to the project which has already been given a Notice To Proceed by the state.

(BIVN) – A new legal challenge to the planned Thirty Meter Telescope project has been filed in the Third Circuit Court of Hawaiʻi.

A group of petitioners – TMT opponents who, in the filing, are represented by attorney Gary Zamber – are taking the State of Hawaiʻi, the Board of Land and Natural Resources, the University of Hawaiʻi, and the TMT International Observatory to court, and asking for a Declaratory Judgement and Preliminary and Permanent Injunction.

According to Pisciotta, the lawsuit was filed for “UH and TMT’s failure to ensure” that the TMT project had “posted a security bond in the amount of the full cost of the project ($1.4 – $2 billion dollars) as the Mauna Kea Plan Of 1977 requires.”

The most recent management plan, the Mauna Kea Science Reserve Master Plan, was adopted in 2000.

“By failing to post the bond they have laid all financial liability on the People of Hawai’i, in the event the TMT doesn’t get full funding,” Pisciotta said, “and this is especially important because they don’t have full funding now.”

On June 20th, the state announced the TMT project was given a Notice To Proceed. “Staff from the Office of Conservation and Coastal Lands (OCCL) met with the TMT design team to review the construction documents on March 11, 2019,” the state said. “The plans that were submitted are consistent with the Environmental Impact Statement (EIS) and the Conservation District Use Application (CDUA).”

A spokesperson for the Hawaiʻi DLNR declined to comment on the lawsuit on Tuesday, saying DLNR does not comment on pending or active litigation.

UPDATE – From the 7-page petition to the court, the following declaratory judgment is sought by the TMT opponents:

The 1977 Mauna Kea Plan requires that, prior to the permit for a project becoming final, the project must post security equivalent to the contract price for the cost of constructing the project.

At no time since BLNR adopted the Mauna Kea Plan has BLNR adopted any modifications to the security requirement found in the Plan.

The security requirement is still in place and applicable to projects proposed on Mauna Kea.

Before construction could legally begin, TIO should have posted the security required by the 1977 Plan.

As of the date this case is filed, TIO has not posted the required security.

The BLNR issuance of a Notice to Proceed, the County and State of Hawaiʻi destruction of ahu and other structures to facilitate the construction of the TMT, and the public statements by the Attorney General and other State officials are sufficient to conclude that the construction process has begun.

The Notice to Proceed issued by BLNR is premature and, therefore, invalid because TIO has not yet posted the required security.

The actions taken by the State and the County of Hawaiʻi to prepare for and/or initiate construction of the TMT violated the requirement for the security to be posted first.

Absent the filing of the required security and the final approval by the Board, TMT cannot proceed to initiate or otherwise pursue construction of the TMT and related facilities.

The BLNR issuance of a Notice to Proceed; the pronouncements of public officials; including the Governor and the Attorney General; and the County and State of Hawai’i destruction of ahu and other structures to facilitate the construction of the TMT are sufficient to conclude that the construction process has begun.

The state’s position on the 1977 Mauna Kea Plan can be found in the BLNR Findings Of Fact No. 362, produced following the lengthy TMT Contested Case hearing. It reads:

The Mauna Kea Plan (1977) is a “policy guide” and “a policy framework for the management of Mauna Kea.” Ex. B.17g at 6, 16. The plan indicates that it is “conceptual” and must be reviewed and updated as time goes on, and circumstances change. Id. at 16. It was the first “master plan” for Mauna Kea and consists of 17 pages. It has obviously been superseded by the much more detailed and extensive planning efforts that are described elsewhere in these findings of fact.

“This filing is totally insane: just a delay tactic,” said TMT supporter Thayne Currie, Yes2TMT, after reading the petition. “The Hawaii Supreme Court already considered and rejected this argument when they upheld the permit.”

Pisciotta said the petitioners are concerned “if they do start up and do all kinds of damage to Mauna Kea” that “they won’t be able to return the land back to its original state — something the the BLNR Permit requires now.”

The bond issue was touched upon in an oft-referenced footnote of the Hawaiʻi Supreme Court’s November 30, 2018 decision affirming the state’s decision authorizing issuance of a Conservation District Use Permit for the TMT. Footnote 29 reads:

[Finding Of Fact] 360 states that “TIO has already received substantial funds and will undertake additional fundraising efforts once a decision has been made as to the project approval.” Although the BLNR addressed funding of decommissioning after completion, it is unclear whether other than an agreement from TIO to perform, the BLNR has adequately ensured that buildings or equipment will not be left behind and the areas used by TMT will be restored in the event full funding is not obtained for completion of construction or insufficient funds for decommissioning are available. Its duties as trustee require that it do so. The BLNR has discretion under Special Condition 43 to impose “[o]ther terms and conditions” on the CDUP. Therefore, the BLNR should ensure that the areas used by TMT will be restored to their natural states at no cost to the State, whether through requiring an appropriate performance bond or through imposing funding and/or other requirements.

Hawaiʻi state senator Kai Kahele read the footnote during a January 24 informational briefing on the TMT held at the State Capitol.

“So, one of the concerns of the Supreme Court was that the Thirty Meter Telescope project does not have full funding for the project,” Sen. Kahele said, pointing out that other agencies’ have required full funding prior to starting construction, “to ensure that the project is built to the completion.”

“Is that something that you’re considering?” Kahele asked.

“The TMT is obligated to the decommissioning plan,” answered Office of Mauna Kea Management director Stephanie Nagata. “So, if they should stop construction, as you mentioned, they are obligated to decommission.”