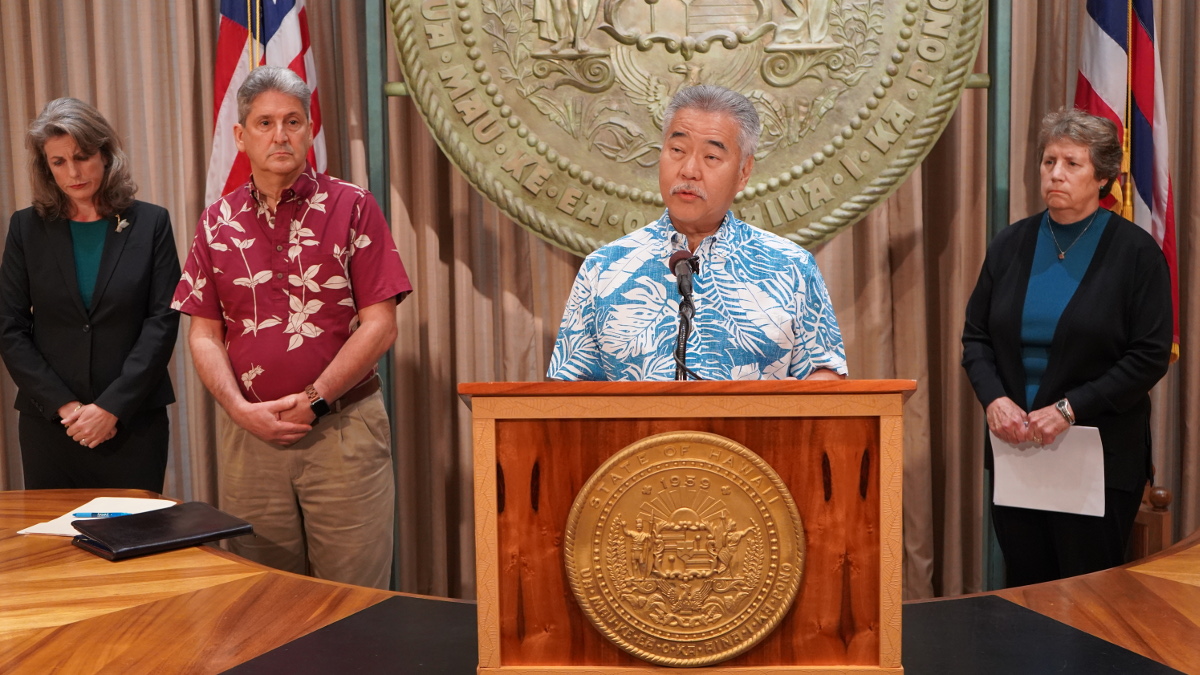 MAUNA KEA, Hawaiʻi - The state took action on Mauna Kea Thursday, and later held a press conference, after granting the Thirty Meter Telescope project a notice to proceed with the building of the observatory.

(BIVN) – The Hawaiʻi Department of Land and Natural Resources has issued a notice to proceed to the University of Hawaiʻi at Hilo for the Thirty Meter Telescope project on Mauna Kea. State officials announced today, after taking action on the mountain and arresting one individual, that the permit was issued after DLNR “confirmed the completion of the pre-construction conditions and mitigation measures required of the project in the Conservation District Use Permit, or CDUP.”

The state says the appropriate agencies will work with the TMT representatives to determine the start date.

In a pre-dawn action, law enforcement officers went to Mauna Kea on Thursday to take down four structures in three different areas on the mountain.

Dismantled were Hale Kukiaʻimauna – at the mid-level area – and two ʻahu on the northern plateau where TMT will be constructed, all erected by opponents of the project during the 2015 stand-off on the mountain. Also taken down: the Hale Kūhiō building on the lower elevation Hawaiian Home Lands.

So that construction of the telescope can begin safely, four unauthorized structures were removed from Mauna Kea earlier this morning by multiple state agencies. The structures were on Department of Hawaiian Home Lands property on Maunakea Access Road near the Daniel K. Inouye Highway intersection, on Department of Land and Natural Resources property near the mid-level facilities on Maunakea Access Road at the 9,000-foot elevation and on the TMT site on the summit of the mountain.

Kahoʻohaki Kanuha, arrested previously on Mauna Kea during the 2015 activity, was taken into custody again this morning.

Kanuha, who was at the summit area, suspected police were going to dismantle the ʻahu on the TMT site, and says he was trying to video record the law enforcement activity and was told to leave.

He was interviewed outside the Hilo police station upon his release. (Video is uploading now.)

The state says “the Hawaiʻi Supreme Court ruled that the two ʻahu on the TMT site did not constitute a traditional or customary right or practice, and they were removed with guidance from Native Hawaiian cultural advisors.”

Henry Yang, Chair, TMT International Observatory Board of Governors, issued the following statement in response to the news:

“TMT is pleased and grateful that the notice to proceed has been issued by the Department of Land and Natural Resources to the University of Hawaii. We remain committed to being good stewards of Maunakea, and to honoring and respecting the culture and traditions of Hawaii. It has been a long process to get to this point. We are deeply grateful to our many friends and community supporters for their advice and for their encouragement and support of the TMT project over the years.”

The state DLNR posted the Notice To Proceed document online, which gives more information on how the permit was obtained.

Based upon our review of the information you provided, the TMT project has met the preconstruction requirements contained in the CDUP and associated management plan. The Department thus issues TMT a Notice to Proceed.

Hawaiʻi County Councilman Matt Kanealiʻi-Kleinfelder has made a request for a report from the County administration regarding the extent of county agency activity on Mauna Kea.

Due to the tremendous amount of calls and contacts made to our office by the community regarding today’s activities on Mauna Kea, we are requesting a report from County Administration regarding the extent of County Agency activity on Mauna Kea. Request for report to include the extent of involvement by County Police Department, Corp Counsel and County Administration. We are requesting for this report to be reviewed at the upcoming committee meeting on July 8, 2019

In a later media release, the officials were quoted:

“We will proceed in a way that respects the people, place and culture that make Hawaiʻi unique. I will continue to work with the University of Hawaiʻi and all our partners to make meaningful changes that further contribute to the co-existence of culture and science on Mauna Kea.”

Suzanne Case, Chair, Board of Land and Natural Resources

“My staff and I have carefully reviewed the TMT project plans to ensure they are aligned with the permit approved by the board and upheld by the Hawaiʻi Supreme Court. The project has met all pre-construction requirements under the Conservation District Use Permit. As this project moves forward, I ask everyone who goes to Mauna Kea to respect this unique place and its fragile natural and cultural resources.”

“The notice to proceed with construction gives project managers, workers and others from our community authorization to begin work on the telescope. They will need safe access to the work site and safe conditions under which to work. The state will work to ensure their safety as well as the right of individuals to engage in speech about the project.”

“This notice to proceed is an important milestone in what has been a decade-long public and consultative process through which every requirement in statute, policy and procedure has now been met. We firmly believe in the benefits of the most advanced telescope in the world on the most magnificent and awe-inspiring mountain in the world. We also accept the increased responsibilities for the stewardship of Maunakea, including the requirement that as this very last site is developed for astronomy on the mauna, five current telescopes will be decommissioned and their sites restored.”

The media is being asked to direct questions to a dedicated media phone line and email account, since multiple state entities are involved.