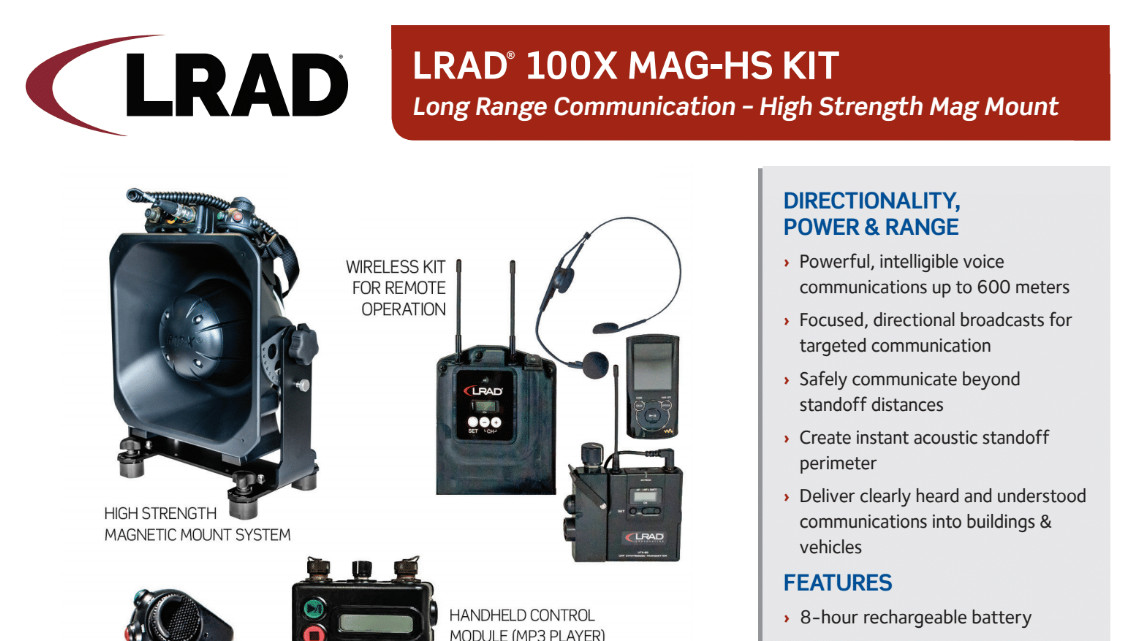 ACLU Threatens Lawsuit Over Possible LRAD Use On Mauna Kea

(BIVN) – With construction on the Thirty Meter Telescope set to begin on July 15, opponents of the project continue to express concerns over the state’s recent acquisition of a Long Range Acoustic Device, or LRAD. And now the non-profit American Civil Liberties Union has gotten involved.

On July 9, the ACLU Foundation Hawaiʻi sent a demand letter to state officials calling on the Department of Land and Natural Resources to “reassure the people of Hawaiʻi that it will not deploy LRAD for any anti-protest or crowd control purposes, including specifically in connection with the likely protests around the TMT on Mauna Kea.”

“But if for some reason DLNR cannot make this public commitment,” the staff attorney Wookie Kim stated in the letter, “the ACLU of Hawaiʻi stands ready to respond appropriately — as it has done before — in defense of people’s First Amendment rights. We note that courts are squarely on our side.”

An internal request from the DLNR Division of Conservation and Resources Enforcement to DLNR chair Suzanne Case to purchase the “one (1) man portable long-range, battery powered, public address system device” was made in March 2019. The justification:

The volcanic eruption of Kīlauea Volcano and the high number of Hurricane activity experienced by the State of Hawaiʻi in 2018 caused the Division of Conservation and Resources Enforcement to conduct public safety operations. These operations have shown the need for equipment capable of providing warning to the public in remote and rural areas. These types of operations also include the need for equipment to respond to and provide the means for public address and warning in other situations such as tsunami inundation zone evacuation and response to high Surf and coastal flooding episodes and support of the Department’s wildland fire responses.

Contrary to the written justification for the purchase, the ACLU contends in its letter of demand that “LRAD is a device created and intended for military use” and goes on to detail how “law enforcement first unleashed the device on peaceful protesters at the G20 summit held in Pittsburgh in 2009, causing pain and permanent hearing loss to both protesters and bystanders alike,” and how the device was used in similar crowd control situations including Standing Rock.

“There’s a lot of misinformation about that equipment,” Governor David Ige said during a news conference on Wednesday. “Its standard equipment that we have. We use it in emergency response situations where we expect to be able to communicate with many people over some distance.”

“Certainly if we have a need to communicate, if there is a large group of people and we believe that this broadcast device would help us, we plan to use it,” Governor Ige said.

When a reporter asked about the use of LRAD in a standard use of force policy, Attorney General Clare Connors answered, “LRAD is not intended to be used for that purpose. I don’t believe it’s covered in the use of force policy, so it’s going to be utilized as the governor identified; for the public address capacity to ensure communication.”

The ACLU letter, the text of which is published below (without the citations found in the original), provided links to resources on the LRAD, which included this video:

The ACLU of Hawaiʻi Foundation (“ACLU of Hawaiʻi”) has learned that the State of Hawai‘i Department of Land and Natural Resources (“DLNR”) Division of Conservation and Resources Enforcement (“DOCARE”) recently purchased a long-range acoustic device (“LRAD”), a military-oriented weapon commonly known as a “sound gun” or “sound cannon.” Specifically, procurement records show DOCARE bought an LRAD 100X MAG-HS system (“LRAD 100X”) from LRAD Corporation. We previously wrote to you to request a meeting to discuss our concerns about DLNR’s acquisition of the LRAD 100X. We instead received the attached July 1, 2019 letter from Chairperson Case, which referred to peaceful protestors as “nonviolent noncombatants,” and maintained that the LRAD was “not listed in DLNR’s use of force continuum,” while also claiming that it was a “legitimate useful tool for law enforcement in appropriate situations in compliance with law and standard use of force policy.” This letter raised more questions than it answered.

We write now in response to Chairperson Case’s July 1, 2019 letter to express our concerns about DLNR’s acquisition of the LRAD 100X, and to demand that DLNR and DOCARE publicly commit to not deploying LRAD for any anti-protest or crowd control purposes, including in connection with the likely protests around the Thirty Meter Telescope (“TMT”) on Mauna Kea. Given the uncertainty around the timeline for TMT’s construction—and the timing and scope of related protests—we ask that you respond in writing making such commitment by July 19, 2019.

At the outset, LRAD is a device created and intended for military use. In fact, LRAD was explicitly developed as a sound weapon “in response to the deadly October 2000 terrorist attack on the U.S.S. Cole.” That the precise LRAD 100X model purchased by DLNR is frequently sold in large quantities for use by military operations further confirms LRAD’s military origins. While some descriptions of LRAD — including DLNR’s —frame it as an innocuous “communications” device, LRAD Corporation’s own marketing statements reveal the truth: LRAD is a “high-intensity directional acoustic hailer” designed for use by “military personnel” “in the harshest military conditions” and “allow[ing] for near instantaneous escalation across the force protection spectrum.” In sum, LRAD is an acoustic weapon used to force compliance by causing pain.

Indeed, LRAD has devastating effects on people. The LRAD technology concentrates and directs acoustic energy (that is, sound) in a narrow beam at a target, making for an incredibly loud, powerful, and painful sound. As one victim of LRAD explains, “Your brain feels like it’s vibrating in a bowl of jelly on the table.” The LRAD 100X, in particular, has a maximum output of 140dB, which is equal to the sound of a gunshot or firecracker, and to which “any exposure . . . causes immediate damage (and causes actual pain).” Unsurprisingly, as Amnesty International has warned, when “[u]sed at close range, loud volume and/or excessive lengths of time, LRADs can pose [] serious health risks which range from temporary pain, loss of balance and eardrum rupture, to permanent hearing damage.” For this reason, DLNR’s observation that “the 100X is the smallest [LRAD] system offered”13 is beside the point when even “the smallest” device can cause so much harm.

We also know how LRAD technology has been abused in connection with civilian protests and other First Amendment-protected activity. Law enforcement first unleashed the device on peaceful protesters at the G20 summit held in Pittsburgh in 2009, causing pain and permanent hearing loss to both protesters and bystanders alike. Then it was deployed at Occupy Wall Street in 2011. And then Ferguson, Missouri in 2014. And once again, at Standing Rock.

In light of the above, the ACLU of Hawaiʻi has various concerns about DLNR’s purchase of an LRAD. As an initial matter, it is unclear why DLNR—whose mission is to “[e]nhance, protect, conserve and manage Hawaii’s unique and limited natural, cultural and historic resources” — has any need for a military-oriented sound gun. A weapon like the LRAD does not belong in DLNR’s arsenal in the first instance.

The ACLU of Hawaiʻi is particularly concerned about how DLNR’s possession of an LRAD device will impact the likely protests relating to the construction of the TMT. The direct physical and psychological harms that any deployment of the LRAD by DLNR would have on protesters is obvious—and such deployment would constitute excessive force in violation of the Fourteenth Amendment. But in addition — and perhaps even more concerning — is the chilling effect that DLNR’s possession of an LRAD has on people’s desire and ability to exercise their First Amendment rights in the first place. In other words, regardless of whether DLNR actually uses LRAD at Mauna Kea, many people very likely will be too afraid to exercise their rights to assemble and protest at all, lest they suffer the same kinds of harms that past LRAD victims have suffered. Worse, this chilling effect deters not only protesters, but also journalists, observers, and other bystanders, further showing the indiscriminate, overbroad influence of LRAD.

Those concerns are amplified by the fact that it is unclear whether and how LRAD falls on DLNR’s use-of-force continuum. DLNR has made directly contradictory statements on this issue. On the one hand, DLNR claims its LRAD 100X “is not a weapon and is not listed in DOCARE’s use of force continuum.” But in the same letter, DLNR claims its LRAD 100X “is a legitimate useful tool for law enforcement in appropriate situations in compliance with law and standard use of force policy.” This lack of clarity suggests that DLNR itself does not know the situations in which it will use LRAD, and whether and how any use will be constrained to avoid needless and excessive harm. This is alarming. Until DLNR has clear policies and guidelines around LRAD use, DLNR should not use an LRAD.

For all these reasons, the ACLU of Hawaiʻi now calls on the DLNR to reassure the people of Hawaiʻi that it will not deploy LRAD for any anti-protest or crowd control purposes, including specifically in connection with the likely protests around the TMT on Mauna Kea.

This commitment should be easy for DLNR and DOCARE to make. The entire “justification” DOCARE provided to Chairperson Case for the purchase of its LRAD 100X is natural disasters. Indeed, as DOCARE’s request for approval stated, “The volcanic eruption of Kilauea Volcano and the high number of Hurricane activity experienced by the State of Hawaii in 2018 . . . show[ed] the need for equipment capable of providing warning to the public in remote and rural areas.” The “other situations” used to justify the purchase of the LRAD 100X are: “tsunami inundation zone evacuation,” “response to High Surf and coastal flooding episodes,” and “support of the [DLNR]’s wildland fire responses.” Given that DOCARE purchased its LRAD for natural disaster warnings, it should have no difficulty abstaining from using that device for anti-protest or crowd control purposes—purposes on which DOCARE did not rely in seeking an appropriation.

But if for some reason DLNR cannot make this public commitment, the ACLU of Hawaiʻi stands ready to respond appropriately — as it has done before — in defense of people’s First Amendment rights. We note that courts are squarely on our side. Two lawsuits challenging law enforcement use of LRAD resulted in resounding victories for First Amendment rights. Piper v. City of Pittsburgh — involving a professor who suffered permanent hearing loss while attending the 2009 G20 Summit—ended in a settlement in which Pittsburgh both paid monetary damages and implemented a new policy limiting LRAD use. And in a 2018 opinion in Edrei v. Maguire — involving half a dozen activists and journalists at a 2014 New York City protest — the United States Court of Appeals for the Second Circuit “h[e]ld that purposefully using a LRAD in a manner capable of causing serious injury to move non-violent protesters” constitutes “excessive force” and “violates the Fourteenth Amendment under clearly established law.” We hope DLNR heeds the guidance these two suits provide.

While LRAD might legitimately be used during natural disasters, it simply has no place at protests and mass gatherings. Used in that way, LRAD is dangerous not only to the human body, but also to people’s rights to free speech and assembly—and to democracy itself. The G20 Summit, Occupy Wall Street, Ferguson, and Standing Rock were enough. Mauna Kea should not be next.

We look forward to hearing from DLNR and DOCARE. If you have any questions or comments, please contact me at 808-522-5905 or wkim@acluhawaii.org.