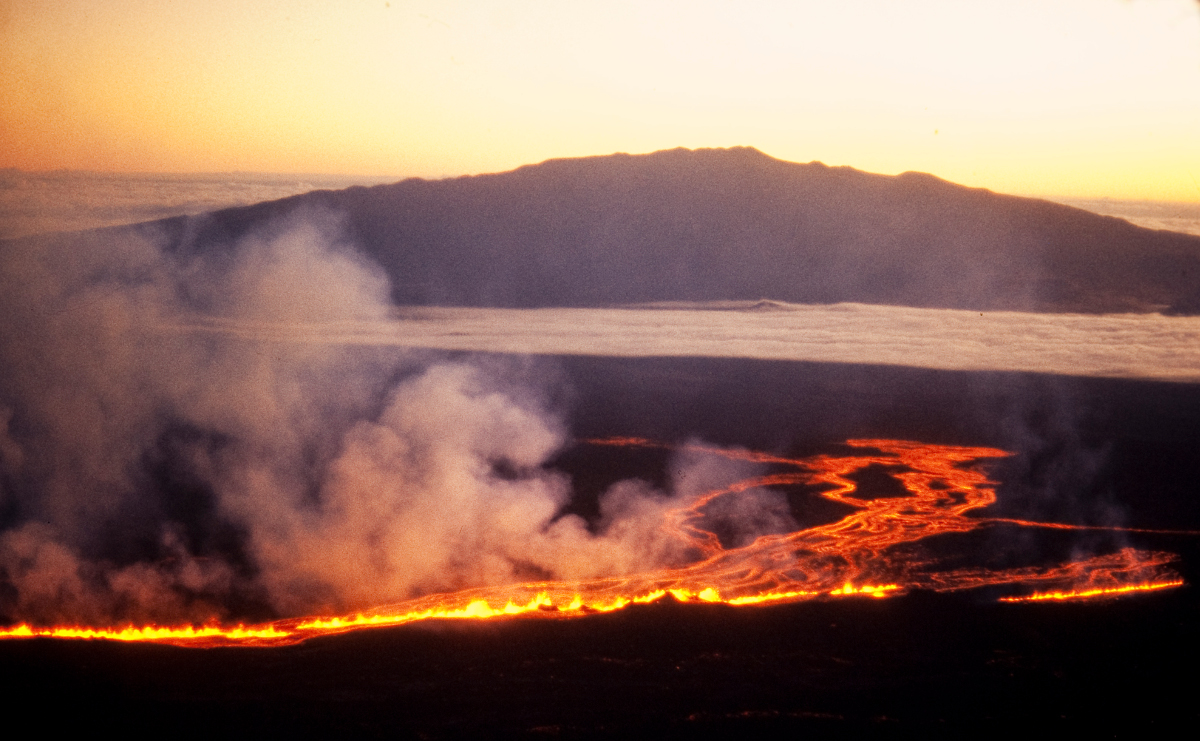 As the sun rose above Mauna Kea (background) on July 6, 1975, eruptive fissures along the Northeast Rift Zone of Mauna Loa fed voluminous ‘a‘ā lava flows that quickly moved down the north flank of the volcano. USGS photo by D. Peterson.

HAWAIʻI ISLAND - The 1975 eruption lasted less than one day, but the build up to the event took much longer, in the days before the USGS Alert-Notification System existed.

(BIVN) – The USGS Volcano Alert level for Mauna Loa was changed on July 2, 2019, to ADVISORY as earthquake and ground deformation rates at the volcano have exceeded long-term background levels for the past several months.

The USGS Alert-Notification System for Volcanic Activity was established in 2006, long after the most recent eruption of Mauna Loa in 1984.

In the latest Volcano Watch, the weekly article written by U.S. Geological Survey Hawaiian Volcano Observatory and affiliates, scientists take a look back at how the Alert-Notification System may have been categorized the activity at Mauna Loa leading up to the short-lived eruption of 1975.

Shortly before midnight on July 5, 1975, Mauna Loa Volcano awakened with a shudder. Quickly responding to a seismic earthquake/tremor alarm at 11:18 p.m., USGS Hawaiian Volcano Observatory (HVO) staff rushed to their offices, where, at 11:42 p.m., they noted red glow above the mountain. The 1975 eruption lasted less than a day, but it ended Mauna Loa’s then longest-known repose period.

The post-World War II years had brought gradual improvements to HVO’s volcano monitoring network, including a seismic station at the rim of Moku‘āweoweo, Mauna Loa’s summit caldera. This station was the first to radio its signal from the summit area to HVO for review.

For many years, HVO’s seismic monitoring began with the scan of seismograms to compile daily counts of earthquakes in key regions of the volcanoes. For sufficiently well-recorded earthquakes, locations—or hypocenters—were also computed, as they are now, to help describe the earthquake and volcanic processes in greater detail.

In April 1974, more than a year before the 1975 eruption, HVO staff noted a clear increase in the daily earthquake counts beneath Mauna Loa. An initial flurry of earthquakes extended into mid-May, when earthquake counts dropped, but still persisted above the April daily averages.

Complementing the 1974 and 1975 earthquake counts, the hypocenters showed that Mauna Loa earthquakes were generally clustered beneath Moku‘āweoweo, the volcano’s Southwest Rift Zone, and 5-6 km (3-4 mi) west of the summit. The western group was somewhat deeper than the two other clusters.

Though lacking in the detail and precision available to us now, HVO’s observations in August 1974 would have likely resulted in an upgrade of Mauna Loa’s Volcano Alert Level and Aviation Color Code to Advisory and Yellow, respectively—had the USGS Alert-Notification System for Volcanic Activity existed at that time (the system was established in 2006; more info). Persistent, though fluctuating, rates of hundreds of earthquakes each week would arguably have sustained an upgraded classification through the fall of 1974.

As early as 1915, HVO scientists had postulated relationships between Mauna Loa eruptions and moderately strong, possibly precursory, flank earthquakes. On November 30, 1974, such an earthquake, magnitude-5.4, occurred in the Ka‘ōiki fault system beneath Mauna Loa’s southeast flank.

That earthquake alone might not have warranted elevating Mauna Loa’s Volcano Alert Level and Aviation Color Code from Advisory/Yellow to Watch/Orange, but, over three days in early December 1974, earthquake counts jumped from 100-200 to over 1,000 per day.

On December 15, a shallow magnitude-4.6 earthquake occurred beneath Moku‘āweoweo and daily earthquake counts peaked at 1 per minute (1491 per day). The size and location of the M4.6 earthquake and the extremely high counts might well have encouraged raising Mauna Loa’s status to a Watch/Orange designation.

A second shallow magnitude-4 earthquake struck beneath Mauna Loa’s southeast summit region on March 26, 1975. Thereafter, an apparently accelerating rate of shallow magnitude-3+ earthquakes beneath the summit would have provided additional basis to change the Volcano Alert Level and Aviation Color Code prior to the eventual eruption in July.

In late spring 1975, HVO staff members Bob Koyanagi, Elliott Endo, and Jennifer Ebisu (Nakata) circulated a paper that described their observations and announced Mauna Loa’s reawakening. In their world, without Internet and USGS Volcano Activity Notices, among many other differences compared to now, their paper appeared in print in September 1975, after the eruption.

Modern monitoring strategies have improved HVO’s ability to recognize and act upon clear precursors leading to Mauna Loa’s next eruption. We understand however, that while building toward its next eruption, the volcano will not necessarily follow the same patterns noted in connection with earlier eruptions.

HVO continues to carefully track volcanic and seismic activity on Mauna Loa, Kīlauea, and other active Hawaiian volcanoes, and will issue appropriate notifications based on the best information available to us. Sign up through the USGS Volcano Notification Service to receive these email notices.