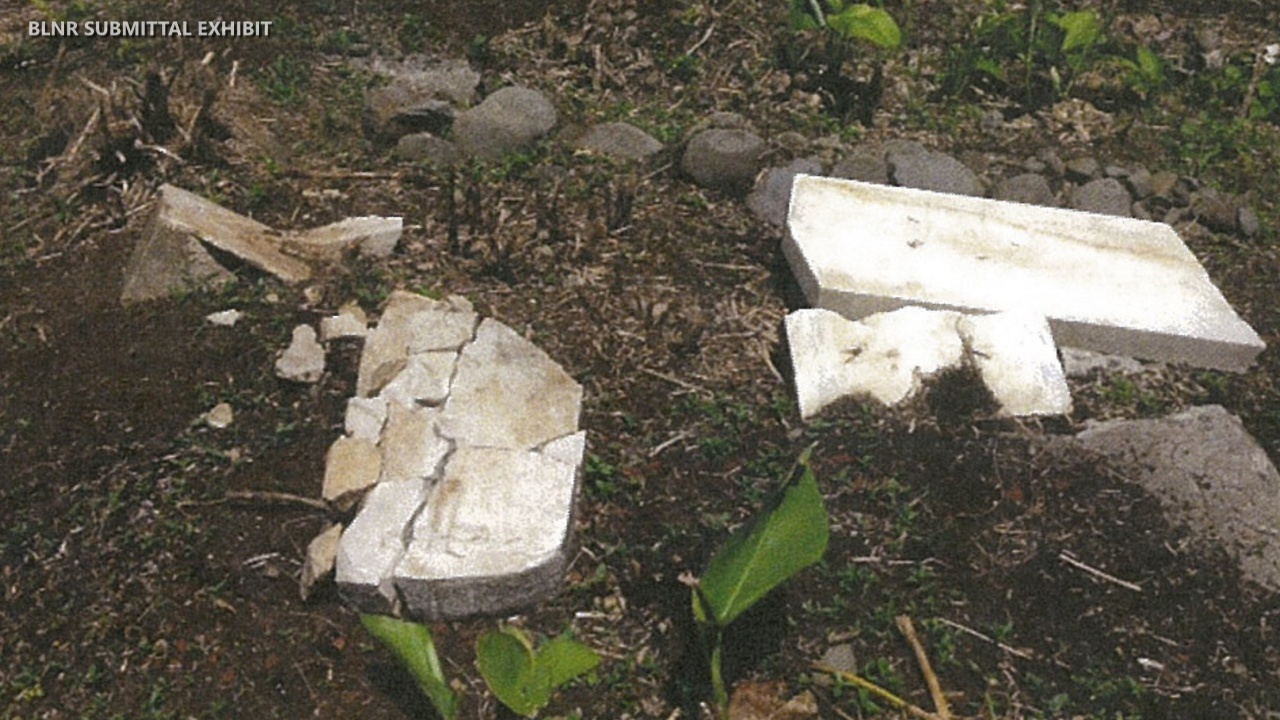 Exhibit from the DLNR Enforcement Action submittal to the land board.

Land Board To Vote On Puʻuʻeo Cemetery Damage Fine

HONOLULU, Hawaiʻi - The BLNR will consider a settlement of enforcement action against the Edwin C. Olson Trust No.2 for damage that occurred during land altering activities without a permit in 2016.

(BIVN) – A Hawaiʻi Island land developer faces a possible $35,000 fine for damage to the “gravestones, crypt, and to the Amauʻulu Camp Cemetery as a whole”, according to the agenda for the July 26 meeting of the Hawaiʻi Board of Land and Natural Resources.

The state accused the Trust of altering historic properties without a County-approved grading and grubbing permit back in 2016. A state archaeologist “observed clear evidence that heavy equipment had been in the cemetery and that several headstones, including a crypt, had been damaged.”

The settlement comes as the Olson Trust plans to develop 51 total lots on the two parcels in the area of Puʻuʻeo, totaling roughly 40-acres of land. 49 of those lots will be habitable (30 residential and 19 agricultural lots). One of the remaining 2 lots (1.7-acres) will expand Clem Akina Park, and the other (2.11-acres) will be set aside in order to preserve a historic era cemetery.

The Trust needs a State Land Use Boundary Amendment and a Change Of Zone in order to enable the project to go forward. The Windward Planning Commission voted to forward a favorable recommendation for both requests to the Hawaiʻi County Council.

On June 18, the Council Planning Committee postponed a vote on the two bills. The council wanted to get more information from the State Historic Preservation Division, or SHPD, before advancing the bills. But until now, the SHPD matter seemed to be in limbo.

In his BLNR submittal, SHPD Administrator Alan Downer explained how the $35,000 settlement figure was derived:

The damage to the gravestones, crypt, and to the Arnauulu Camp Cemetery as a whole was promptly reported to SHPD by the Trust’s representatives. The Trust also promptly reported the second incident involving damage to a grave marker, which appears to be located outside the boundaries of the cemetery. Had the Trust not self-reported these matters, it is quite possible that SHPD would not have learned of this. After the Trust reported, it cooperated fully and completely with the SHPD and DOCARE investigation.

The SHPD regards the prompt self-reporting and full cooperation with the investigation as mitigating factors. In light of these mitigating factors, it seems reasonable to accept less than the maximum assessment for each alleged violation.

While the proposed settlement amount of $35,000 is lower than the assessment originally recommended by SHPD, it is both a reasonable and substantial assessment.

Meanwhile, Hawaiʻi County Council Bills 83 and 84 pertaining to the Olson Trust development will be back on the agenda Tuesday, July 23, as the Committee on Planning meets at the West Hawaiʻi Civic Center at 1 p.m.