MAUNA KEA, Hawaiʻi - On the scene with Pua Case, and on the media teleconference call with a spokesperson for the Hawaiʻi Department of Land and Natural Resources.

(BIVN) – Today is day 8, or one week, since the scheduled start of construction of the Thirty Meter Telescope on Mauna Kea. Law enforcement has been unable to clear a safe path through the kiaʻi who stand in opposition to TMT on the closed Mauna Kea Access Road.

This weekend’s mass gathering at the base of Mauna Kea drew an estimated 2,000 to 2,500 people. The crowd subsided on Monday, although an estimated 1,000+ remain at the site where the opposition to the Thirty Meter Telescope is holding space.

During a 11 a.m. media teleconference, Dan Dennison, the Senior Communications Manager with the Hawaiʻi Department of Land & Natural Resources, repeated that “law enforcement unified command continues to plan and prepare today. As has been stated before, for operational security reasons, law enforcement cannot discuss specifics.”

The state said there have been no arrests nor any reported injuries during the past 24 hours.

The atmosphere at the encampment was cold and rainy on Monday morning. Pua Case, a leader in Ku Kiaʻi Mauna movement, told us that severe weather was a concern overnight.

“We were really expecting thunder, lightning, and perhaps some snow on the Mauna,” Case said, “which wouldn’t surprise us because we’ve been calling on Poliʻahu and the Wao Akua all this time.”

“Last night, the storm didn’t arrive here,” Case added, “but we did have people go home that needed to because we didn’t want them to be here in that kind of weather.”

State officials say that in case of lightning, “take shelter in a vehicle, not in a tent,” adding that there is a slight chance of thunderstorms with lightning later Monday afternoon. 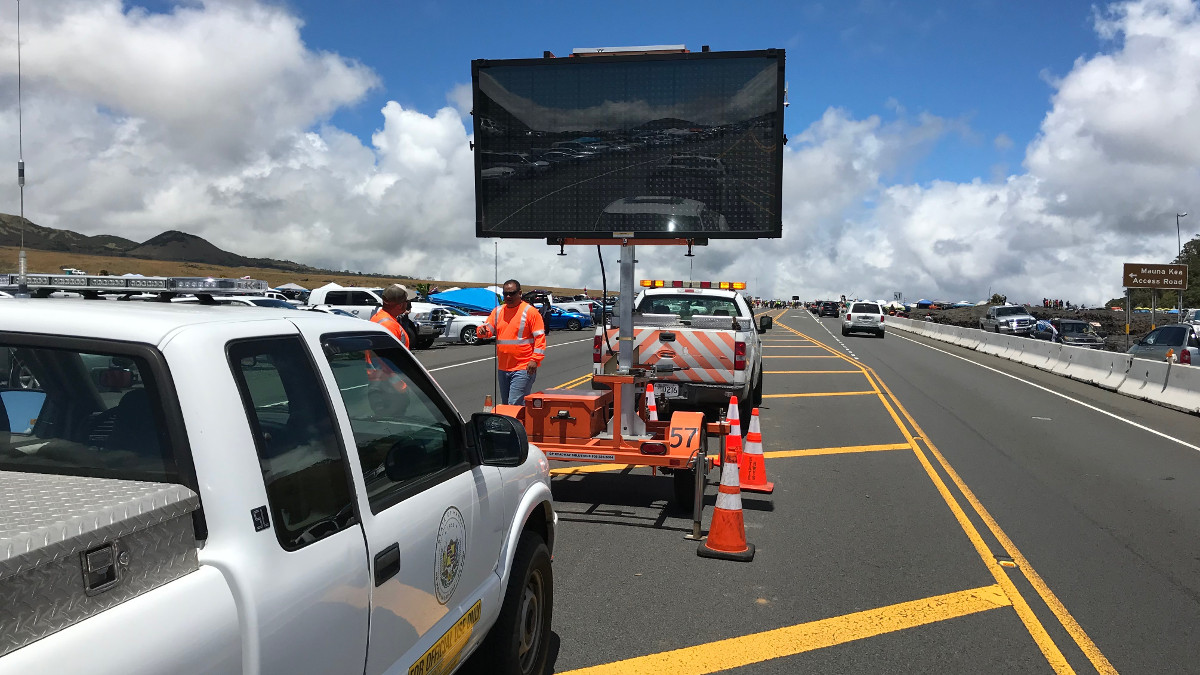 Department of Transportation On DKI Highway

The Hawaiʻi DOT “continues to urge all motorists to exercise caution as they approach the intersection of Mauna Kea Access Road and the Daniel K. Inouye Highway (formerly Saddle Road) due to the increased activity.” The department provided this information:

In the past week, HDOT has placed electronic message boards in both directions asking motorists on DKI Highway to reduce their speed for safety. DKI Highway in the vicinity of Mauna Kea Access Road is a high-speed facility, with a speed limit of 60 mph as of February 2017.

Additionally, traffic cones were placed at the intersection to make motorists aware of the increased pedestrian activity and barriers were installed on the sides of the highway to protect pedestrians and law enforcement at the base of Mauna Kea Access Road.

Motorists using DKI Highway to travel between east and west Hawaii are reminded to slow down considerably and be prepared to stop for pedestrians in the roadway. Pedestrians are reminded that the DKI Highway is a high-speed facility, and that crossing the facility should be done only if absolutely necessary and with extreme caution.

Today the state offered more context to Governor David Ige’s allegation that drug and alcohol use was observed at the Puʻuhouna o Puʻu Huluhulu. It was a statement that earned immediate rebuke from TMT opponents, and those who have been helping to manage the sanctuary on the Saddle Road called the statement an outright lie.

On Monday, the state said:

Law enforcement officers last week reported witnessing alcohol and marijuana use in the protest area, which was the basis of the governor’s statement Friday regarding the illegal activity. When informed by officers, protest leaders said they would patrol the area and ask violators to leave. Those efforts were successful as officers say there is no longer evidence of alcohol and marijuana use. 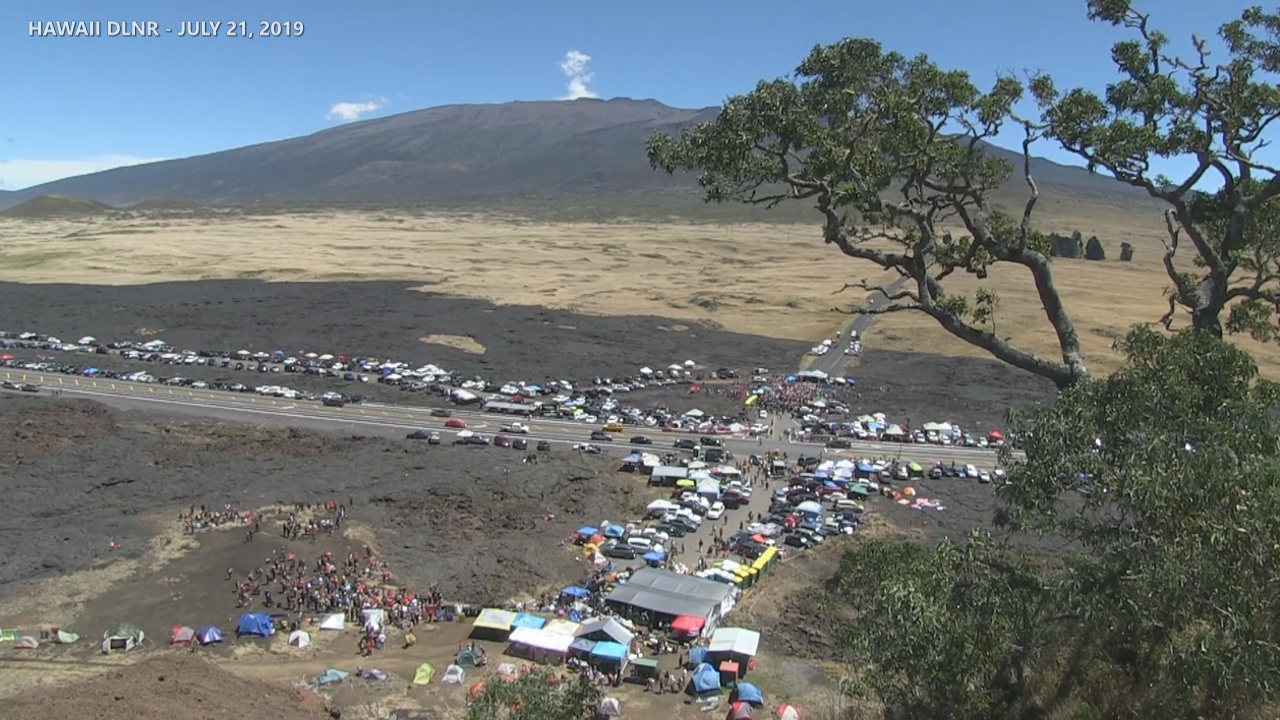 view from the top of the puʻu courtesy Hawaiʻi DLNR

In a Facebook message posted yesterday, the Puʻuhonua o Puʻuhuluhulu Maunakea page said that due to the weather, “hiking on the puʻu is closed until further notice,” while the pu‘uhonua down below remained open.

The DLNR spokesperson also provided this information on the puʻu:

Many people are climbing the pu’u across the road at Pu’uhuluhulu. This area is under the jurisdiction of the Dept. of Hawaiian Home Lands (DHHL) and the DLNR Division of Forestry and Wildlife. Anyone walking up the pu’u is ask to follow sanitation procedures to prevent the spread of Rapid Ohia Death. Additionally, DHHL and DLNR/DOFAW ask that everyone stay on established trails, do not remove plants, and practice good stewardship of the aina. 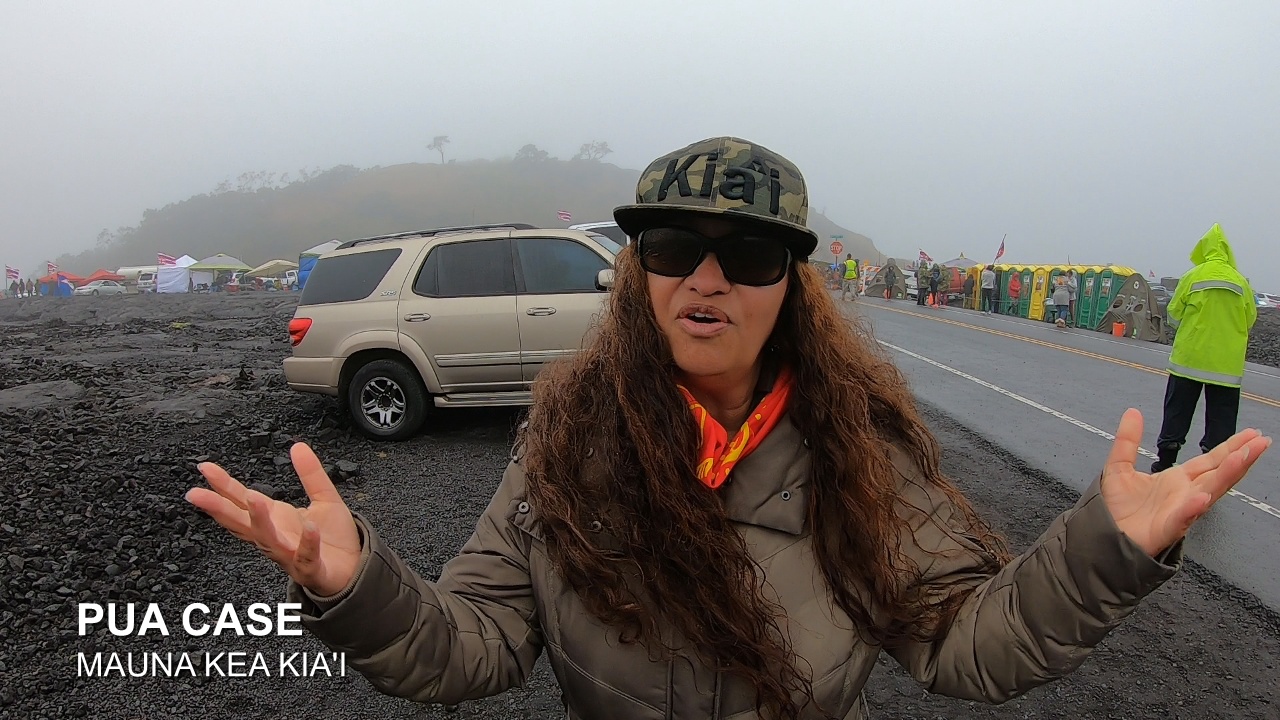 Pua Case at the base of the Mauna Kea Access Road

“We are calling all of our people back home,” Pua Case said, standing this morning on the Mauna Kea Access Road, as Lt. Governor Josh Green met with kupuna. “I really want to make it clear that although we said to people to go home last night, to be safe and protected, every day we make a call out to our people here in Hawaiʻi – from the Pae ʻĀina – to please come and join us. Our numbers is our safety.”

Case said they “are not making a call-out to the larger communities or the continents of the world, but we do find – of course – that there are people here that have found their way here and that’s maikaʻi. But the reason for not making a call out beyond Hawaiʻi is because, for right now, we are expanding. We started with 30 people and we must be up to 2,500 or so on a given day. So we, as the organizers and those who are here all the time, we’re constantly making adjustments and improvement so that we can welcome everyone.”