(BIVN) – On Tuesday, Kahoʻokahi Kanuha – one of the leaders of the opposition to the Thirty meter Telescope – held a news conference on Mauna Kea, where he addressed to topics.

The first was the apparent transfer of responsibility for the effort to ensure safe passage of the TMT construction equipment up the mountain from Governor David Ige to Mayor Harry Kim.

Today, I am asking Hawaiʻi County Mayor Harry Kim to coordinate both county and state efforts to peacefully attempt to reach common ground with the protectors of Maunakea and the broader community. Mayor Kim is closest to the situation and the impacts are greatest on the island he leads.

We both share the goal of achieving a resolution that is peaceful and satisfactory to as many as possible in the community. I support the vision he has widely articulated for Maunakea as a beacon of hope and discovery for the world that brings us together rather than divides us. And we both understand that the issues underlying what is taking place today are far deeper than TMT or Maunakea. They are about righting the wrongs done to the Hawaiian people going back more than a century.

While Mayor Kim will be taking the lead, hard decisions will need to be jointly supported by the state and county and we will be working together to determine next steps that are in the best interests of all the people of Hawaiʻi.

Kanuha told the news media that “we want to acknowledge that statement because, for the first time ever, he has acknowledged us as protectors. Protectors of Mauna Kea. In his statement he did not once acknowledge us or refer to us as protesters.”

“He also stated that he now realizes that the issue that we are facing here is simply not just about the Thirty Meter Telescope and the desecration of Mauna Kea. That is at the forefront of the issue but deep within this issue is the historical marginalization and disenfranchisement of Hawaiians, and our culture, and our rights as a people,” Kanuha said, “and he has stated in that statement that he is hopeful that we can work together to find a peaceful resolution and so we’re encouraged.”

Kanuha also said he is hopeful, “because Mayor Harry Kim, unlike the governor, has come to the Puʻuhonua o Puʻuhuluhulu himself. He’s been here three times. He has addressed the people. He lives in this community. He knows this community.”

The news conference was held before Governor David Ige visited the encampment for the first time early Tuesday evening. The governor received a warm welcome. 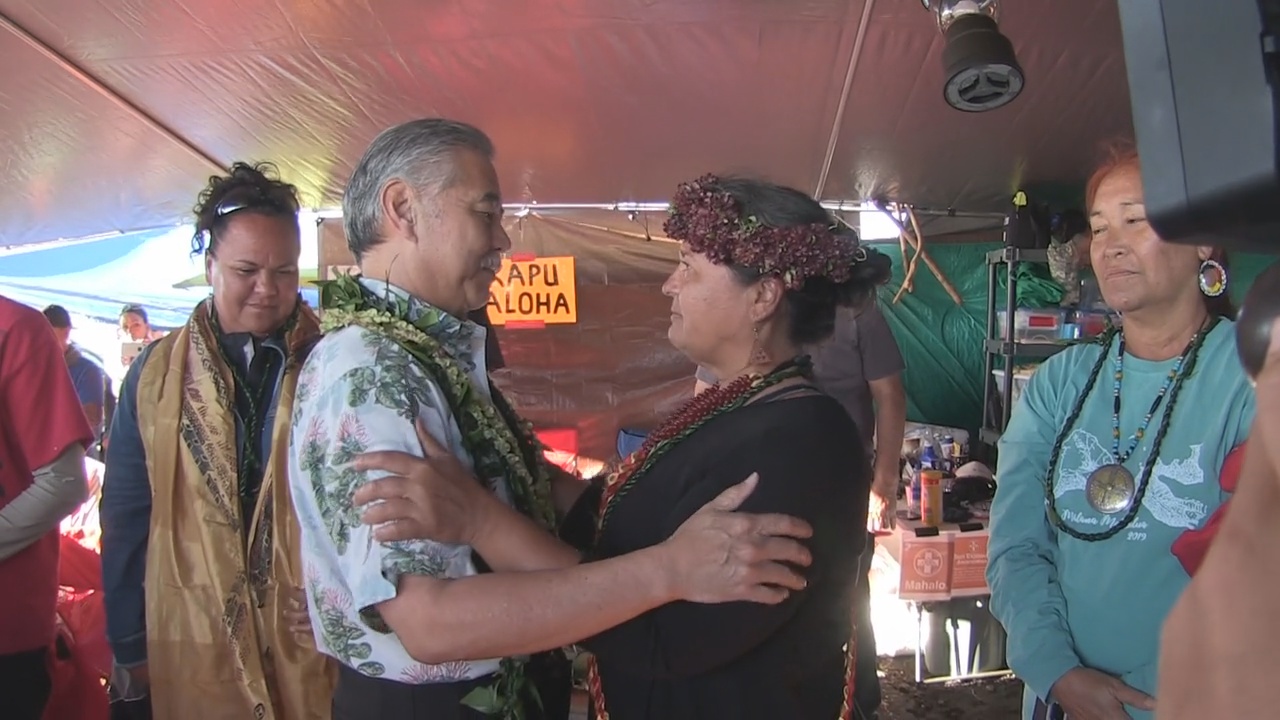 Kanuha also wanted to talk about the issue of access to the mountain.

“A week ago to this day – last week Tuesday – the Maunakea Observatory’s preemptively and voluntarily decided to move their operations off the Mauna,” Kanuha said. “We were working with the state as best as we could to allow their access to Mauna Kea. And I want to be very clear, up until this point, we have made concession after concession after concession in allowing different vehicles up the Mauna. Water trucks have gone up. Park rangers have gone up. Law enforcement has gone up. Food trucks for Halepohaku have gone up. Other employees for Halepohaku have gone up. The National Guard has gone up. Law enforcement is coming in and going out as they wish.”

“We simply asked for access of one vehicle, up the Mauna, for religious and cultural practices that are constitutionally protected,” Kanuha said. “That request was denied and it was expressed to us that it was absolutely non-negotiable. And so we are calling on the governor to make that concession. We have compromised over and over and over and over again.”

“We call upon the Mauna Kea observatories, as well,” Kanuha said, “to work with us because we do not wish to obstruct your access. But the narrative that has been pushed by the observatories and by those on Mauna Kea is that Hawaiians have to share the Mauna, right? And we’ve done that since 1968. But it becomes very very difficult to share the Mauna when one side is locked out. And so again we call upon the governor to accept our requests to allow us access.”

On Tuesday,  the state’s Joint Information Center reported that existing observatory technicians were prevented from passing through their checkpoint at about 8 a.m. today. Big Island Video News will have more on that incident in a follow-up story.

Later on Tuesday, the First Circuit Court ruled that Paul Neves, the kumu hula and member of the Royal Order of Kamehameha, must be allowed access to the summit of Mauna Kea to conduct his cultural practice. Neves sued the state over Governor David Ige’s emergency proclamation that closed down the mountain.