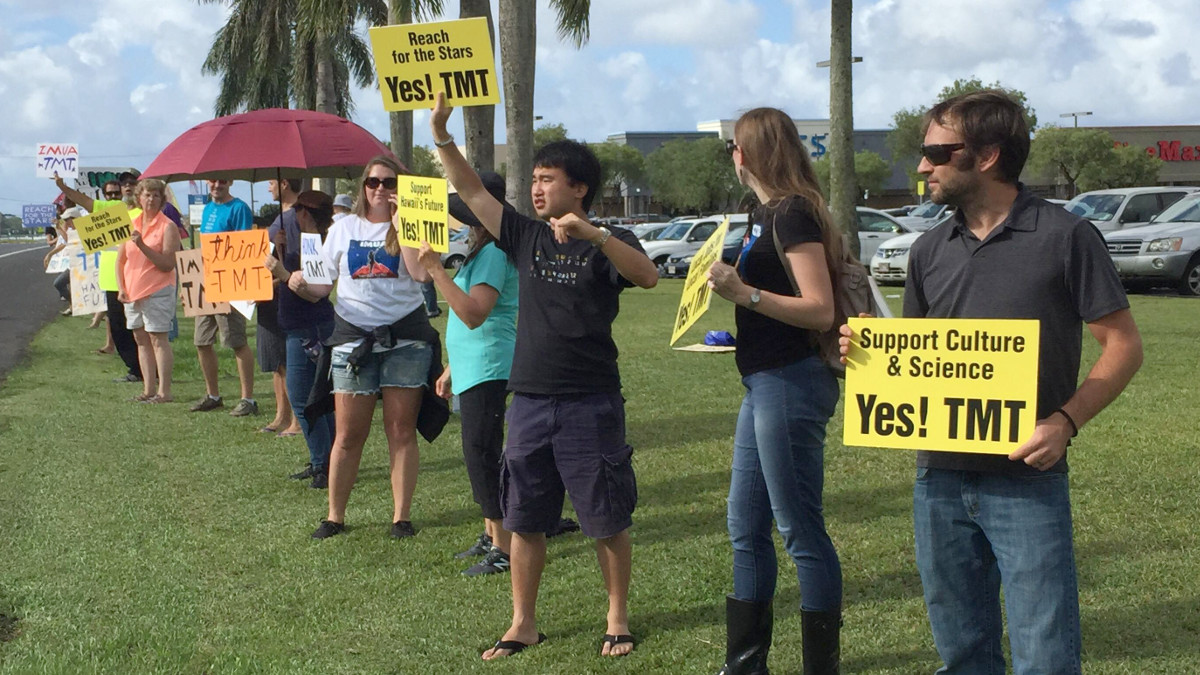 TMT Not Backing Down, Supporters Unwavering

(BIVN) - Although many have felt "silenced via social media", TMT supporters are still behind the project planned for the summit-area of Mauna Kea.

(BIVN) – With the start of construction on the Thirty Meter Telescope on Mauna Kea at a standstill, and talks between the TMT opponents who are blocking the road and government officials seemingly at an impasse, many are now petitioning the observatory to take action.

“There should be increasing political pressure on TMT,” said Nelson Ho during his testimony to the Hawaiʻi County Council on Wednesday.  “They are the lone decision-makers that could make a difference and not contribute to the violence. Governor Ige cannot do it. Mayor Kim cannot do it. The protectors cannot do it. Only the TMT board of directors can make the decision to walk away, and not have this catastrophic violence visit our island society.”

TMT supporters have responded by rallying behind the project. A sign waving in Hilo on Thursday drew roughly 100 people.

Laurie Chu, a Ph.D. candidate at the UH Mānoa Institute For Astronomy, said the event was organized in 24 hours.

“We took inspiration from the simultaneously organized Honolulu rally,” Chu said, “and it was the best way to take our stance and make our voices heard on the Big Island, and to encourage others to show their support. Some seemed so thrilled to have an outlet that they drove from as far as Waimea or Kailua-Kona, after hearing about it only hours before the event.”

“Many of us have felt silenced via social media,” Chu said, “afraid to speak up due to some threats and racism so this was a direct response that we have a voice too and that we care about the future Hawaii all of us will live in, as both native and non-native Hawaiians.”

Supporters have also been encouraging others to call key elected officials to ask them to stand behind the project.

Gordon Squires, vice president of external relations for TMT, told Hawaii News Now that, by chance, the regularly scheduled TMT International Observatory board meeting was held this week. The board reaffirmed that Mauna Kea is the preferred site, he said. The alternate site remains in La Palma, on the Canary Islands.

“The vast majority of folks in Hawaii are asking us to stay, we’re committed to do so,” he told Hawaii News Now. “It is urgent. Its important for us to get started as soon as possible.”

TMT also wrote about the situation on its website.

“I think it’s fair to say that what is happening today in Hawaii isn’t just about the construction of TMT on Maunakea,” wrote Christophe Dumas, TMT Observatory Scientist and Head of Operations, in an article published on the TMT website on July 23. “Among those who remain opposed to the project are many who see TMT as an icon for what they believe is the wrong side in the much larger political issue of Hawaiian sovereignty. We respect those who express opposition and understand the pain they feel. However, TMT is a bystander in that conversation, which has been going on for many years. And whether or not TMT is built in Hawaii will not bring closure to it.”

“Although it may not appear this way at the moment given what is being shared and seen in social media, the majority of Native Hawaiians actually support the construction of TMT on Maunakea: An independent poll conducted by the Honolulu Star-Advertiser in 2018 found that 72 percent of Native Hawaiians (registered voters) support TMT, 23 percent oppose it and 5% were undecided,” Dumas wrote. “Similarly, many Native Hawaiians and others believe that Maunakea is sacred and yet can still be home to astronomy. A statewide poll conducted in 2018 found that 88 percent of Hawaii residents agree there should be a way for science and Hawaiian culture to co-exist on Maunakea.”