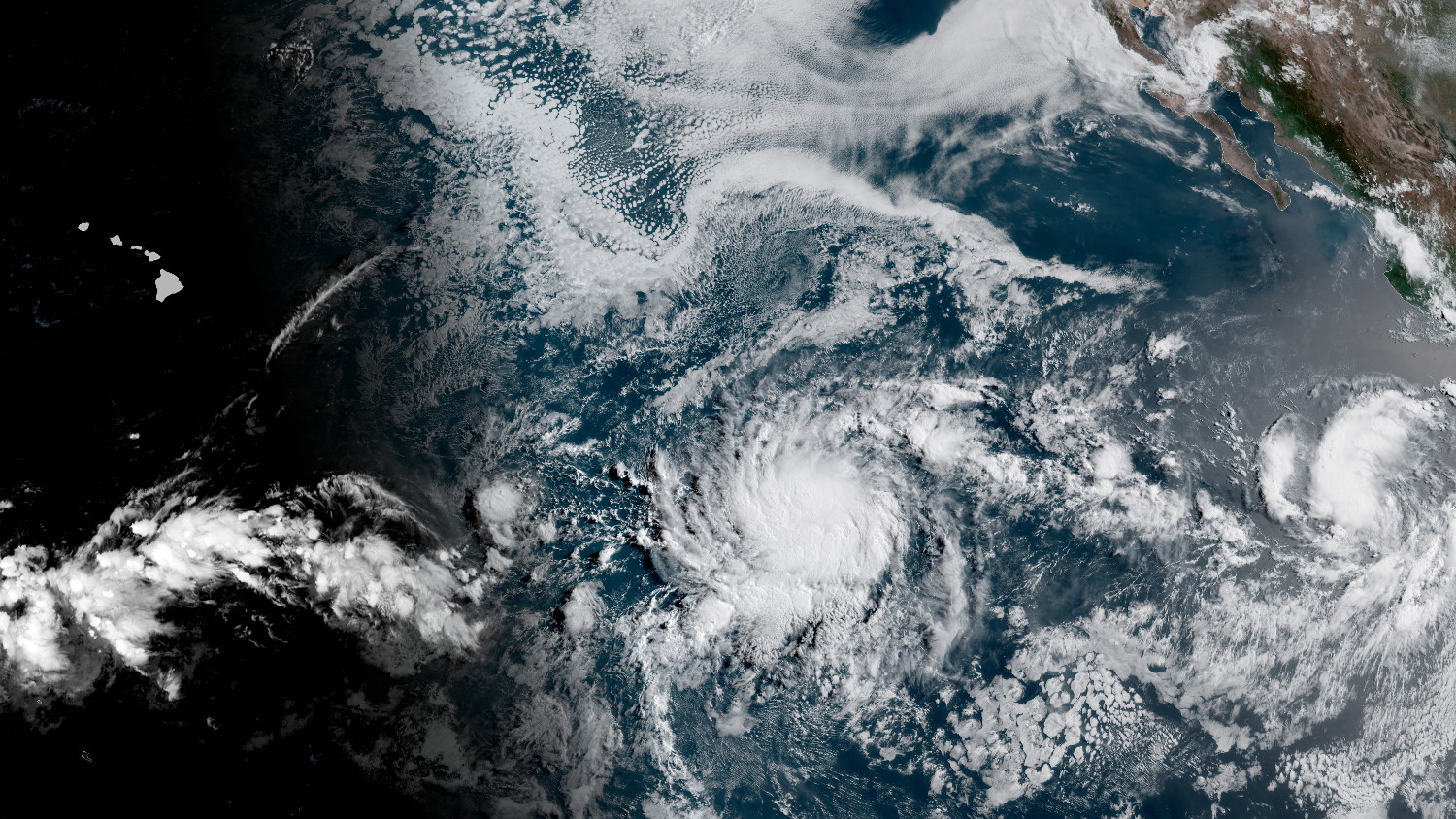 As Tropical Storm Erick Strengthens, New System Forming Behind It

HONOLULU, Hawaiʻi - While Erick is expected to strengthen into a hurricane by Monday, a second tropical storm in as many days has formed over the Eastern Pacific. 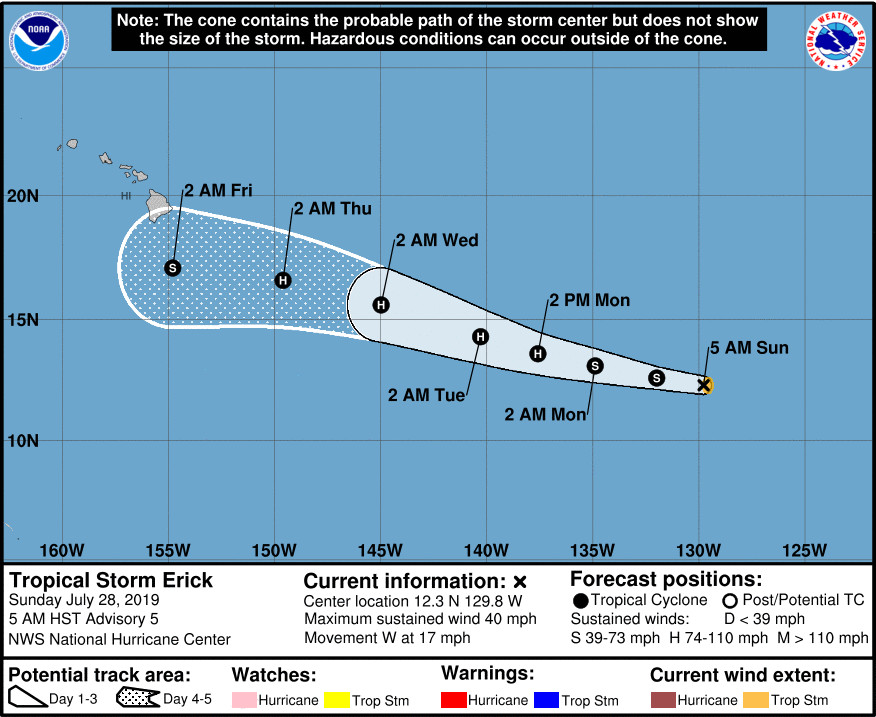 (BIVN) – Two storm systems are developing in the Eastern Pacific and heading west this morning.

Tropical Storm Erick was 1,750 miles east southeast of Hilo as of 5 a.m. Sunday, while a new storm, Tropical Depression Seven-E, has formed behind it.

Erick – with maximum sustained winds are near 40 mph – is moving toward the west near 17 mph, and should continue to do so for the next few days as it strengthens. Erick is expected to become a hurricane by late Monday with continued strengthening through Tuesday, the National Hurricane Center says.

“Although the official forecast puts this system on a track to be near the islands late Thursday or Friday, it remains too early to pin down any impacts with confidence,” the National Weather Service in Honolulu says. “On this track, however, the potential for a wet and windy period Thursday through Friday night is increasing across portions of the islands.” 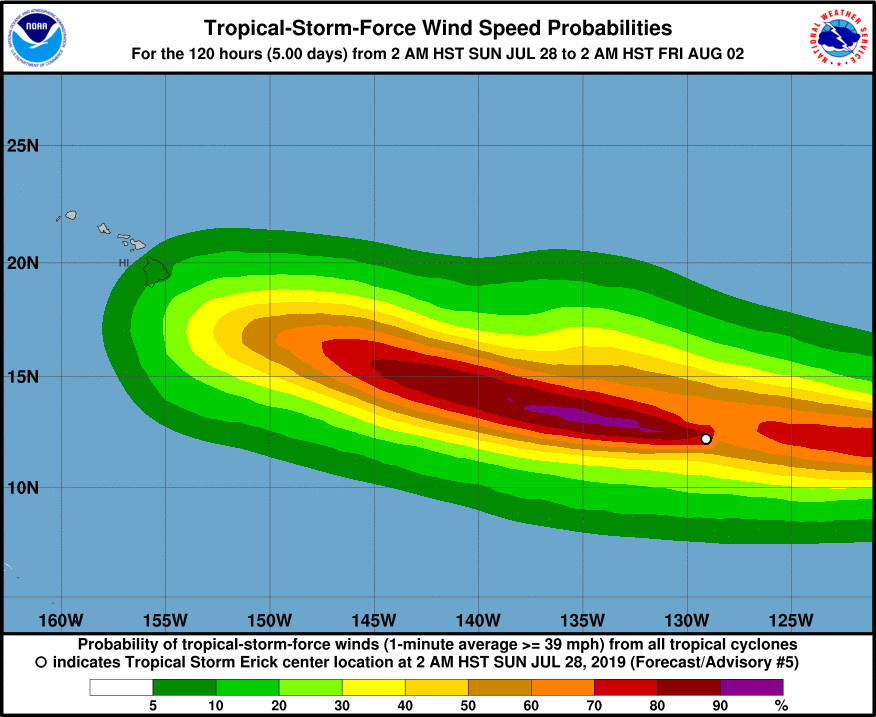 “A narrow but well-defined low to mid-level ridge is forecast by the global models to build westward across the Hawaiian Islands through the entire forecast period, which is expected to keep Erick moving generally westward to slightly west-northwestward,” forecasters wrote in the 5 a.m. NHC discussion. “On the forecast track, Erick is expected to cross into the Central Pacific basin on Tuesday, and the new NHC model guidance remains in good agreement on this track scenario. The new official forecast track is a little south of the previous advisory track, mainly due to the more southerly initial position, and lies close to a blend of the consensus track models HCCA and TVCE.”

Although Erick is forecast to become a hurricane in 36 hours, “steady weakening due to westerly wind shear increasing to more than 20 kt is expected” as it nears Hawaiʻi, forecasters say “resulting in Erick becoming a tropical storm by 120 hours.”

Meanhwile, Tropical Depression Seven-E, which is about 580 miles south southwest of Mexico, is forecast to become a tropical storm later today. The National Hurricane Center says the system is then likely to become a hurricane by Tuesday. 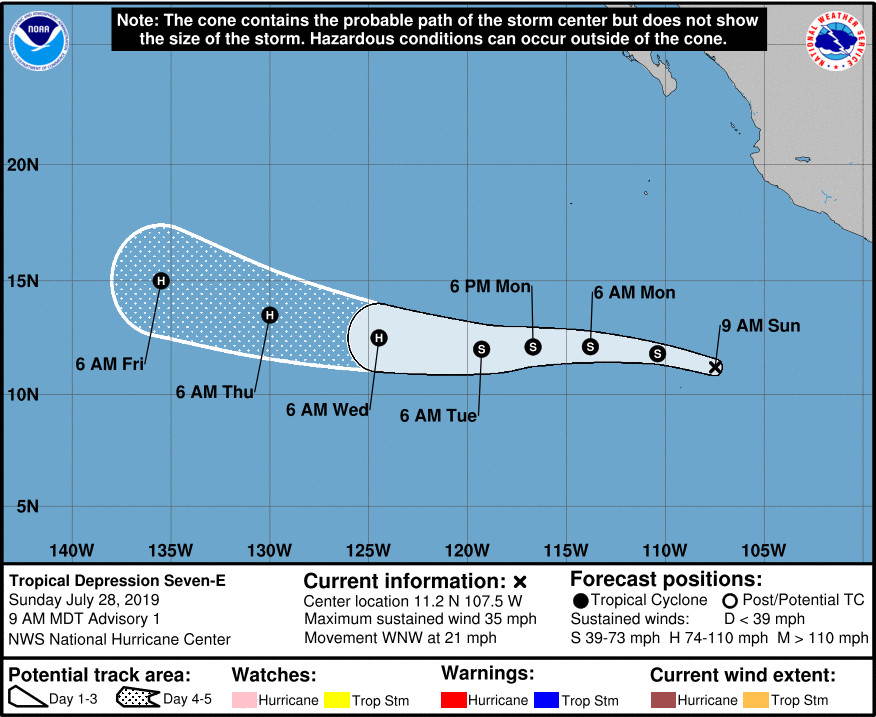 Big Island Video News will be reporting on the development of both of these systems.