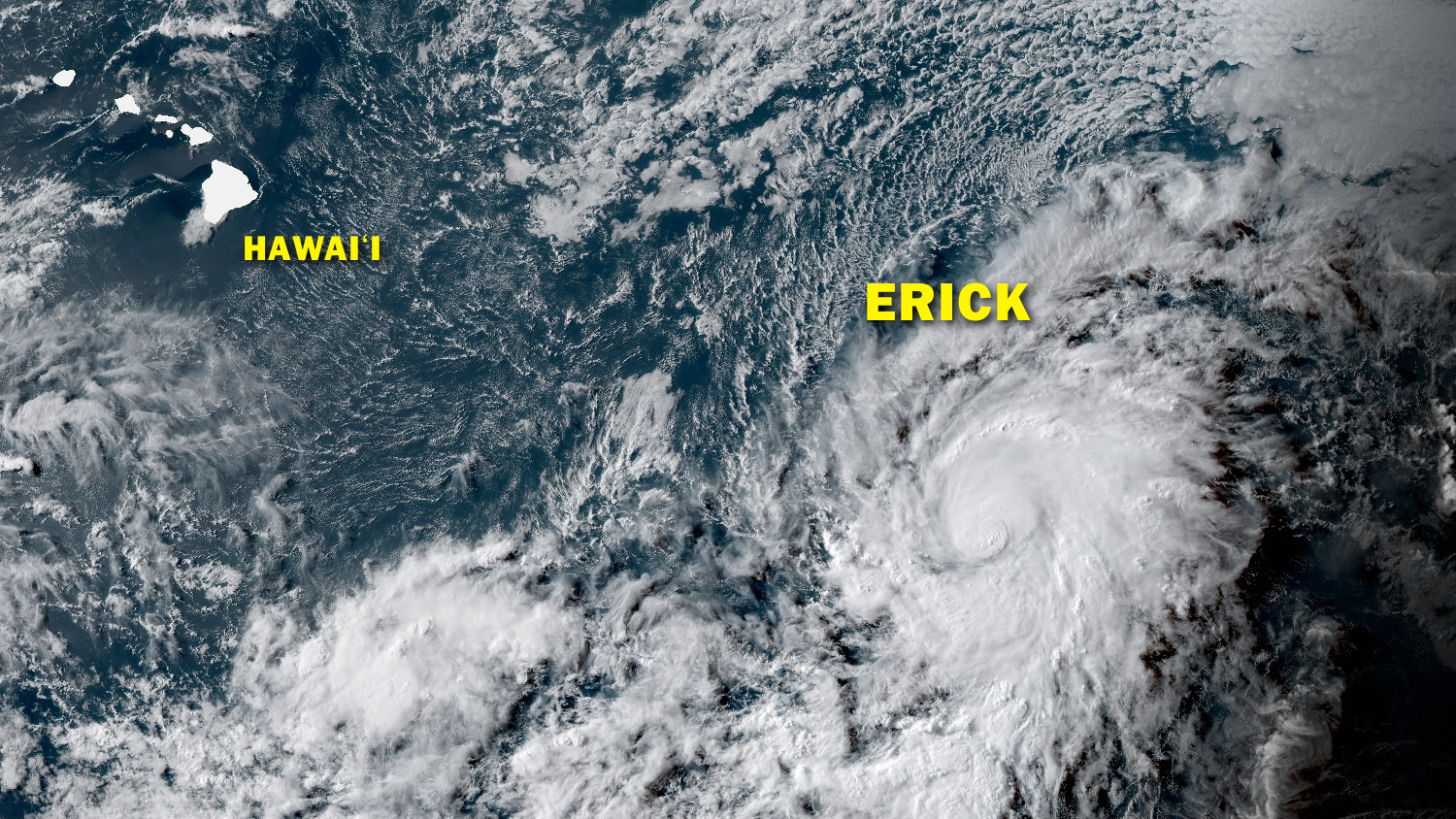 HONOLULU, Hawaiʻi - Tropical Storm Erick has become a hurricane as it enters the Central Pacific, and behind it Tropical Storm Flossie is getting better organized. 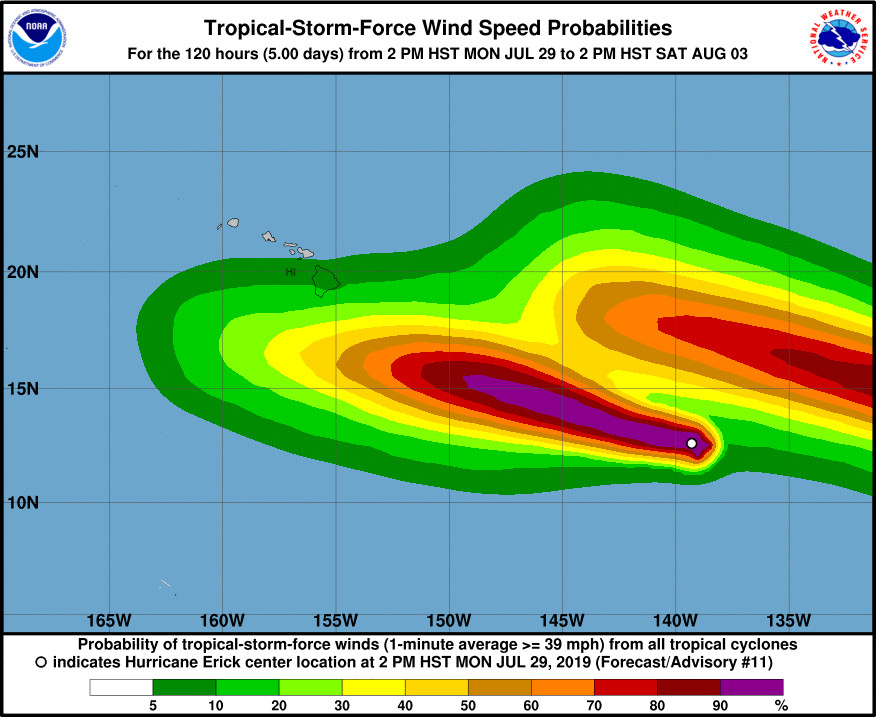 Erick’s maximum sustained winds have increased to near 75 mph (120 km/h) with higher gusts, the National Hurricane Center reported at 5 p.m. HST. Some strengthening is forecast during the next 48 hours before weakening is predicted to start late Wednesday, forecasters say. 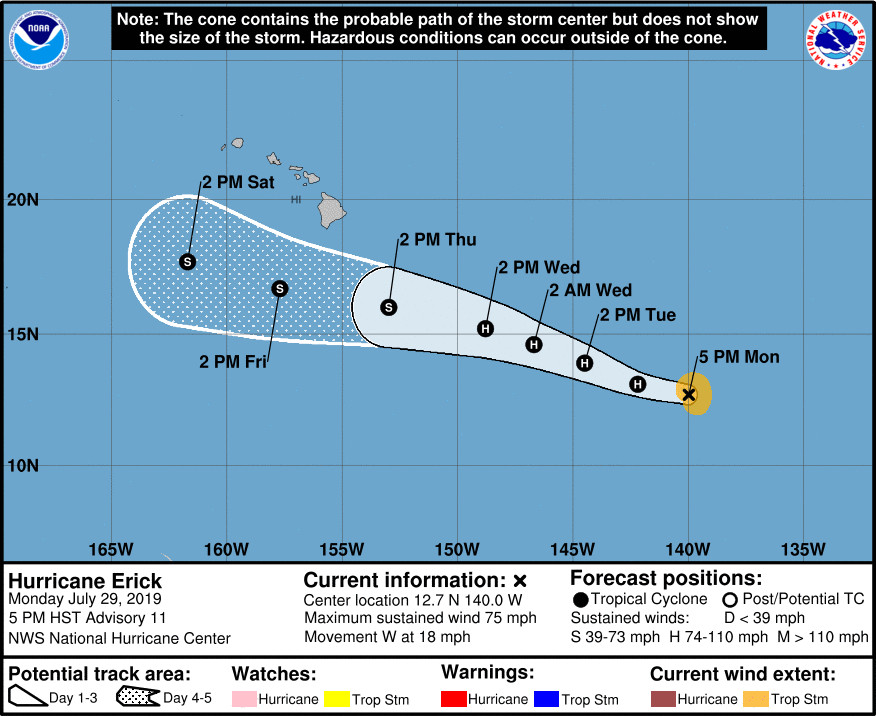 From the 5 p.m. NHC discussion:

Erick has finally become a hurricane. Microwave and visible data indicate that a ragged eye is present, and deep convection has been increasing near the center. All of the satellite agencies agree on an initial intensity of 65 kt, so that will be the advisory wind speed. The environment is expected to generally be conducive for continued intensification during the next 36-48 hours, and Erick could still attain major hurricane status during that time. Thereafter, a significant increase in shear is predicted by almost all of the guidance. This is a strong signal for rapid weakening in the 2-3 day time frame, and the official forecast follows suit, showing a more rapid weakening than the previous advisory.

The hurricane has been moving faster to the west recently, but a longer-term motion is 280/16. The mid-level ridge to the north is still forecast to weaken tomorrow but stay in place, causing a slower west-northwestward track. Track guidance is more divergent tonight with the ECMWF and its ensemble considerably faster than the rest of the models. It is notable, however, that the models have been doing a rather poor job on the track as they all have been biased too slow and poleward during the past couple of days. Thus, the new forecast has been shifted to the southwest of the previous one, on the western side of the model consensus, but is still behind the ECMWF guidance for forecast continuity.

During the Thursday night through Sunday time period, our weather will be highly dependent on the size, track and intensity of Tropical Cyclone Erick. The latest National Hurricane Center forecast for Erick has is passing westward south of the state Thursday night through Saturday. The current forecast locally calls for increasing rainfall chances, especially over the east end of the state beginning Thursday night and continuing through Saturday. Also, the pressure gradient between Erick and the high to our north will likely cause trade wind speeds to increase across the area. However, confidence on what impacts Erick may have on our local weather remains low at this time, due to any potential changes to Erick’s path and intensity.

Behind Erick, Tropical Storm Flossie’s maximum sustained winds have increased to near 65 mph with higher gusts. Steady strengthening is forecast during the next few days, forecasters say, and Flossie is expected to become a hurricane on Tuesday. 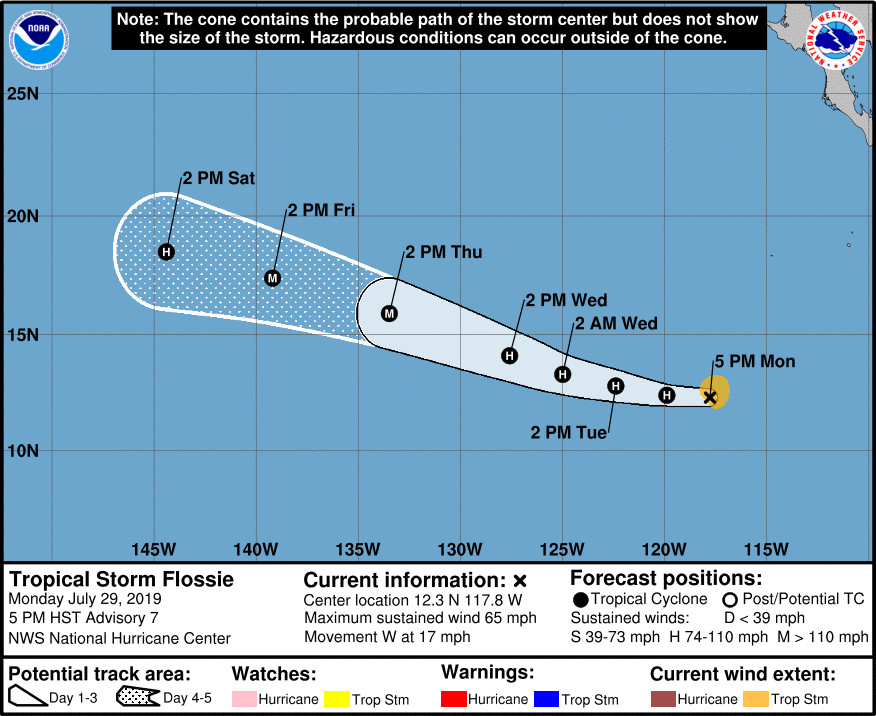 Flossie’s satellite appearance in visible, infrared, and microwave channels has steadily improved since the previous advisory, including the development of a small CDO feature. However, nearly identical to Hurricane Erick this time last night, Flossie’s low-level center has migrated southward toward the strongest convection and is positioned just north of the coldest cloud tops. Similarly, Flossie is being affected by occasional intrusions of dry air and some northerly mid-level wind shear that is undercutting the otherwise favorable upper-level outflow pattern. The initial intensity of 55 kt is based on a blend of satellite estimates of T3.5/55 kt from TAFB, T3.0/45 kt from SAB, and T3.9/63 kt and 60 kt from UW-CIMMS ADT and SATCON, respectively.

The initial motion estimate is westward or 270/15 kt. Despite the recent west-southwestward jog — deja vu Erick last night — the models are in excellent agreement that Flossie will move westward for the next 24 hours along the southern periphery of a deep-layer subtropical ridge, followed by a turn toward the west-northwest on Wednesday, with that motion continuing through the remainder of the forecast period. The new official forecast track is south of and slightly faster than the previous advisory track, mainly due to the more southerly initial position, and lies between the tightly clustered consensus models and the more southerly ECMWF model.

If not for dry air mid-level occasionally wrapping into the hurricane’s inner core, Flossie would be poised to rapidly intensify as per the lastest SHIPS model Rapid Intensification Index (RII). However, similar to Hurricane Erick, the best course of action is to just show steady strengthening until a more persistent RI signal becomes evident. Thus, Flossie is forecast to gradually intensify into a category 3 hurricane by 72 hours, followed by a near-steady state condition thereafter due to Flossie moving across cooler water, which is bounded by the 26C and 26.5C SST isotherms. The official intensity forecast is very similar to the previous advisory, and is close to a blend of the NOAA HCCA and the Florida State Superensemble consensus models.

Come Monday, Erick will have moved west of the area while Tropical Cyclone Flossie, now in the far eastern Pacific, gradually moves closer to the area. The weather pattern this far out in the forecast period will be high dependent on the size, track and intensity of Flossie.