DETROIT, Michigan - Rep. Tulsi Gabbard was reported to be the most-searched candidate on Google after Wednesday night's Democratic presidential debate.

(BIVN) – Hawaiʻi Island’s U.S. Representative, presidential hopeful Tulsi Gabbard, was again the most searched candidate on Google following the second round of Democratic debates in Detroit, televised by CNN.

These two images, released by Google via Twitter, tell the story. 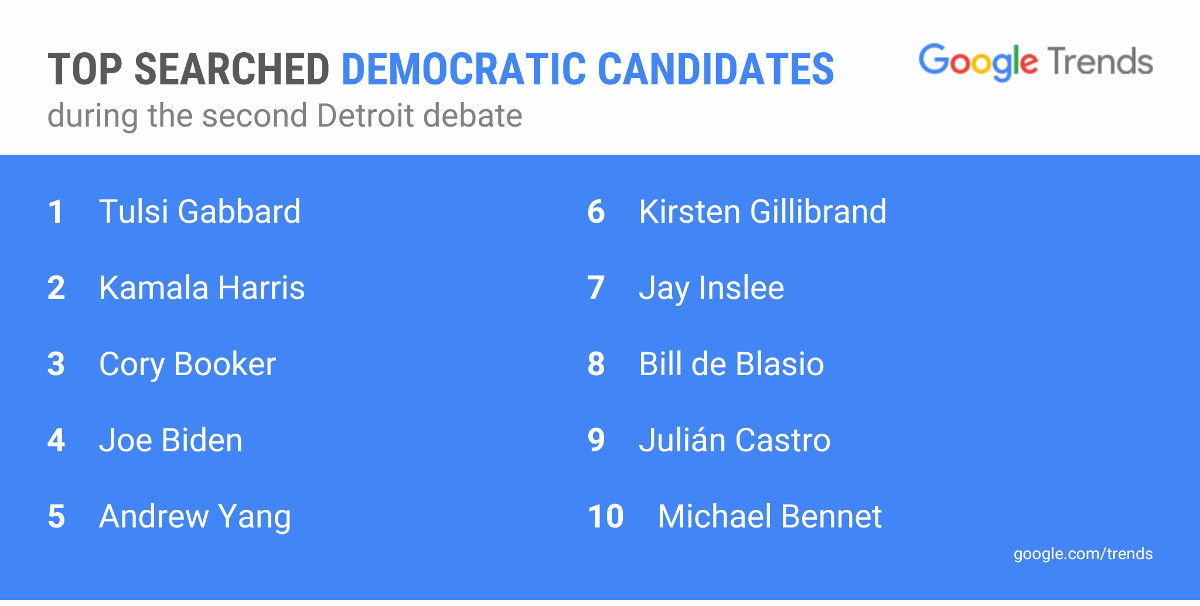 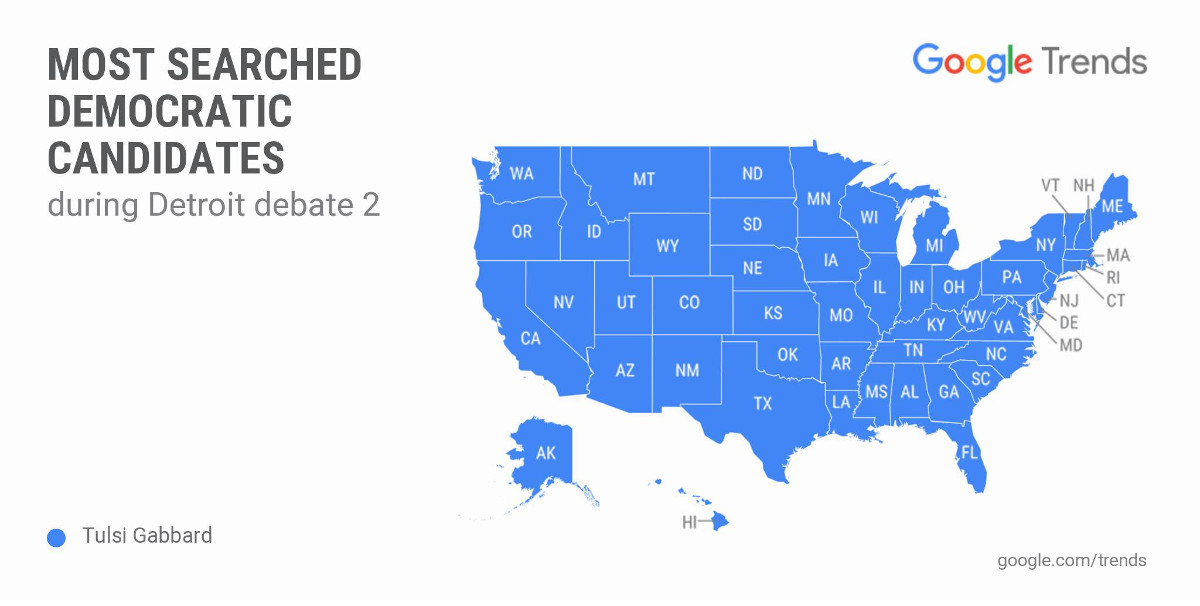 During Wednesday’s debate, Gabbard made headlines when she took aim at U.S. Senator from California, Kamala Harris, for her record as Attorney General of the Golden State.

QUESTION: “Congresswoman Gabbard, you took issue with senator Harris confronting Vice President Biden at the last debate. You called it a quote ‘false accusation’ that Joe Biden is a racist. What’s your response?

GABBARD: “I want to bring the conversation back to the broken criminal justice system that is disproportionately negatively impacting black and brown people all across this country today. Now, Senator Harris says she’s proud of her record as a prosecutor and that she’ll be a prosecutor president. But I’m deeply concerned about this record. There are too many examples to cite, but she put over 1,500 people in jail for marijuana violations and then laughed about it when she was asked if she ever smoked marijuana. She blocked evidence that would have freed an innocent man from death row, until the courts forced her to do so. She kept people in prison beyond their sentences to use them as cheap labor for the state of California and she fought to keep cash bail system in place. That impacts poor people in the worst kind of way.”

HARRIS: “As the elected Attorney General California, I did the work of significantly reforming the criminal justice system of a state of 40 million people which became a national model for the work that needs to be done. And I am proud of that work and I am proud of making a decision to not just give fancy speeches or being a legislative body and give speeches on the floor but actually doing the work of being in the position to use the power that I had to reform a system that is badly in need of reform. That is why we created initiatives that were about reentering former offenders and getting them counseling. It is why and because I know that criminal justice systems are broken, and that I am an advocate for what we need to do to not only decriminalize, but legalized marijuana in the United States.”

GABBARD: “The bottom line is, Senator Harris, when you were in a position to make a difference and an impact in these people’s lives, you did not. And worse yet, in the case of those who were on death row, innocent people, you actually blocked evidence from being revealed that would have freed them until you were forced to do so. there is no excuse for that and the people who suffered under your reign as prosecutor, you owe them an apology.”

“It’s because of you that we are able to hold Donald Trump and other warmongering politicians in Washington accountable for pushing us closer and closer to the brink of nuclear catastrophe,” Gabbard said. “And finally, it’s because of you that I know we can make it to the third debate in September — because the engine of this campaign is grassroots excitement generated by people sharing our message with those that they care about.”

“Our needs are great, and as your president I will put your interests above all else,” Gabbard said.