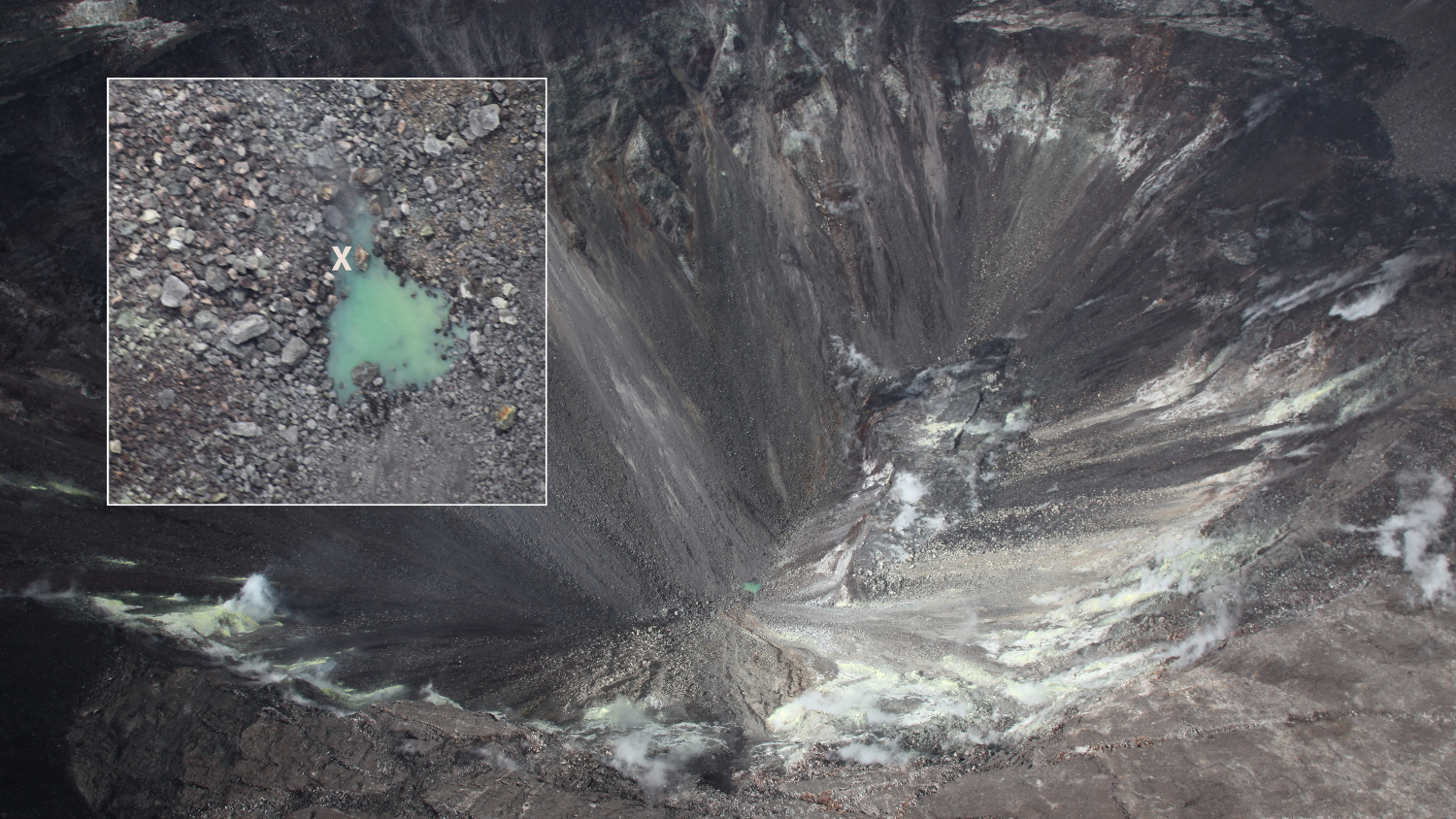 Telephoto views of water in the bottom of Halema’uma’u taken during a helicopter lidar survey on July 25, 2019 (left), when the pond was first observed, and a USGS overflight on August 1, 2019 (right). The pond grew slightly in size and depth between the two dates; an “x” marks the same rock in both photos for comparison. Left photo courtesy of Ron Chapelle, Quantum Spatial. USGS photo (right) by S. Conway.

(BIVN) – Kῑlauea is not erupting, and although there have been no significant changes in activity, the volcano apparently has other surprises in store.

USGS Hawaiian Volcano Observatory (HVO) scientists usually base their research on observations, either visual or instrumental. Interpretations come from these observations, so they must be as good as possible. Incorrect observations can, and have, led to erroneous interpretations.

But what if an observation is tempting but unverified? In that case, it’s time to hold the interpretations until the observation can be shown to be correct or incorrect.

On July 25, 2019, I was enjoying my birthday when a friend sent an e-mail asking if HVO knew about water on the floor of Halema‘uma‘u. Talk about a surprise! The friend’s friend, a helicopter pilot, later sent a photo that showed a possible green pond on the crater floor and provided an oral account of it as being “about as large as a pickup truck.

The next day, observers in the helicopter, which was collecting lidar data of Kīlauea Volcano’s caldera, provided another photo. They said the smooth green patch looked like water, but they had seen no reflection from its surface.

Then, on July 30, a passenger in a different helicopter took a photo from a high altitude that showed a similar feature. This photo was posted on social media with a brief commentary.

So, is water at the bottom of Halema‘uma‘u—or not? Everyone agreed that the photos could well show water, but could the green patch be something else?

Another possibility is that the smooth, green color comes from a flat surface underlain by ash or rock-fall dust blown from the wall of Halema‘uma‘u and trapped in the bottom of the crater. The green color could result from sulfur minerals or algae. A weak point of this idea is that large rocks adjacent to the supposed pond are not coated with ash, much less green ash.

HVO received several inquiries about the photographs and the possibility that they show water in the crater. Water was on everyone’s mind, and rightly so. But Halema‘uma‘u has never had a pond of water since written observations began, so the presence of a pond would be unusual.

If there is water, the next question is, “where is it coming from?” The floor of Halema‘uma‘u is now about 68 m (223 ft) below the level of the water table as measured in a deep well about 1 km (0.6 mi) farther south.

While tempting, speculation was not in order. No one had seen a reflection or ripples on the purported pond of water, and all discussion was based on the suggestive, but non-definitive, photos. So, before HVO could begin assessing how water got there, we had to first be confident that water IS there.

With the “water or no water” question in mind, HVO scientists flew over the summit of Kīlauea on the morning of August 1.

We can now confirm the presence of water at the bottom of Halema‘uma‘u. HVO observers on the helicopter overflight saw reflections from the green pond—the ‘smoking gun’ for water. The pond has clearly enlarged since the earliest photos on July 25.

With the presence of water confirmed, HVO scientists can now start thinking about the implications of water in the crater, relieved of the burden of having to prove its existence. Until we better understand where the water is coming from, it’s impossible to understand its significance.

However, at this time, there is no reason to think hazards at the summit have increased or decreased because of the presence of water.

HVO is now exploring options for additional observations. The inaccessible location of the water—deep within Halema‘uma‘u—makes it impossible to see the pond from most parts of the crater rim, although one potential viewpoint will be examined in the coming days (weather permitting). If that proves out, a webcam can be installed with National Park Service permission to monitor the new pond. If not, remote sensing could be another option for continued observations.

HVO scientists will closely monitor the water in Halema‘uma‘u, and as more information about the pond becomes available, we will keep readers informed through future Volcano Watch articles and posts to our website. Please stay tuned.