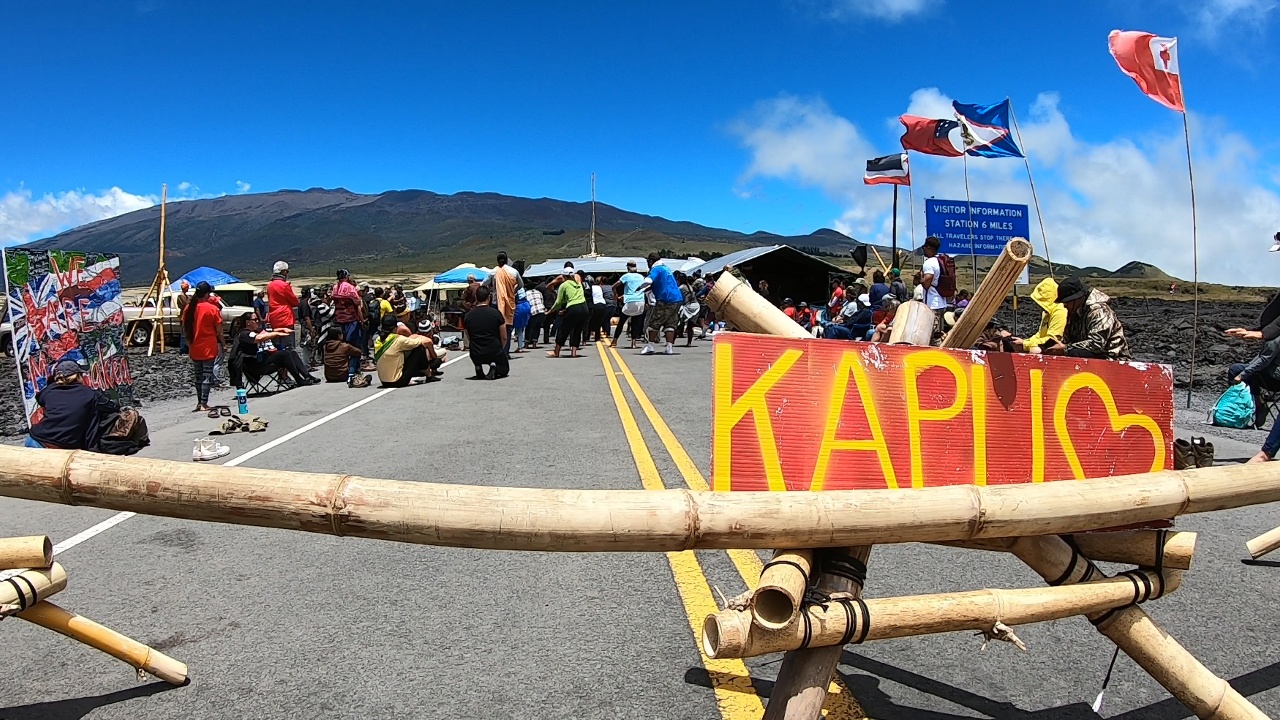 MAUNA KEA, Hawaiʻi - No parking signs have gone up along the Saddle near the Mauna Kea Access Road, and senators Lorraine Inouye and Mazie Hirono weigh in on the situation. 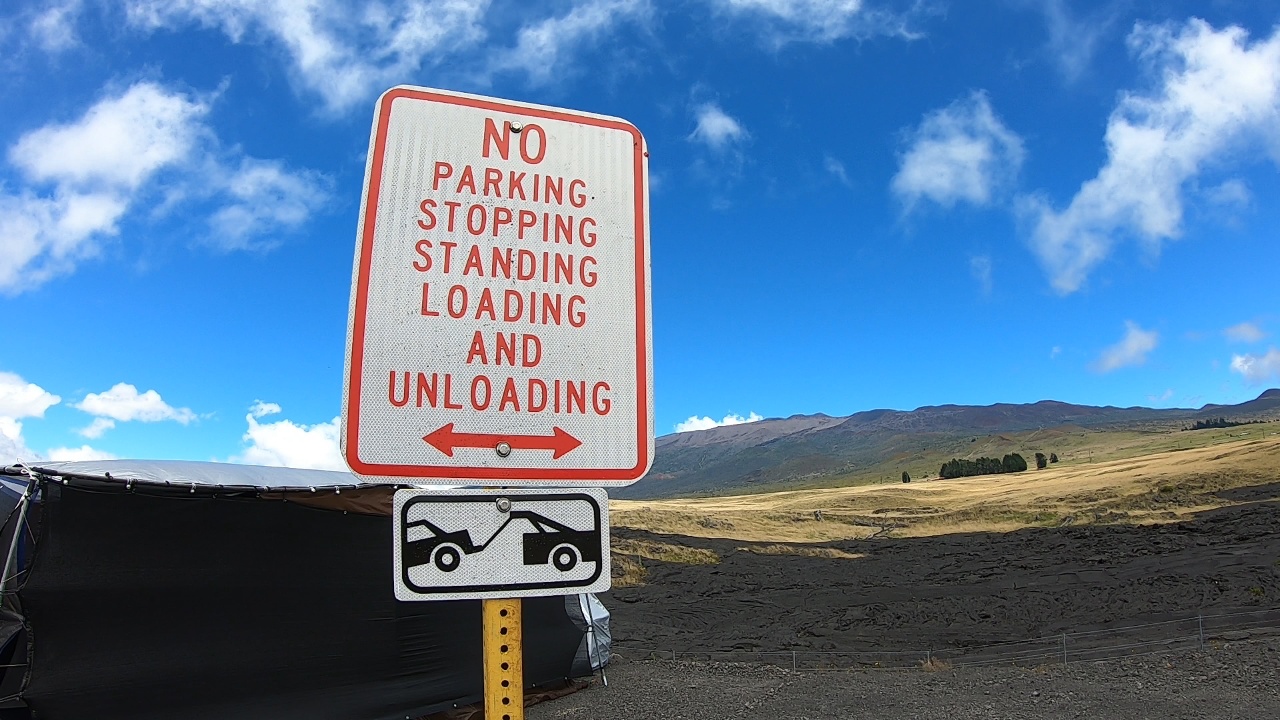 BIVN) – There were a few hundred people gathered at the Puʻuhonua o Puʻuhuluhulu / Mauna Kea Access Road intersection today. It is Day 37 of the scheduled start of construction on the Thirty Meter Telescope, but TMT opposition has prevented crews from ascending the mountain to begin work.

Numerous “no parking” signs – erected by the Hawaiʻi Department pf Transportation – now line both sides of the Daniel K. Inouye Highway on either side of Puʻuhuluhulu and the Mauna Kea Access Road.

The signs say “no parking, stopping, standing, loading or unloading,” with an image of a car being towed. There have been reports of vehicles being ticketed.

“They will begin enforcing new rules along the highway today,” wrote Kahoʻokahi Kanuha, one of the leaders of the opposition to the TMT, over Facebook. “If we park a ‘reasonable’ distance from the road then that ‘shouldn’t’ be a problem. Super vague language that’s not clearly defined. I told them we need something more definitive and they said that’s the best they can do for now.” 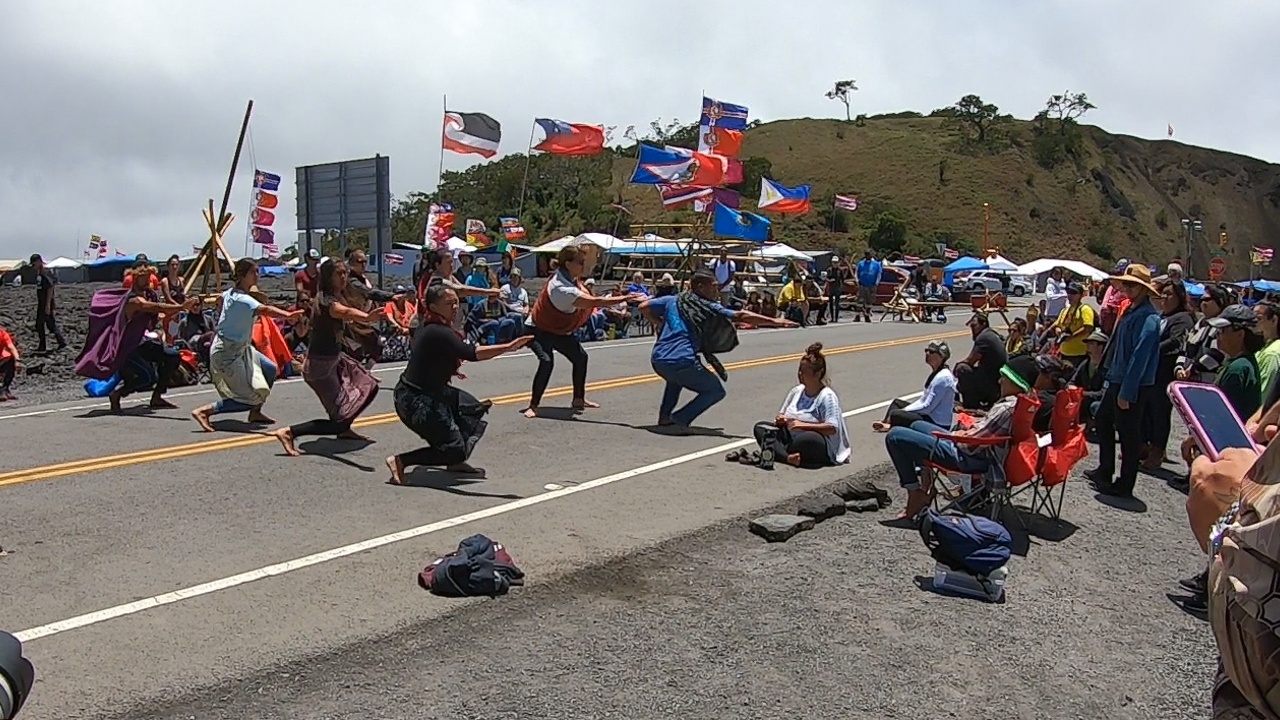 In a letter to Governor David Ige that was also published Tuesday in the Hawaiʻi Tribune-Herald, Hawaiʻi Island (District 4) State Senator Lorraine Inouye made a strong statement in favor of the Thirty Meter Telescope, saying “TMT must move forward now.”

“We cannot pick and choose. Laws must be followed, all laws, all the time,” Sen. Inouye said. “Public trust requires bold leadership: Difficult decisions need to be made about Maunakea, its management, and how we address the needs of our host culture.”

“Gov. Ige, I supported your election,” Inouye wrote. “I know you know right from wrong. I know you value education and science and believe all our children deserve a better future. I also know you know nothing good comes easy. We need you now to protect all of us with your leadership.”

U.S. Senator Mazie Hirono paid a quiet visit to the base of Mauna Kea recently, and later spoke to KHON news.

Senator Hirono said the visit was “very respectful.” She said she wanted to go and talk to some of the kūpuna and some of the leaders that are there, “on a day when there weren’t thousands of people there.”

She spent several hours there at the site, and commented those gathered in opposition to TMT are “very well organized” and “very committed to their position that this is a sacred mountain and decades of broken promises regarding the mountain.”

“They’re taking a stand,” Hirono said, “and I went there to listen and respect their views.”

The Hawaiʻi County Council Finance Committee is meeting this evening in Kona, and getting an update on Mauna Kea-related Hawaiʻi County expenditures – which the State of Hawaiʻi has indicated it will reimburse. The number has reportedly ballooned to $3.2 million, so far.