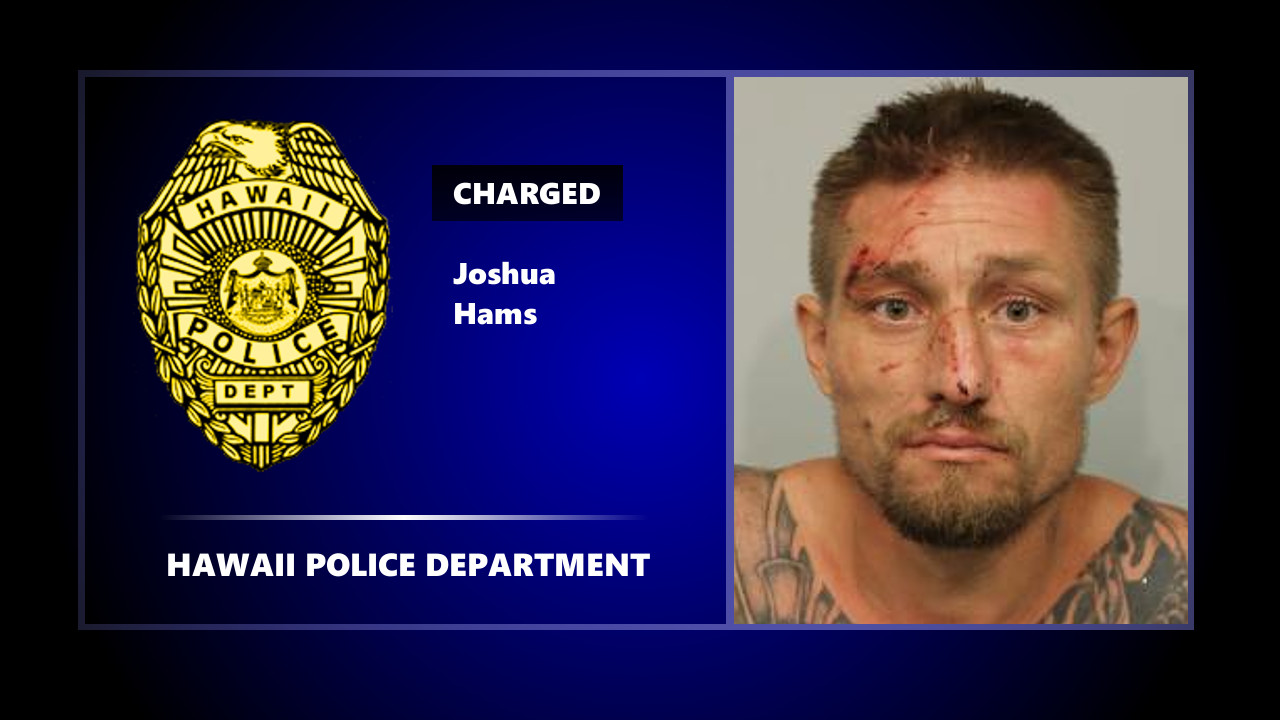 (BIVN) – A Kailua-Kona man faces multiple charges after he was arrested in connection with what authorities say was a crime spree that that spanned four police districts and encompassed both East and West Hawaiʻi.

38-year-old Joshua Hams was arrested by Hawaiʻi Police yesterday, August 21, just before 1:40 p.m. at a home on Kalamauka Street in Kailua-Kona.

This afternoon at 1:30 p.m. detectives from the Area II Criminal Investigations Section charged Ham with the following crimes:

Due to the probation violation charge, hams is being held without bail at the Kona Police cellblock. Bail was set at $812,000 on the remaining charges.

Police provided a preliminary timeline of yesterday’s events. They note that “not all the reports were coming in the order they occurred and there were delays from the time of occurrence to the time reported to central dispatch.”

8:19 a.m. South Hilo patrol officers respond to a call “of a possibly mentally unstable male at a hotel on Banyan Drive in Hilo. The reporting party stated that the male may be armed with a firearm and was operating a dark colored Honda SUV.”

9:20 a.m. After initially being unable to locate the male party, officers find him in the area of the hotel on Banyan Drive. “The driver of the vehicle refused to stop, and police did not continue to pursue the vehicle out of concern for public safety,” the police report. “A short time later police responded to a call of a traffic accident with the same suspect vehicle and a dark colored Toyota truck at the intersection of Komohana Street and West Kawailani Street in Hilo. The driver of the Toyota truck was not injured in the accident.”

10:50 a.m. Kaʻū Patrol officers receive a call “reporting a male party in his mid to late 20’s, with no shirt and numerous tattoos walking on the side of the road just south of the Naʻalehu Police Station carrying a firearm.” Police say the description matches that of the earlier call of a possible mentally unstable male party from Hilo.

11:36 a.m. The same suspect reportedly robs a gas station at gunpoint near the 110-mile-marker on Route 11. Police say he then leaves with an undisclosed amount of currency. No one is injured in the robbery.

12:01 p.m. “The stolen State vehicle is located by police in the area of Ahulani Street in Kailua-Kona,” police say. “The suspect then fires a firearm out of the window of the vehicle and flees the area. No one is injured in this shooting.”

12:13 p.m. The suspect heads to a retail establishment on Makala Street in Kailua-Kona “where he attempts to enter the locked front door. He then fires a round into the store shattering the locked glass door. Once inside the store the suspect removes several items and flees the area,” police write. “No one is hurt in this robbery.”

12:18 p.m. The suspect reportedly strikes several vehicles at the intersection of Kuakini Highway and Hualalani Road.

12:24 p.m. The suspect reportedly “attempts to steal a car at gunpoint from a female party at a gas station on Lako Street in Kailua-Kona. He is unsuccessful in his attempt but is subsequently able to steal another vehicle, a dark colored SUV, at gunpoint from a another female victim at the same gas station. No one is harmed in this vehicle theft.” Police say that after stealing this SUV, “the suspect heads to a residence on Kalamauka Street and barricades himself within the residence. Police locate him on Kalamauka Street and the Hawaiʻi Police Special Response Team is activated and respond to the scene.”

1:39 p.m. The suspect is arrested by members of the police tactical team. No one is hurt during the incident and arrest.