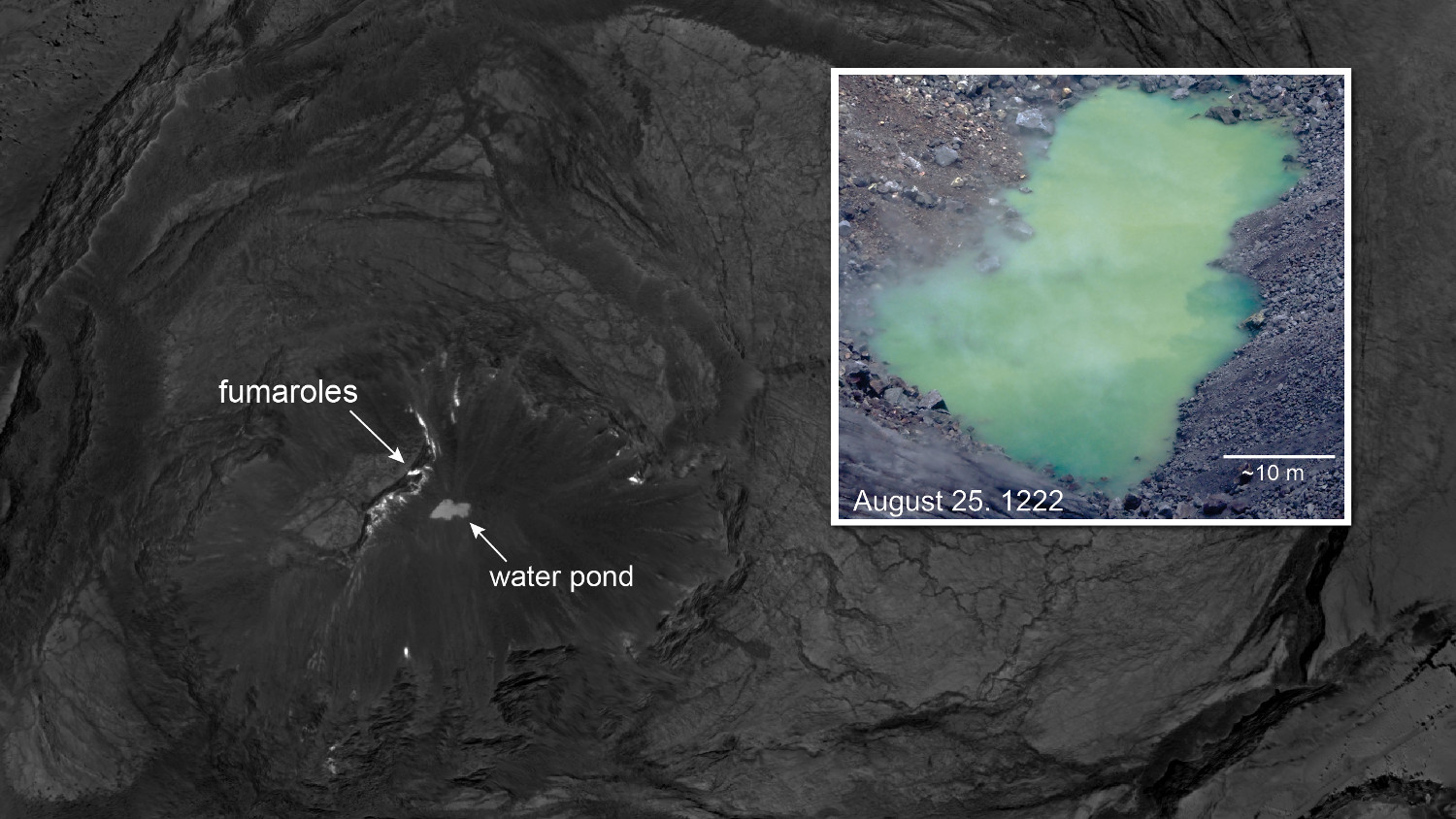 HAWAIʻI VOLCANOES NATIONAL PARK - A new thermal map has been published showing the location of the pond, and the heated fumaroles, at the bottom of the collapsed Halemaʻumaʻu crater. 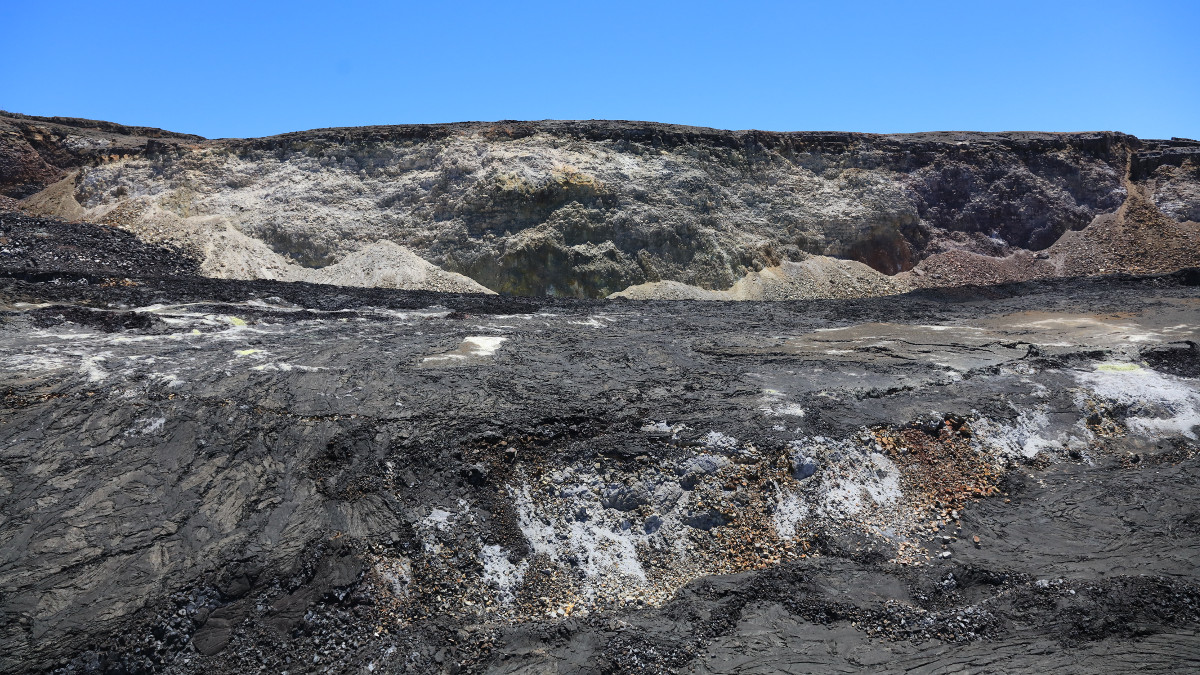 This view of the southern wall of Kīlauea’s caldera shows a feature known as the “south sulfur bank.” A sulfur-rich and highly altered area was present here prior to the summit collapse events in 2018, but more of it was exposed as the crater walls dropped during the collapses. Today the exposure is approximately 100 m (300 ft) tall, whereas the exposed sulfur bank was only a couple of meters (yards) high before 2018. USGS photo by C. Parcheta, 08-22-2019.

(BIVN) – As scientists continue to keep an eye on the growing pond of water at the bottom of Halemaʻumaʻu, a new thermal map has been published showing the new features of the Kīlauea Volcano summit.

The pond of water continues to enlarge, the USGS Hawaiian Volcano Observatory wrote in an image caption posted August 25.

“In theses photos from August 23 at 10:32 a.m. (left) and August 25 at 12:22 p.m. (right), note the change at the western (near) end of the pond and the disappearance of the rocks near the eastern (far) end of it,” USGS HVO wrote. “No bubbles were visible on the pond surface during the August 25 observations.”

On August 22, the USGS HVO published a thermal map – only the third USGS HVO map published to its website since the end of the 2018 eruption of Kilauea on the lower East Rift Zone and the collapse of the summit caldera. 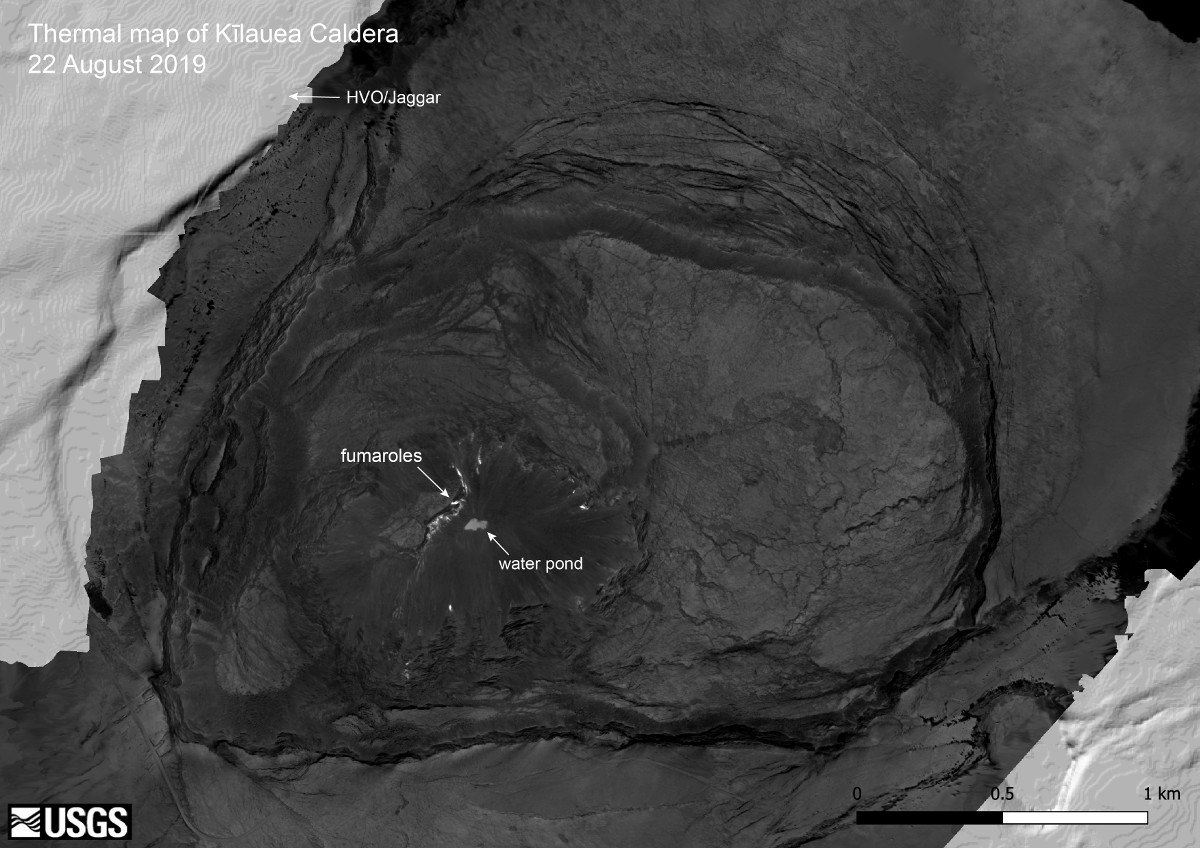 “This thermal map was constructed from 1008 images collected by a thermal camera during a helicopter overflight on August 22, 2019,” scientists wrote. “The hottest features in the caldera are the numerous small fumaroles in Halema‘uma‘u, and these areas have temperatures up to 200 degrees Celsius (392 degrees Fahrenheit).”

“The pond of water at the bottom of Halema‘uma‘u also stands out, and has a surface temperature of approximately 70 degrees Celsius (158 degrees Fahrenheit),” HVO said. “The light grey areas in the upper left and lower right corners of the map are regions not covered by the thermal map, and show a shaded-relief basemap.”

Kīlauea Volcano is not erupting. USGS Hawaiian Volcano Observatory geophysicist Jim Kauahikaua recently talked about the Halemaʻumaʻu water pond during a radio interview with Sherry Bracken, and what the new feature might mean as far as future volcanic activity.