MAUNA KEA, Hawaiʻi - A structure built on Hawaiian Home Lands that was getting a lot of attention was taken down today by law enforcement. 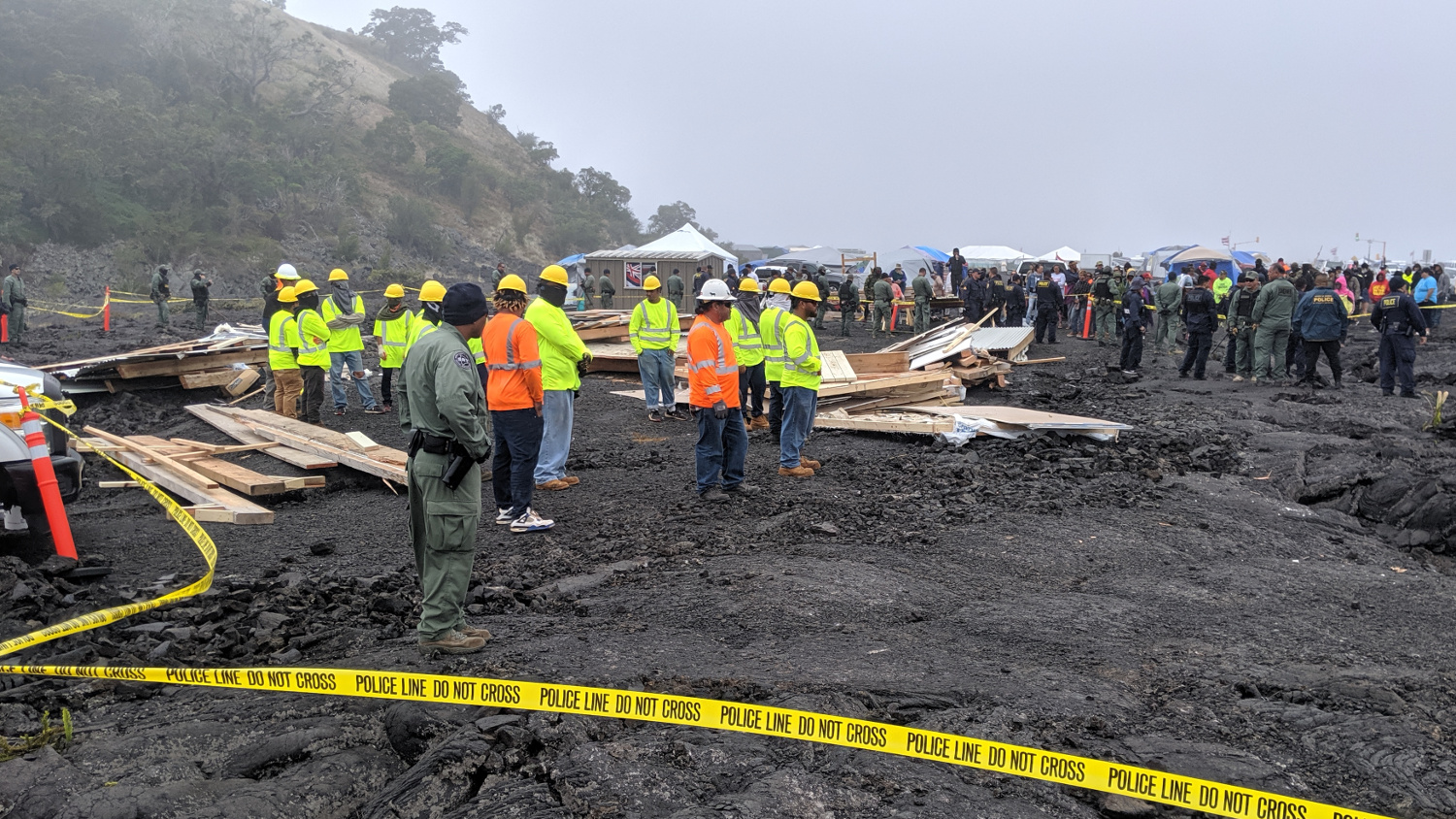 (BIVN) – Law enforcement surrounded the unpermitted building erected on Hawaiian Home Lands near Puʻuhuluhulu on Friday morning, dismantling the structure as an emotional crowd looked on.

(UPDATE) – The Office of Hawaiian Affairs issued the following statement on Friday:

State law enforcement’s swift dismantling today of a small wooden structure built by protectors earlier this week brings into sharp focus the longstanding and particularly abhorrent double standard the state uses to enforce land use laws against Native Hawaiians as opposed to others.

Law enforcement removed the small hale, which was located on lands controlled by the Department of Hawaiian Home Lands at the base of Maunakea, because it was an unpermitted structure. Yet the state has a long history of expressly allowing unpermitted and unauthorized astronomy structures that were far larger and located in far more environmentally- and culturally-sensitive areas of the mountain.

The first three telescopes built on the summit of Maunakea failed to apply for a conservation district use permit and therefore were unpermitted for at least six years.

In 1997, BLNR approved four after-the-fact subleases for telescopes already built or in the process of being built on the summit.

This selective enforcement re-enforces the State Auditor’s finding in 1998 that the state and the University of Hawaiʻi manage Maunakea for astronomy at the expense of everything and everyone else. Moreover, the particularly offensive way todayʻs selective enforcement was carried out, which included the wholly unnecessary sawing of a Hawaiian flag, is deeply troubling, and further adds to the trauma of the Native Hawaiian people and could have escalated an already tense situation. 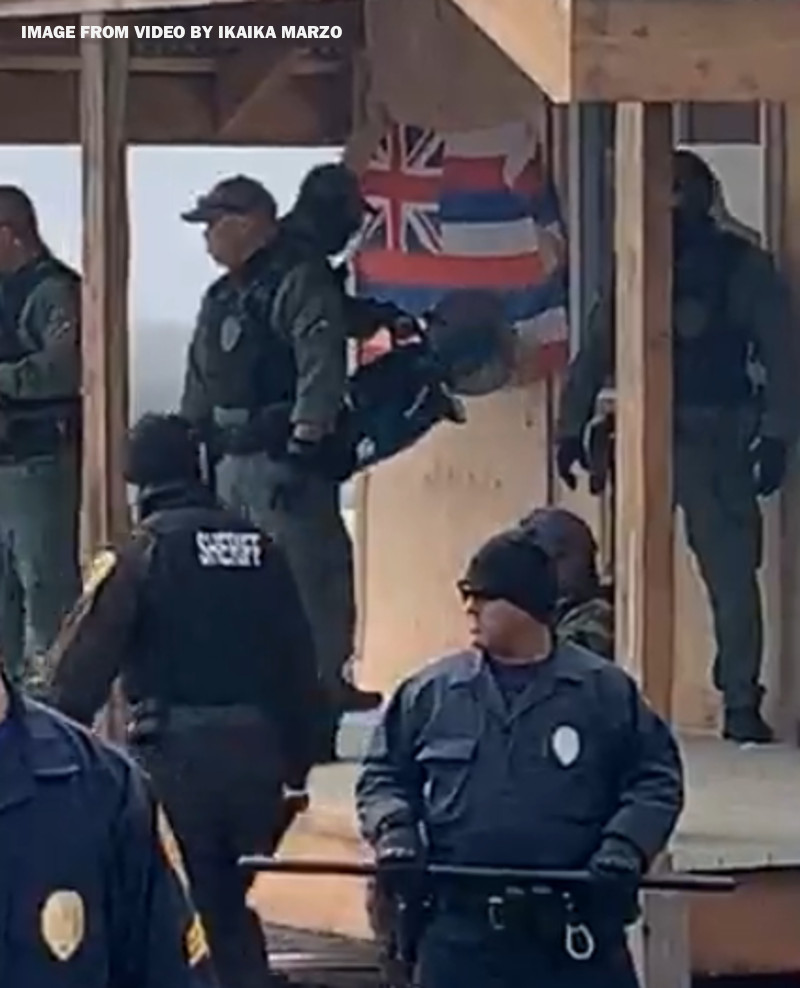 The State of Hawai’i removed an unpermitted structure near the Pu’u Huluhulu site on Department of Hawaiian Home Lands property on Friday, Sept. 6, 2019.

Removal efforts were conducted by Department of Transportation (DOT) personnel, at the request of DHHL, in a process that took approximately four hours. Prior to the removal of the unpermitted structure, two individuals were arrested at the site for Obstruction of a Governmental Operation. State and Hawai’i County law enforcement personnel remained present throughout the removal to ensure the security of the operation and the safety of everyone involved.

The structure was constructed with a floor, framing, and a roof that appeared to resemble a building anticipated to be permanent. Prompt removal was deemed necessary as the structure posed serious health and safety concerns related to fire protection and structural integrity.

Additionally, since the structure was built without any regulatory oversight, there were concerns about the impact it could have on the land and the possible introduction of invasive species including fire ants.

“Given the health, safety, and environmental concerns, the Department prioritized the prompt removal of the structure,” said Hawaiian Homes Commission Chair William J. Aila, Jr.  “With the assistance of DOT personnel, we were able to accomplish this task quickly and efficiently. DHHL will be reimbursing our partners for this work.”

“Law enforcement has deliberately refrained from escalating its approach to the current protest because it was important to provide some meaningful space and time for all of us to find a peaceful resolution to this situation,” said Governor David Ige.  “However, this type of permanent structure erected without DHHL permission, and without being regulated or inspected in any way, cannot be allowed.  The safety risk is too great.”

DHHL posted a Notice to Vacate on Sept. 4, 2019, both on the property and to the individual who organized the erection of the structure.

Any unclaimed property will be handled in accordance with 171-31.5, HRS.

The Hawaii Department of Transportation issued this statement as the operation got underway:

The State of Hawaii will be removing a structure that was unlawfully constructed on Department of Hawaiian Home Lands (DHHL) property. The structure was built close to Puu Huluhulu (Hilo side) as part of the anti-TMT protests. The structure is unpermitted and presents potential health, safety and environmental concerns. Hawaii Department of Transportation (HDOT) crews were tasked with removing the unpermitted structure at the request of DHHL with the support of Public Safety Department Sheriff’s Deputies and Hawaii County Police Officers. A media availability for credentialed journalists is scheduled after the action begins.

Aloha, we are aware that the Department of Hawaiian Homelands has mobilized within the pu’uhonua to deconstruct a building that was constructed this past weekend. Two arrests were made and those arrested by law enforcement went peacefully. This is a highly emotional moment and we ask that everyone remain in kapu aloha as we get through this day. We also ask that those livestreaming be respectful of people’s emotions and keep a distance from those in distress. We condemn every example of the state of Hawai’i’s selective enforcement of the law, especially as it is currently targeting protectors. Undeterred by today’s actions of the state, all in the pu’uhonua remain united and committed to the protection of Maunakea in Kapu Aloha.

The structure – which was set to be a library and learning center for keiki – was completely removed by noon Friday. On the scene, Big Island Video News interviewed Krishna Jayaram, a special assistant to the Hawaiʻi Attorney General, as well as Mikey Glendon, the Hawaiian Homes beneficiary familiar with the building.

Law enforcement made no attempt to clear the Mauna Kea Access Road Friday morning. We will have more information on this situation.