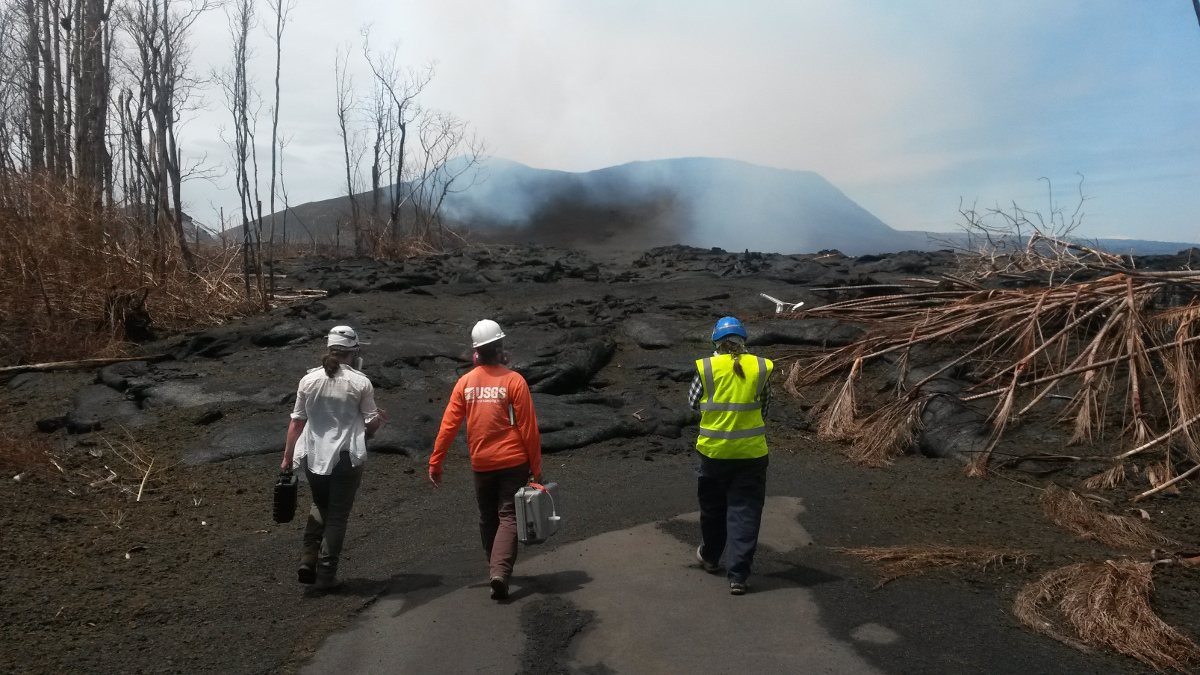 A USGS gas geochemist and colleagues from the United Kingdom carry multi-gas sensors as they approach the degassing fissure 8 cone during Kīlauea Volcano’s 2018 eruption. The collaboration between HVO and UK universities allowed for better characterization of the aerosols emitted during the eruption, which, in turn, has better informed the larger volcanology community about the chemistry of these kinds of plumes. USGS photo by P. Nadeau, August 2018.

VANCOUVER, Washington - Volcanic gas scientists with the USGS will meet for a workshop under CONVERSE, the Community Network for Volcanic Eruption Response.

(BIVN) – Volcano scientists are gathering for a “volatile meeting” this week in Vancouver, Washington.

This week, a group of volcanic gas scientists from across the United States, including staff from the USGS Hawaiian Volcano Observatory (HVO), will gather at the Cascades Volcano Observatory in Vancouver, WA, for a workshop to improve and facilitate collaboration within the volcanic gas community during times of eruption or volcanic unrest. The attendees are a subset of a larger group of volcanologists that form CONVERSE (Community Network for Volcanic Eruption Response).

00During Kīlauea Volcano’s 2018 lower East Rift Zone eruption and summit collapse, HVO worked around the clock to monitor, measure, and keep track of all aspects of the ever-changing volcanic activity. But HVO’s staff, which numbered 25-30 at the time, couldn’t do it alone, especially when it became clear that the eruption was not going to end after just a few days. Colleagues from other USGS volcano observatories, including those in Alaska, Washington, and California, cycled through the eruption response team, with some individuals assisting HVO staff for weeks at a time.

In addition to USGS colleagues who assisted with the Kīlauea eruption response, university scientists were also integral to the effort in many ways. The University of Hawaii at Hilo (UHH) opened its doors to the entire eruption response team when HVO and Hawai’i Volcanoes National Park were evacuated. Furthermore, UHH scientists played a crucial role in monitoring the eruption, particularly in terms of situational awareness through UAS (unmanned aircraft systems, or drones) and rapid measurements of changing lava chemistry.

Still, USGS and UHH expertise is not limitless. In some cases, we needed to reach beyond our USGS and local university colleagues to other academic institutions for specialized expertise with certain instrumentation and measurement techniques.

For example, HVO measures gas emission rates and the chemistry of volcanic volatiles, but there are also many tiny liquid and solid particles (aerosols) emitted in volcanic plumes. During the 2018 eruption response, HVO did not have the equipment or staff to adequately measure both gases and particles, so colleagues from universities in the United Kingdom were invited to Kīlauea to study the aerosol content of the eruptive plumes.

Unfortunately, such collaborations are not always as easy or timely as they could be. The volcanology community within the United States and around the world is fragmented between various government agencies, including the USGS, NOAA, NASA, and others, as well as many other academic institutions, such as museums, universities, and colleges.

This is where workshops like the one this week come in, with the goal of streamlining collaborations between these varied groups. CONVERSE, a research coordination network funded by the National Science Foundation, brings together volcanologists from many different institutions to enhance the ability of the volcanology community to work together on scientific efforts. The network will focus first on U.S. researchers, and eventually on international collaborations.

CONVERSE is not focused specifically on volcanic volatiles, but is an interdisciplinary collaboration, with scientists specializing in other research areas, including seismology, deformation, modeling, petrology, and public communications. Each of the CONVERSE subgroups will have its own focused workshops, and will later come together to create a broad, interdisciplinary plan for studying future eruptions in the United States. In some of those groups, Kīlauea’s 2018 eruption response will be a topic of much discussion—what went right during the eruption response, and where might we have been able to do better?

By asking such questions and bringing volcanologists from around the country together to answer them, CONVERSE aims to better monitor restless volcanoes. With more collaborative monitoring, we can collect more and higher quality data, and ultimately better understand how volcanoes work, including ours here in Hawaii.