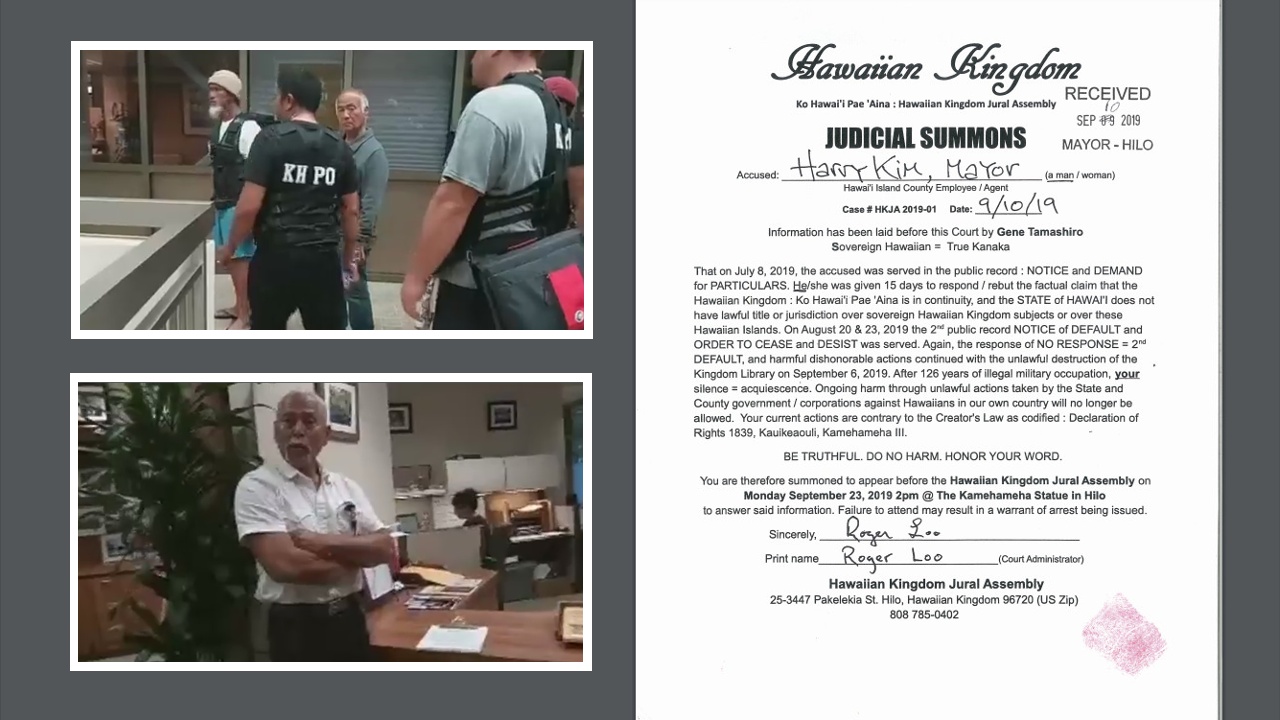 image from Aloha Nation Live livestream, and copy of the "Judicial Summons"

HILO, Hawaiʻi - A group claiming to represent the Hawaiian Kingdom went to the County building on Tuesday, some wearing tactical vests, to serve the mayor their written demand.

(BIVN) – A group of people served Mayor Harry Kim and other county officials last week with a “judicial summons” to appear before a September 23 “Hawaiian Kingdom Jural Assembly” to answer a “notice and demand for particulars.”

“Failure to attend may result in a warrant of arrest being issued,” the judicial summons stated.

Gene Tamashiro served the papers during a bief, unscheduled meeting with the mayor in his office on Tuesday. The encounter was recorded and posted to the Aloha Nation Live Facebook page. The group represents “the peoples response to the ongoing Ilegal occupation of Hawaii (1893) by the U.S. Federal Corporation,” the page says.

Tamashiro arrived at the county building with a group of people – some wearing vests with the letters KHPO, meaning “Kingdom of Hawaii Post Office”, according to one video – and attempted to serve the paperwork to other offices that same day. The list of intended recipients included County Prosecuting Attorney Mitch Roth, the nine Hawaiʻi County Councilmembers, and Corporation Counsel Joe Kamelamela.

According to the judicial summons,the jural assembly will take place at 2 p.m. at the Statue of King Kamehameha in Hilo.

Tamashiro says the mayor and other county officials were served a “notice of default and order to cease and desist” in August, but they never responded. The summons also stated that the “harmful dishonorable actions continued with the unlawful destruction of the Kingdom Library on September 6, 2019.”

Speaking by phone about the incident the next day, Mayor Kim did not appear to be too concerned by the summons. He said he did not intend to appear before the so-called Hawaiian Kingdom Jural Assembly. Kim is familiar with Tamashiro and has spoken with him previously.

Tamashiro has been present at the base of Mauna Kea for the ongoing standoff against the Thirty Meter Telescope. Unaffiliated with opposition leadership, Tamashiro has spearheaded the Hawaiian Kingdom radio, broadcasting from the encampment on 93.5 FM for five miles in all directions.

Leaders of the TMT opposition have disavowed Tamashiro’s actions, and say they do not represent the Kū Kiaʻi Mauna movement. Hawaiian Kingdom advocates have likewise criticized the action.

“We were all born into this 126 year hewa, but those who get paid to serve and protect in the TRUTH and the LAW must do so… NOW,” wrote Tamashiro in a Wednesday email. “The lives and future of our beloved children and sacred ‘aina are in grave danger… We all, especially our leaders need to REPENT FROM TRANSGRESSIONS OF THE LAW.”

“BE TRUTHFUL. DO NO HARM. HONOR YOUR WORD,” Tamashiro wrote.