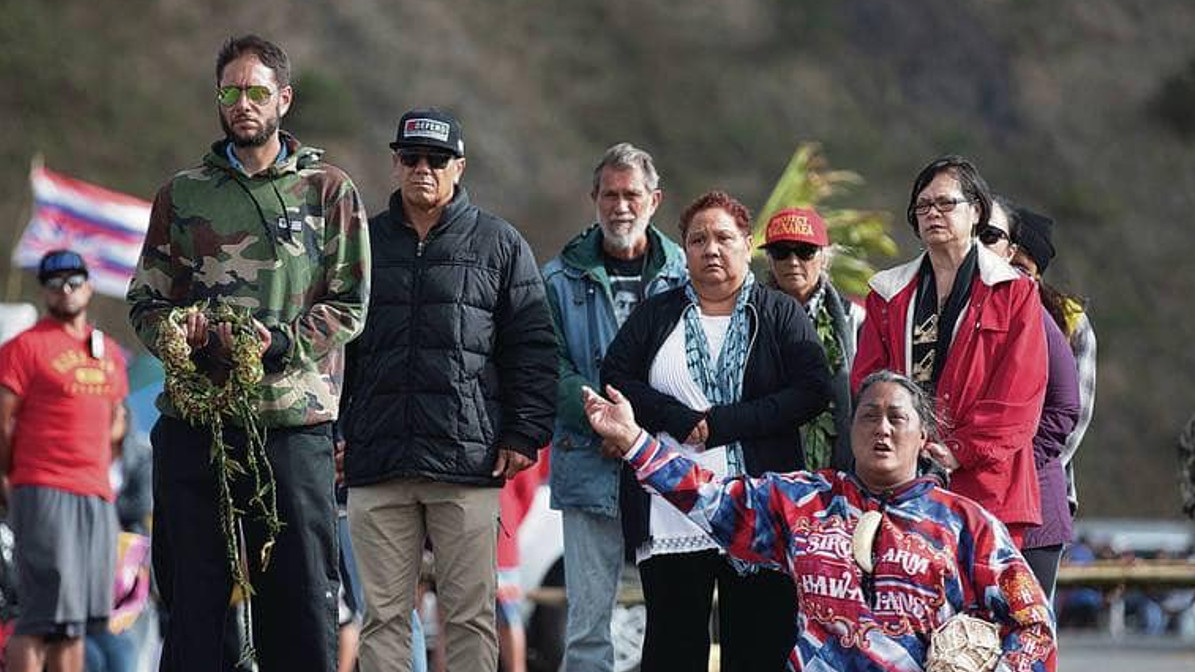 HAWAII ISLAND - The Office of Hawaiian Affairs will hold a community meeting in Pahala on Wednesday evening. The next day they will meet in Hilo and visit Puʻuhuluhulu.

(BIVN) – Hawaiʻi Island residents will have another chance to share their thoughts with the Office of Hawaiian Affairs at a community forum and a regular meeting of the OHA Board of Trustees, set for later this week.

On Wednesday (Sept. 18), a community meeting will be held at 6 p.m. at the Pāhala Community Center in Kaʻū.

The Board of Trustees will then hold a regular meeting on Thursday (Sept. 19) at 9 a.m. at Aunty Sally Kaleohano’s Lūʻau Hale in Hilo.

The Hilo meeting will be followed by a 3 p.m. site visit to Puʻuhonua o Puʻuhuluhulu and the Maunakea Access Road, the site of the ongoing standoff over the Thirty Meter Telescope project.

The community forum is specifically designed for OHA officials to listen to the manaʻo of the public and highlight the agency’s efforts to improve the conditions of Native Hawaiians. The board meeting is intended to conduct regular board business. The OHA Board will also visit Puʻuhonua o Puʻuhuluhulu at the base of Maunakea. Both meetings and the site visit are open to the public.

The regular meeting in Hilo will include an informational briefing by Robert Agres on the County of Hawai’i Kilauea Eruption Recovery Process and the work of the Puna Community Development Plan Action Committee.

Trustee Dan Ahuna, who has been supportive of the kiaʻi standing opposed to TMT, wrote a letter to OHA Chair Colette Machado on September 10, asking that she and the other trustees consider putting the issue on the agenda.

“I am writing out of grave concern for what has transpired in recent days as the tension around the Maunakea effort again has reached a fever pitch,” Ahuna wrote. “As we prepare for a Board meeting in Hilo on Thursday, Sept. 19th, it is likely we will hear countless testimonies from impassioned beneficiaries. For this reason, I request that the TMT project be put on the agenda so that this board may once again, consider its position on the project. Circumstances have changed drastically from 2015 when we last took a vote, and we are compelled to consider further action regarding this project specifically as it has caused a pinnacle moment of conflict and uprising for our lāhui.”

Furthermore, OHA filed a lawsuit in 2017 over the mismanagement of Maunakea. A lawsuit that was finally filed after years of being ignored by this administration, by UH, and by the DLNR as we tried to identify pathways that would avoid the very conflict we are witnessing now. That lawsuit is pending and the TMT, UH, and the Ige Administration continue to ignore our voices as we have asked for a halt to the construction of TMT while awaiting a resolution. It is time for cooler heads to intervene.

These factors are ultimately triggered by the TMT who has remained silent while taxpayer dollars are spent by the millions on ramped up law enforcement, our beneficiaries subjected to disrespect and mental anguish, their voices ignored, and now we learn there may be well connected business interests at play.

All of these issues point back to a lack of leadership by this Governor, by the University, and by the TMT. They have all failed. They ignored and denied every opportunity to meaningfully engage with OHA and our community. Their resolve now is to continue to threaten and intimidate our beneficiaries. It is appalling.

It is time for OHA to be a leader. I am requesting that the TMT project be put on our Board of Trustees agenda at the earliest date possible. We must try to find a collective voice amongst Trustees on this matter and determine what legal mechanisms we may use to put an end to the miserable attempts by this State to continue to push this project forward. Chair Machado, you and I called for a halt on construction when the Govemor imprudently declared a State of Emergency in July. At least one State legislator and Hawaii Island County Councilmembers have called for a moratorium on the TMT. It is time that OHA‘s Board and other Hawaiian organizations consider taking similar steps collectively and we should use the platform of our Board meeting to openly discuss this.

As of September 16, the divisive issue does not appear on the September 19 agenda. However, there is time allotted for the community to express concerns.