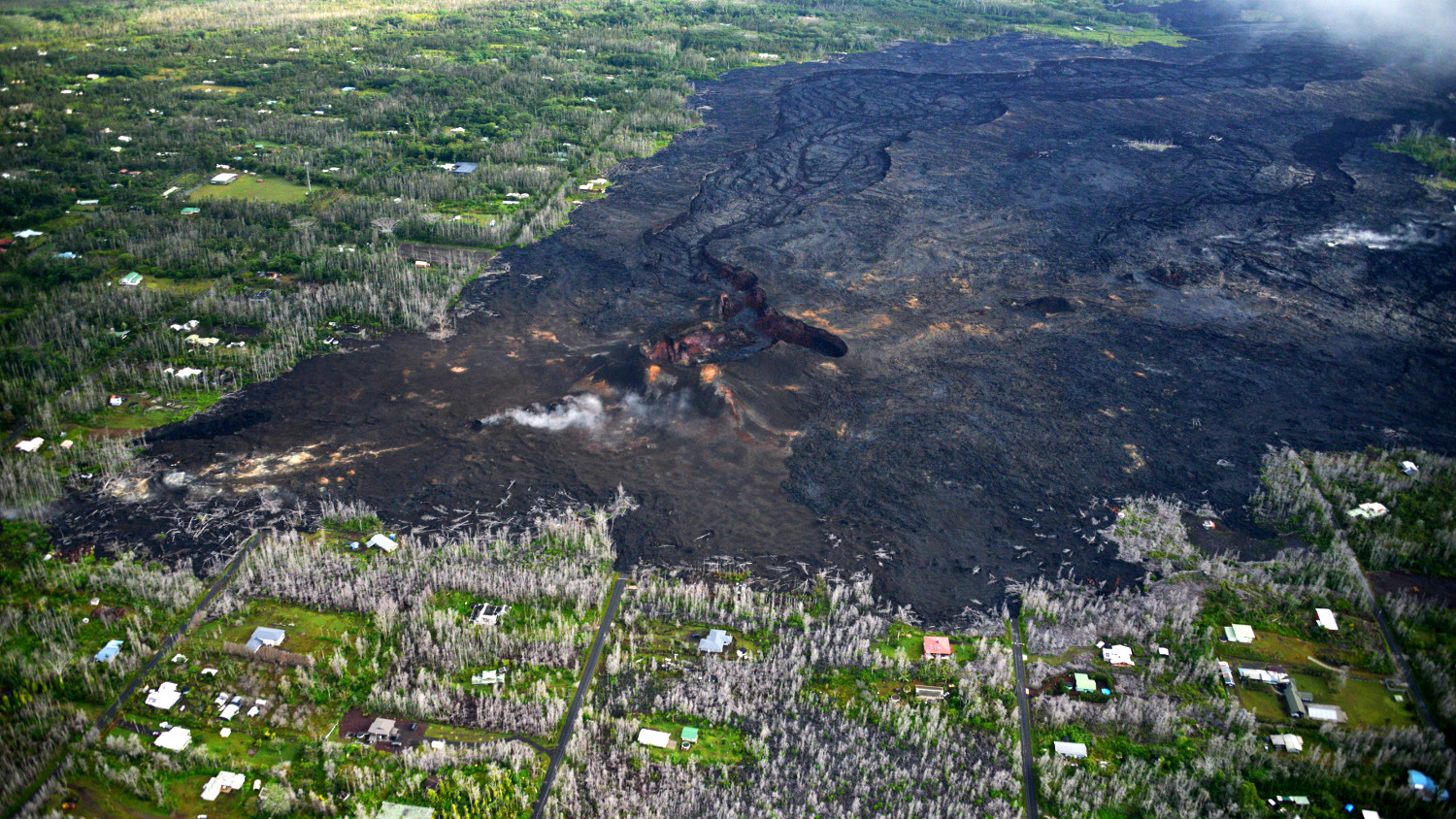 An August 2019 view looking north of Leilani Estates subdivision, with the fissure 8 vent near the center of the photo. USGS photo by D. Becker.

(BIVN) – The Hawaiʻi Congressional Delegation has sent a fourth letter to the U.S. Department of Agriculture, again asking for relief for farmers and agricultural producers who were uniquely affected by the 2018 Kīlauea eruption.

“Unlike farmers impacted by floods and wildfires, Hawaii producers faced unique losses – including permanent loss of land – due to lava inundation,” a joint media release said. “In their letter to USDA, the Hawaii Congressional Delegation emphasized that while current support programs like the Wildfire and Hurricane Indemnity Program Plus (WHIP+) are well-tailored for victims of other natural disasters, they do not provide adequate relief for victims of volcanic eruptions.”

Secretary Perdue saw the impacts of the eruption, first hand, when he visited Puna in December 2018. The Secretary also sat and talked with local farmers, which was recorded by BIVN:

Hawaii experienced multiple presidentially declared natural disasters in 2018, one of which was the Kilauea eruption. This eruption was the most destructive volcanic eruption that the United States has experienced in over 30 years. It destroyed homes, roads, farms, and entire communities on Hawaii Island. We appreciate that you were able to experience the extent of this destruction and hear personally from our impacted farmers when you visited Hawaii Island in December 2018. That personal engagement meant a great deal to our farmers, and we are hopeful that this firsthand experience illustrated that volcanic eruptions are unique in that lava does not afford impacted individuals the ability to return to the land afterwards, unlike floods, hurricanes, wildfires, etc.

Since the disaster, we have sought to work with USDA to address the ongoing concerns of our lava-impacted farmers. Specifically, our Congressional delegation has written to USDA on three separate occasions requesting the agency’s flexibility in helping our impacted farmers recover from this devastation. We have been disappointed with the responses to date.

In June 2018 we sent a letter to Undersecretary Northey bringing attention to the losses resulting from natural disasters in Hawaii and requesting the maximum assistance practicable, including flexibility with insurance sign up and the Emergency Conservation Program. We never received a formal response to that letter.

Finally, we wrote following your December 2018 visit requesting that USDA work with us in utilizing existing authorities beyond the standard disaster programs to help our impacted producers. Your response was that “Congress is considering legislation that would provide funds for assistance related to losses of crops caused by hurricanes, volcanic activity, or wildfires occurring in calendar year 2018. If legislation is enacted into law, USDA will work as expeditiously as possible to provide authorized assistance.”

After a months-long delay, Congress enacted legislation that was signed into law by the President in June 2019. As a result, USDA created the Wildfire and Hurricane Indemnity Program Plus (WHIP+). We appreciate the work that has gone into designing and executing this program, however we are disappointed that the payment limitation is capped at a maximum of $250,000 per producer, assuming they meet the income eligibility requirements. To compare, the 2017 WHIP program had a payment limitation of $900,000 per producer. While we understand that USDA was appropriated $3 billion to execute this national program and is expecting a large number of impacted producers to sign up, these payments will fall extremely short of providing adequate relief for some of our most impacted producers that lost land, infrastructure, and inventory. We urge you to reconsider this threshold, particularly based on the unique nature of Hawaii Island’s ongoing recovery needs.

We understand that you have to consider the entire country when making policy. However, we cannot impress upon you enough the unique nature of the losses experienced by our producers impacted by the volcanic eruption. While USDA’s existing disaster assistance programs and WHIP+ provide adequate relief for victims of natural disasters such as drought, flooding, wildfires, and hurricanes, they do not provide adequate relief for victims of volcanic eruptions. This inadequacy is understandable given the infrequency of devastating volcanic eruptions in the United States. However, we urge the USDA to acknowledge the unique circumstances surrounding the impacts that the eruption has had on our producers to date. As such, we request that USDA make an exception and work with us and our Hawaii producers to provide unique assistance to farmers that were impacted by a truly unique disaster.