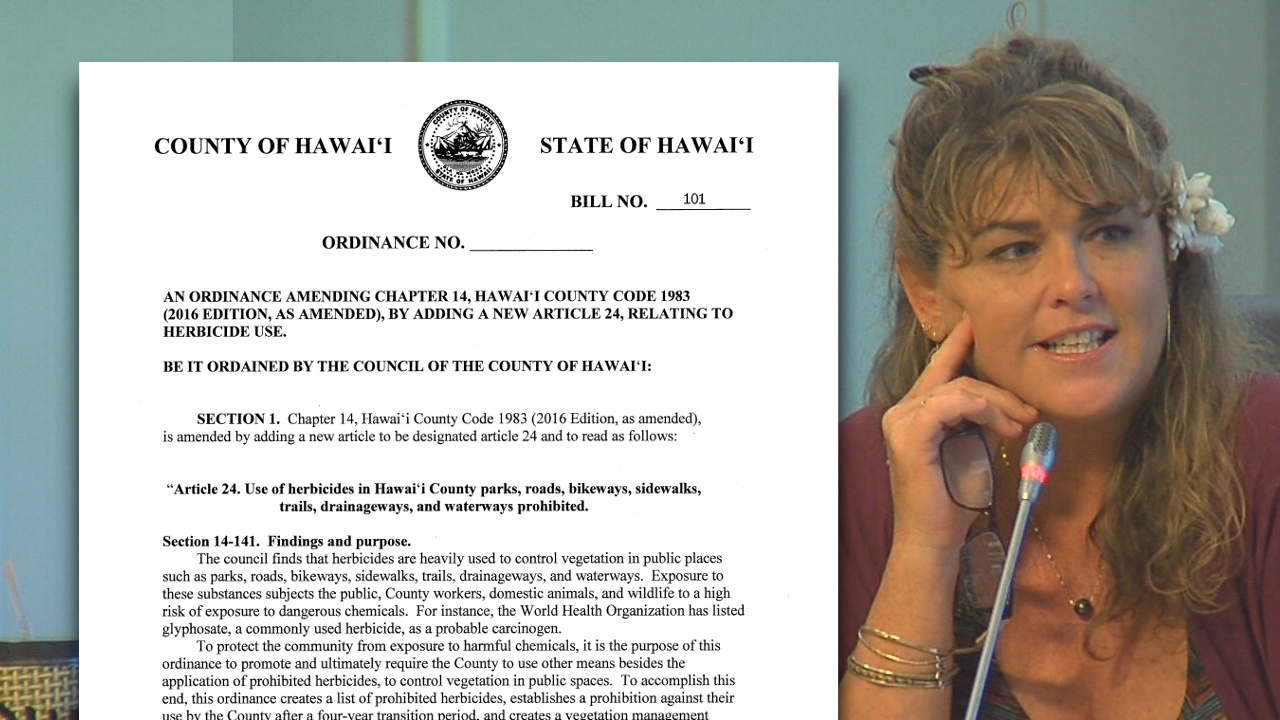 Bill Proposes To End Herbicide Use By Hawaii County

(BIVN) – The County of Hawaiʻi will no longer use herbicides to maintain parks and roads, if a new bill is approved by the Hawaiʻi County Council.

If the bill is passed, the list of prohibited herbicides will include glyphosate, the active ingredient found in Roundup Pro. It will also prohibit County use of several other products as well, like Atrazine, Ronstar, and Dual II Magnum.

According to the bill’s “Findings and Purpose” section:

The council finds that herbicides are heavily used to control vegetation in public places such as parks, roads, bikeways, sidewalks, trails, drainageways, and waterways. Exposure to these substances subjects the public, County workers, domestic animals, and wildlife to a high risk of exposure to dangerous chemicals. For instance, the World Health Organization has listed glyphosate, a commonly used herbicide, as a probable carcinogen.

It is not the purpose of this ordinance to affect the use of prohibited herbicides by persons or entities other than the County.

The bill will not stop leaseholders of County agricultural land, who are not employees of the County, from using the herbicides on the leased land.

The bill calls for a transition period from January 2020 to December 2023, and will involved the creation of a seven-member vegetation management transition committee. The committee will monitor progress of the County in reducing its use of prohibited herbicides.

In June, Councilwoman Villegas arranged a meeting between County department heads and Dewayne “Lee” Johnson, the California groundskeeper who took Monsanto/Bayer to court after says he developed cancer from exposure to the product Round Up. He was awarded $300 million in damages.

“My hope for today is to provide the information, the inspiration, and the opportunity for collaboration amongst County of Hawaii departments to support a transition away from the use of pesticides and herbicides,” Villegas said in a media release at the time of the meeting.

Villegas is also requesting approximately an hour for a presentation and discussion with Beyond Pesticides during an October 15 committee meeting. In her request, Villegas says Autumn Ness, Program Director of Beyond Pesticides, “will be supplying information on herbicide use and the alternate means that can be considered to replace herbicide usage in public areas.”