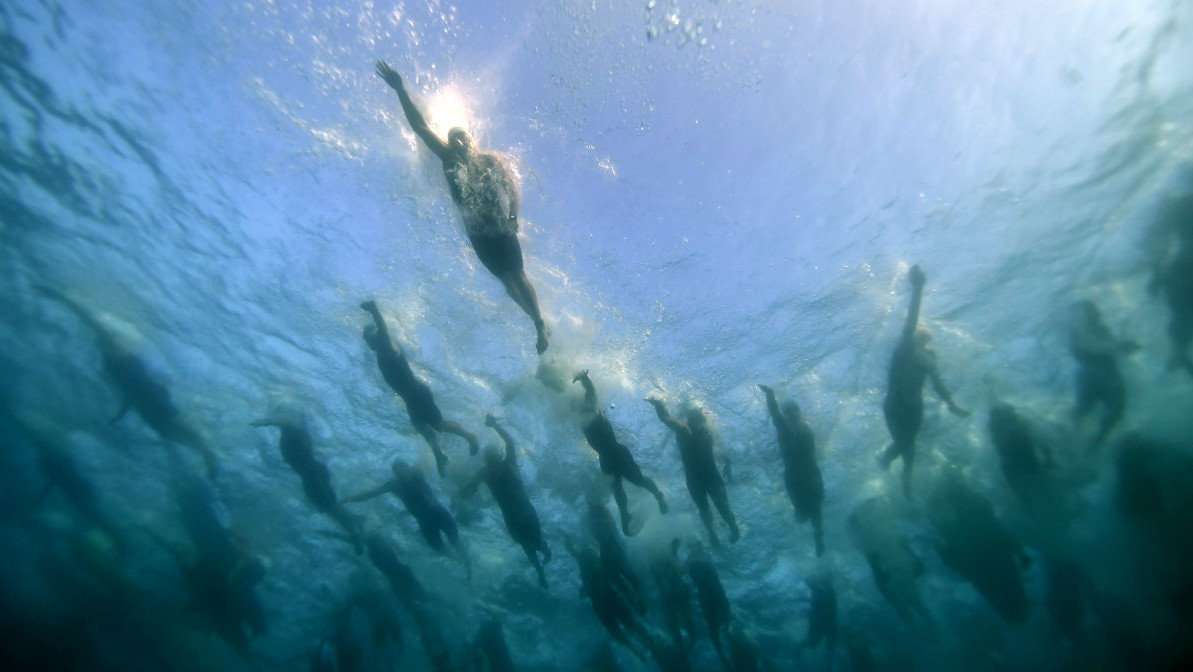 Athletes school like fish as they begin their 2.4-mile swim as part of the 2017 IRONMAN World Championship in Kailua-Kona, Hawaiʻi (Photo by Donald Miralle/IRONMAN)

(BIVN) – There are some changes in store for this year’s Kona IRONMAN World Championship, set to race around the north-half of West Hawaiʻi on Saturday.

In June, the IRONMAN announced a new swim start protocol that will be implemented in this year’s championship race:

For the first time, the world championship event will utilize a wave start that separates the field into 11 groups. Like in previous years, the professional men’s field will start at 6:25 a.m., followed by the professional women’s field at 6:30 a.m. The PC/Open Exhibition and Handcycle divisions will then begin their day at 6:35 a.m. The first age group wave will start at 6:55 a.m. and continue every 5 minutes until all athletes are in the water.

“The swim start change is a reflection of, and reaction to, the extraordinary ability of our IRONMAN World Championship athletes,” said Andrew Messick, President & CEO of The IRONMAN Group. “While we appreciate the simplicity and iconic visual of the mass start, our primary responsibility is to create a fair race for all athletes. A single start each for age-group men and age-group women creates too much density on the bike course.”

The decision to move to an extended wave start was made following a comprehensive analysis of athlete data with the goal of reducing peak athlete density flowing onto the bike course. The new start times will not change the existing cut off standards for the IRONMAN World Championship – 2:20 for the swim and 10:30 for the bike. Athletes will also still have to reach the finish line within 17 hours to be official finishers of the race.

“We are always looking for ways to improve the quality of our events in an effort to create a fair, safe and world-class experience for our competitors who work so hard to get to this start line,” said Diana Bertsch, Senior Vice President of World Championship Events of The IRONMAN Group. “The IRONMAN World Championship is the pinnacle of endurance racing and our belief is that this change will allow for the highest competition to occur while enhancing the quality of the race.” 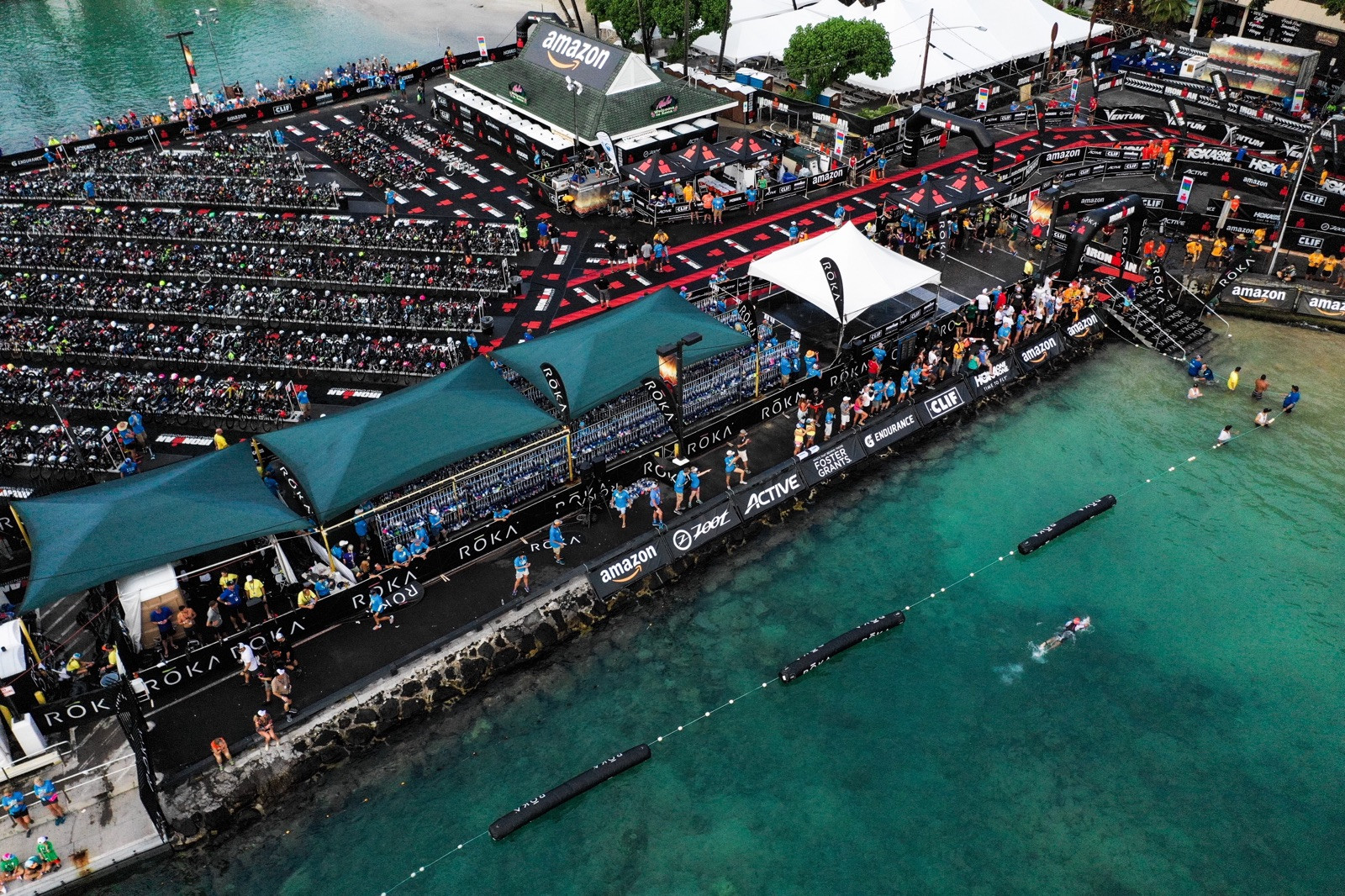 GAPPING THE FIELD: Great Britain’s Lucy Charles demonstrated her pedigree in the water and showed her intent at the 2018 IRONMAN World Championship brought to you by Amazon by delivering a new best time in the 2.4-mile swim leg. The 25-year-old, who exited the Pacific Ocean in a time of just 48:13, smashed the previous best of Jodi Jackson (USA) by 30 seconds. Her final few meters in the sea were captured perfectly by this aerial photo (Photo by Donald Miralle/IRONMAN)

In September, the IRONMAN dubbed one of those swim waves the “Kukui”. A media release explained more:

IRONMAN, a Wanda Sports Group company, announced today the creation of the “Kukui” Swim Wave for the 2019 Vega IRONMAN World Championship® which takes place on Saturday, Oct. 12, 2019. The Hawaiian Kukui is a candlenut tree that symbolizes enlightenment and its name will now represent Legacy and Wild Card athletes. Like the kukui, these athletes represent enlightenment through their determined and inspirational journeys to the Vega IRONMAN World Championship start line. Their stories of perseverance and their ability to overcome challenges serve to motivate and inspire us all to remain steadfast as one pursues their dream. The Kukui has many uses in Hawaiian culture and due to its symbolic value and importance became the official state tree of Hawai`i in 1959.

Earlier this year, a new swim start protocol utilizing waves that separates the field into 11 groups was announced for the Vega IRONMAN World Championship. After a comprehensive analysis of athlete data, the change was made with the goal of reducing peak athlete density flowing onto the bike course. The creation of the Kukui Wave will further assist this goal, providing Kona Qualified athletes with swim waves devoted to age-group divisional competition. The new start times will not change the existing cut off standards for the Vega IRONMAN World Championship – 2 hours and 20 minutes for the swim and 10 hours and 30 minutes for the bike. Athletes are also required to reach the finish line within 17 hours to be official finishers of the race. 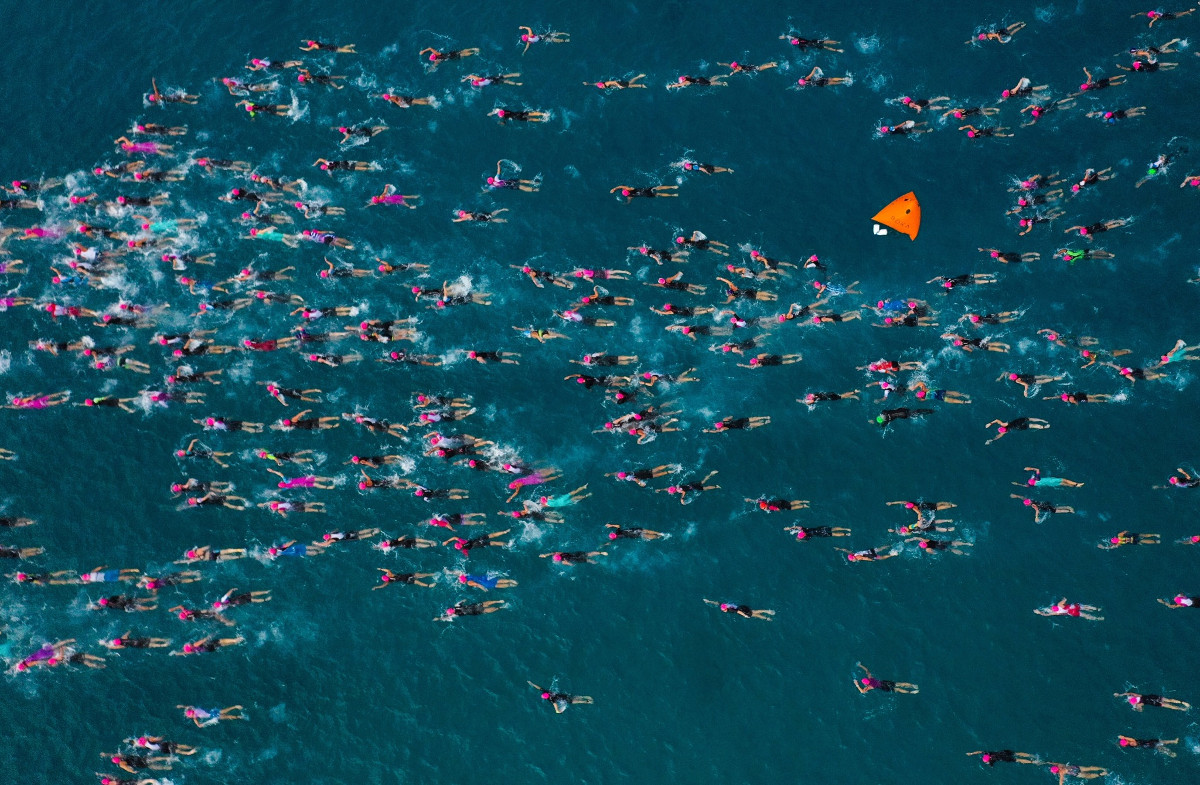 THE LADIES ARE A GO: The female age group athletes got underway in clear blue waters of the Pacific Ocean at the 2018 IRONMAN World Championship brought to you by Amazon (Photo by Donald Miralle/IRONMAN)

Ali’i Drive downtown will close north of Gertrude’s Jazz Bar on Thursday morning, Oct. 10, at 7:30 a.m., and the race itself will close roads up to Hawi as 2500 athletes complete.

The County of Hawaiʻi says the road closures for the Ironman means the following facilities and services will not be open on Saturday: