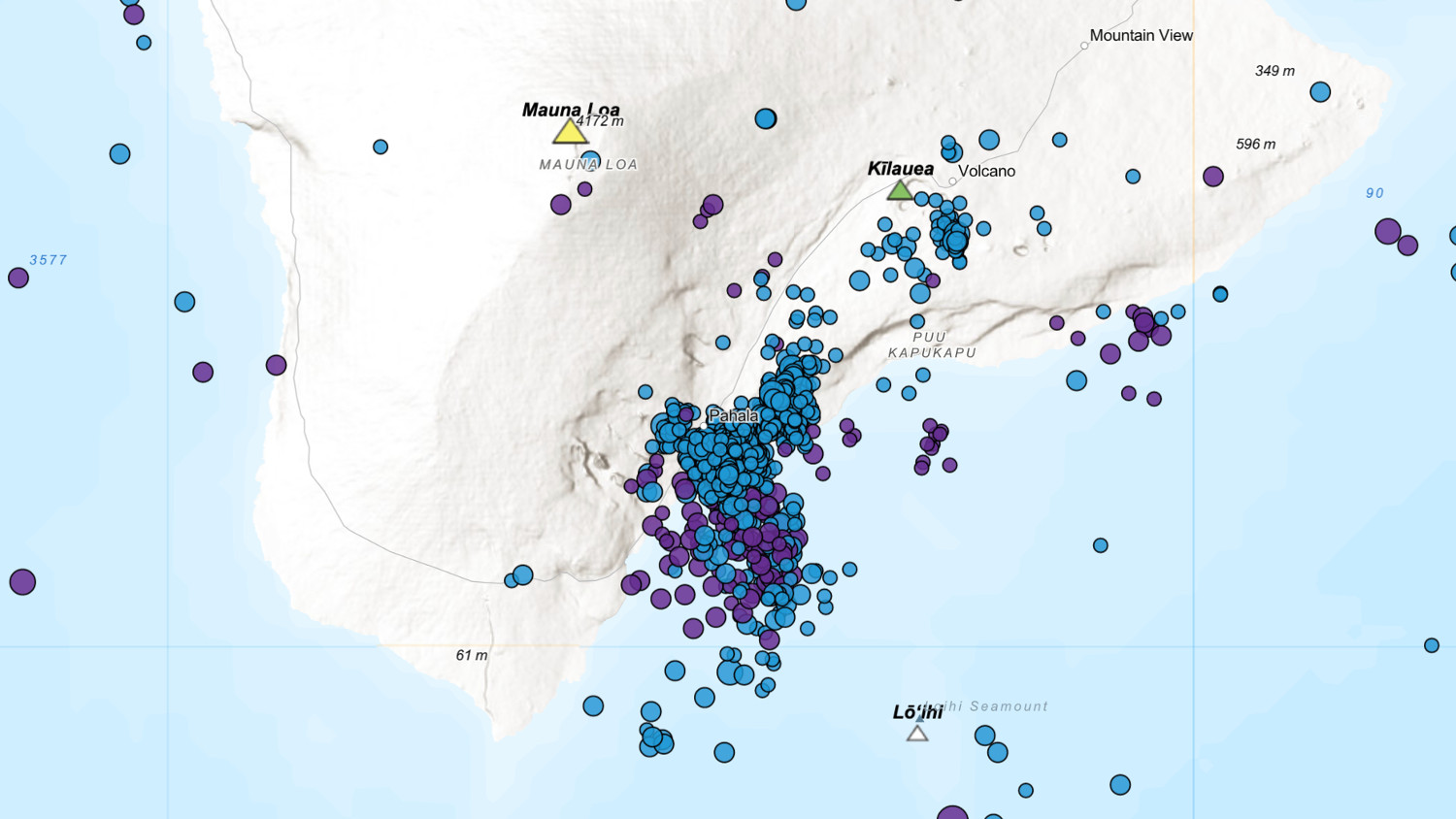 Inset of USGS map by Brian Shiro showing the earthquakes clustered beneath the southern edge of Hawaiʻi Island near the town of Pāhala.

PĀHALA, Hawaiʻi - Numerous earthquakes on Kīlauea's lower Southwest Rift Zone have been detected, deep below Pāhala at 15 to 20 miles below the surface. 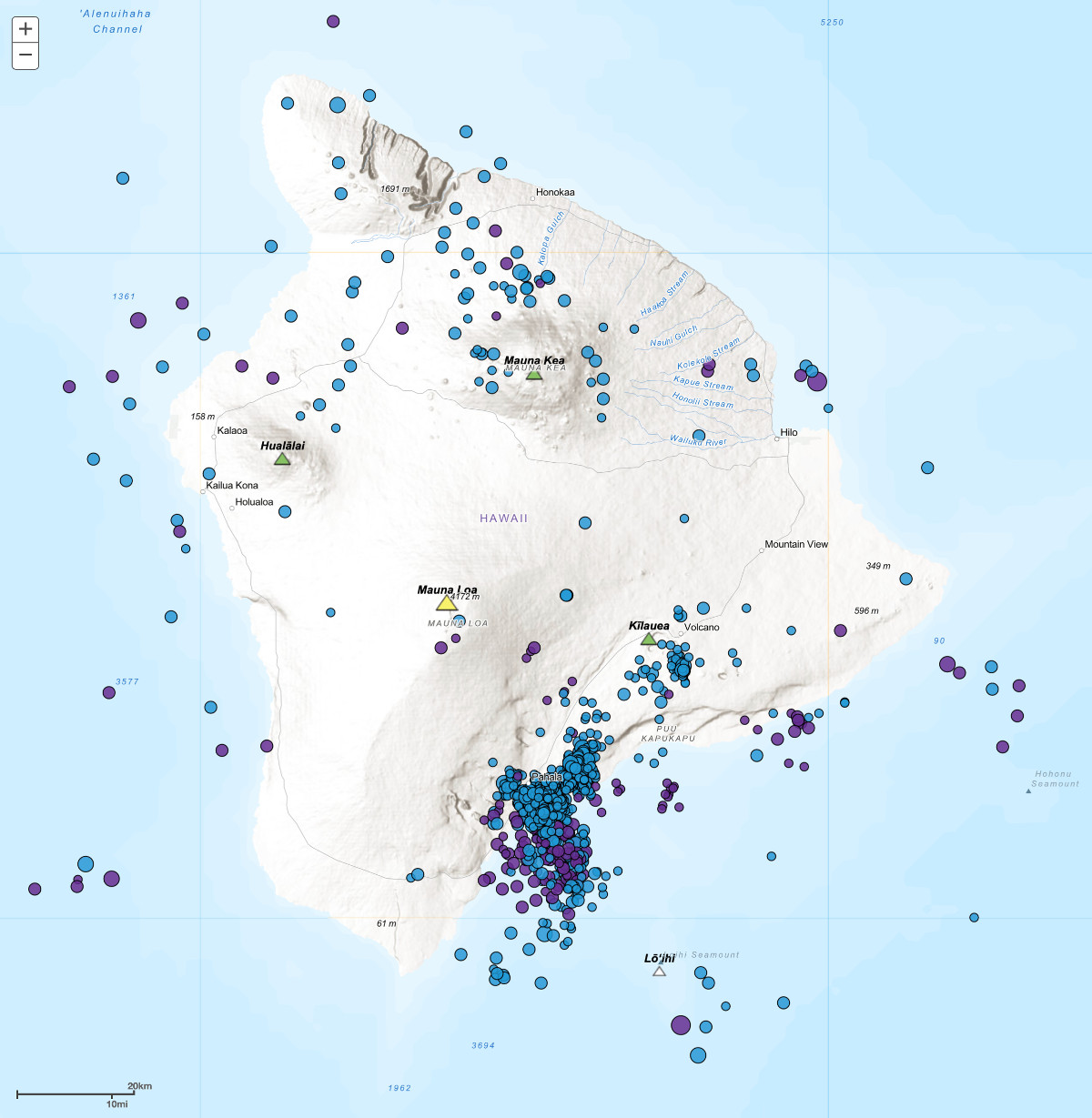 About 1300 earthquakes with magnitudes greater than 1 and at depths over 20 km (12 mi) on and around the Island of Hawaiʻi since August 2019 are depicted on this map. Most of the earthquakes were clustered beneath the southern edge of the island near the town of Pāhala. Blue and purple dots indicate earthquakes at 20-40 km (12-25 mi) and more than 40 km (25 mi) depths, respectively. USGS map by B. Shiro.

(BIVN) – An examination of a map showing seismicity on Hawaiʻi Island will reveal a cluster of activity surrounding the Kaʻū town of Pāhala. In this week’s Volcano Watch article, USGS Hawaiian Volcano Observatory geophysicist Brian Shiro delves into what scientists know about the activity.

Why do so many deep earthquakes happen around Pāhala?

The USGS Hawaiian Volcano Observatory (HVO) detects tens of thousands of earthquakes each year. Currently, one of the most active areas of seismicity is Kīlauea’s lower Southwest Rift Zone. This area produces numerous deep earthquakes, mostly at depths of 25-40 km (15-25 mi), beneath the town of Pāhala and extending about 10 km (6 mi) offshore.

Since the beginning of a recent earthquake swarm in August 2019, HVO has recorded over 1000 deep earthquakes in this region, which accounts for about 15 percent of all earthquakes detected on the Island of Hawai‘i during that time. The largest of these was a magnitude-4.0 earthquake on October 8 that was weakly felt by residents.

In fact, 34 deep events have been reported felt in the region since 2006, including a magnitude-4.7 earthquake in January of that year. The uptick in seismicity in recent months is the latest chapter in a decades-long history of observed earthquakes in the area.

This persistent source of seismicity was first identified on seismic records by HVO staff at least as far back as the 1960s. They characterized episodes of harmonic tremor, ascribing it to upwelling of magma within fluid-filled cracks deep beneath the island. Given the region’s location about 40 km (25 mi) from Kīlauea’s summit and about 50 km (31 mi) from Mauna Loa’s summit, it was unclear how magma in this deep region might relate to surface volcanism, if at all.

As HVO’s seismic monitoring network has improved over the years, our ability to detect different types of seismicity has increased. For example, a USGS study published in 2006 characterized earthquakes in the region in addition to tremor.

Noticing that the earthquakes tend to occur shallower than the tremor, the authors proposed that a mineralogical transition in Earth’s mantle at 32 km (20 mi) depth could enable a magma transport path to Kīlauea. They also noticed that the earthquake depths tend to become somewhat shallower in the direction of Mauna Loa’s summit, suggesting a magma transport path from this region may also feed Mauna Loa.

A seismic experiment in the mid-2000s called “PLUME” (Plume-Lithosphere Undersea Mantle Experiment) utilized seismic waves recorded by land and ocean-bottom seismometers to peer deep beneath the island in a manner similar to how a CAT scan images the human body. Using this data, researchers in 2011 discovered a broad zone of low seismic velocity down to at least 1000 km (620 mi) beneath the southern portion of the island where the deep seismicity takes place. They interpreted it as the location where the hot spot that created our island chain currently rises beneath Hawai’i. This observation supported the earlier hypothesis that the area of deep seismicity likely indicates the magma source that feeds the active volcanoes.

Using other modern computer algorithms to pore through seismic data traces, USGS researchers in 2015 characterized three main types of earthquakes in this region, including both short and long period earthquakes in addition to tremor. They interpreted the seismicity to be at the top of a deep magma body that leads to a deep fault zone, which may indicate a magma transport pathway feeding Kīlauea.

Since late 2015, HVO has recorded an elevated level of seismicity in the region deep under Pāhala. The currently observed rates are typically 10-20 events per day, but sometimes exceed 40 per day. Only swarms in 1972 and 1975 have exceeded this rate.

Seismic activity beneath Pāhala provides a window into the deep magma pathways under the island. Scientists continue to study this enigmatic region to better understand the processes that feed Hawaii’s volcanoes.

While these deeper earthquakes, in their own right, do not likely pose a strong hazard, shallow crustal earthquakes in this geographic area have sometimes been damaging, including the 1868 magnitude-7.9 Great Kaʻū earthquake and its many aftershocks. 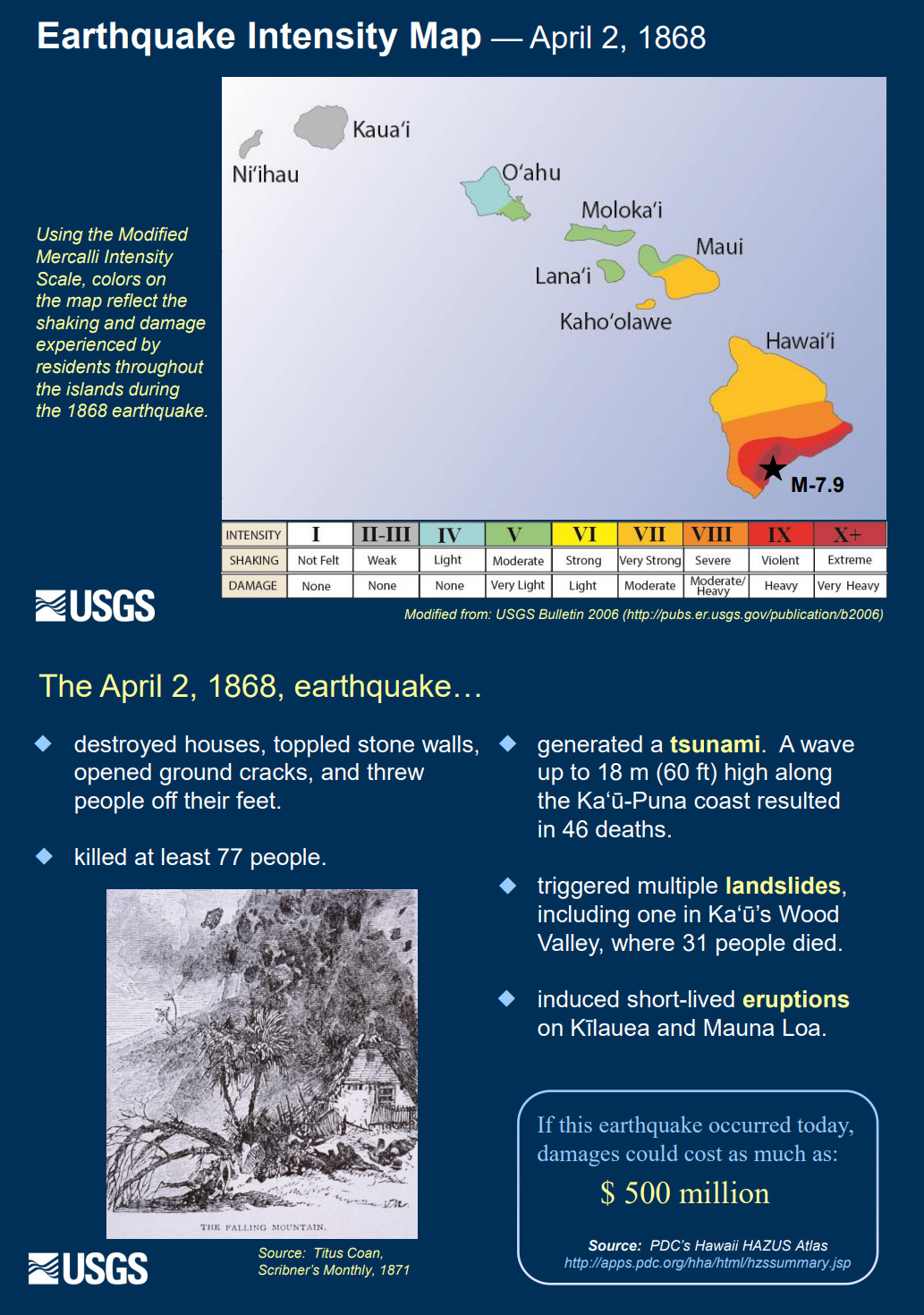 from USGS HVO “Earthquakes in Hawaii: What you need to know”

HVO encourages all Hawaiʻi residents to practice good earthquake safety and preparedness by participating in the annual Great Hawaii ShakeOut on October 17 or on whatever day works for you. Remembering to “Drop, Cover, and Hold on” when you feel strong shaking is the best way to protect yourself during an earthquake. Learn more here.