HAWAIʻI VOLCANOES NATIONAL PARK - Scientists have produced a new video talking about how they are keeping a close eye on the water pond at the bottom of Halemaʻumaʻu. 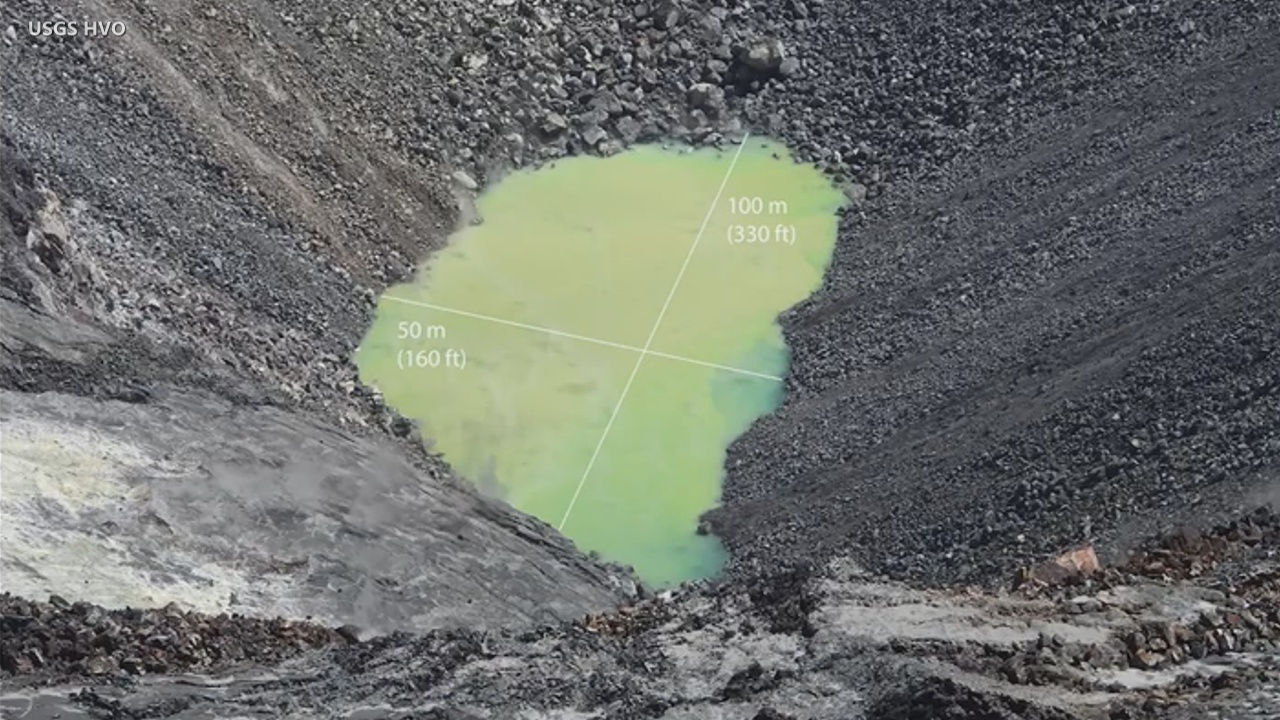 NOTE: This is part one of a two part series featuring a recent video produced by the USGS Hawaiian Volcano Observatory about the new water pond at the summit of Kīlauea. Big Island Video News is presenting the content in two parts. The first features geologist Matt Patrick. The second part will feature geophysicist Jim Kauahikaua. There has been some alteration to the presentation of the video but the content remains the same.

(BIVN) – Here is a transcript of what USGS HVO geologist Matt Patrick presented in the video:

In 2018, the largest Lower East Rift Zone eruption and summit collapses in 200 years resulted in drastic changes on Kīlauea Volcano. At the summit more than 60 collapse events caused the floor of Halemaʻumaʻu crater within the caldera to drop more than 500 meters. That is 1,600 feet.

In July 2019, yet another change occurred at the summit. Water appeared at the bottom of Halemaʻumaʻu.

The pond was first observed on July 25th, 2019 and at that time it was difficult to see. Luckily, the aerial survey that was going on had very high-resolution images that were used to confirm that this small puddle was was actually there.

The pond was very small. It was about 10 meters wide, or about 33 feet across, and very shallow.

The pond has been present for two months, now. The water level has slowly risen and today the water pond is is about a hundred meters long, a bit over 300 feet in the east-west dimension, and about 50 meters kind of in the north/south dimension, or about 150 feet or so. That’s about the size of a football field. So, it’s pretty big size and pretty big change over, you know, a relatively short period of time.

We’ve been tracking this water level rise very closely on a near daily basis. What we see is that the rise rate is relatively steady. It’s about 6 inches per day. The total depth of the pond is approaching 10 meters or so, a little over 30 feet deep.

High resolution videos show the circulation and mixing, but what you can see in these circulation videos is what looks like clearer, fresher water that’s coming in from the south margin, kind of upwelling and mixing in to the pond.

One other common feature on the pond is is the steam. We see that as another testament to the fact that the pond is scalding hot.

It’s a dynamic time at Kilauea summit right now, so we’re keeping a close eye on the water pond to look for any possible changes. We’re doing that through a number of means.

First of all, we have a webcam that we set up on the west caldera rim. We’re also going on a near daily basis on foot to make direct observation. One of the most important things that we do is take measurements, with a laser rangefinder, of the water level. We’ll walk out a short distance to the west caldera rim, we’ll set up a tripod and set up our laser rangefinder, and make a number of measurements of the water level.

It’s important to keep in mind that the distance. We’re pretty far away, we’re about 2,000 feet above the water pond. The temperature, based on the thermal camera measurements of the water surface, is about 70 degrees Celsius, or about 160 degrees Fahrenheit. And that’s telling us that the water is heated by the magmatic system from depth. One thing that we’ve noticed through tracking is that that water temperature has been very stable.

We also rely on visual observations, taking high-resolution photographs. We’re also monitoring on regular overflights and that gives us a view of portions of the pond that we can’t necessarily see from the ground. In addition to that visual monitoring, and the field measurements, and the thermal monitoring, we have our extensive network of geophysical and geodetic and geochemistry monitoring tools that are situated at the summit. Kīlauea is one of the best monitored volcanoes on Earth, and the summit network is particularly dense. So there’s a really close, continuous view of what’s going on there.

The next step in monitoring the pond and its potential hazards is really taking a direct sample of the water to look at the chemistry. Being able to put a constraint on how much sulphur the pond is actually absorbing. It would be very useful for monitoring.

At other volcanic lakes, changes in lake chemistry can sometimes be a precursor to changes on the volcano and changes deeper in the magmatic system, so being able to take direct measurements and track the chemistry of the pond is really a fundamental part of monitoring.

We’re working with Hawaiʻi Volcanoes National Park to look at the feasibility of how we’re going to collect that sample. It’s not an easy thing to do. It’s challenging a location. The pond is very deep in the crater.

At Kīlauea, or any other volcano, whenever you have magma interacting with water, there is the potential for explosive activity. At Kilauea summit, most likely those explosions would be relatively small, affecting just the immediate caldera floor.

The pond is very new. Definitely, in the past 200 years, we haven’t seen activity like this. So we’re keeping a close eye on this and really looking for any kind of signs that might be potential precursors for larger scale activity in the future. Inflation that would indicate magma rising, or seismic activity that would indicate unrest in the deeper magmatic system. It is possible – and this has happened at other volcanic lakes – that small explosions have occurred with little or no warning. But again, those are most likely events that would just impact the immediate caldera area.

The takeaway right now is that there’s no immediate signs of imminent, increased hazard at the summit. Sulfur dioxide emission rates are low and seismicity is elevated relative to the levels before the 2018 eruption, but it’s stable. Looking at all the indicators, it paints a relatively stable picture at the summit, and we’re continuing to keep a very close eye on all of those indicators to see any hint of change in the future that might be a precursor to two more hazardous activity.