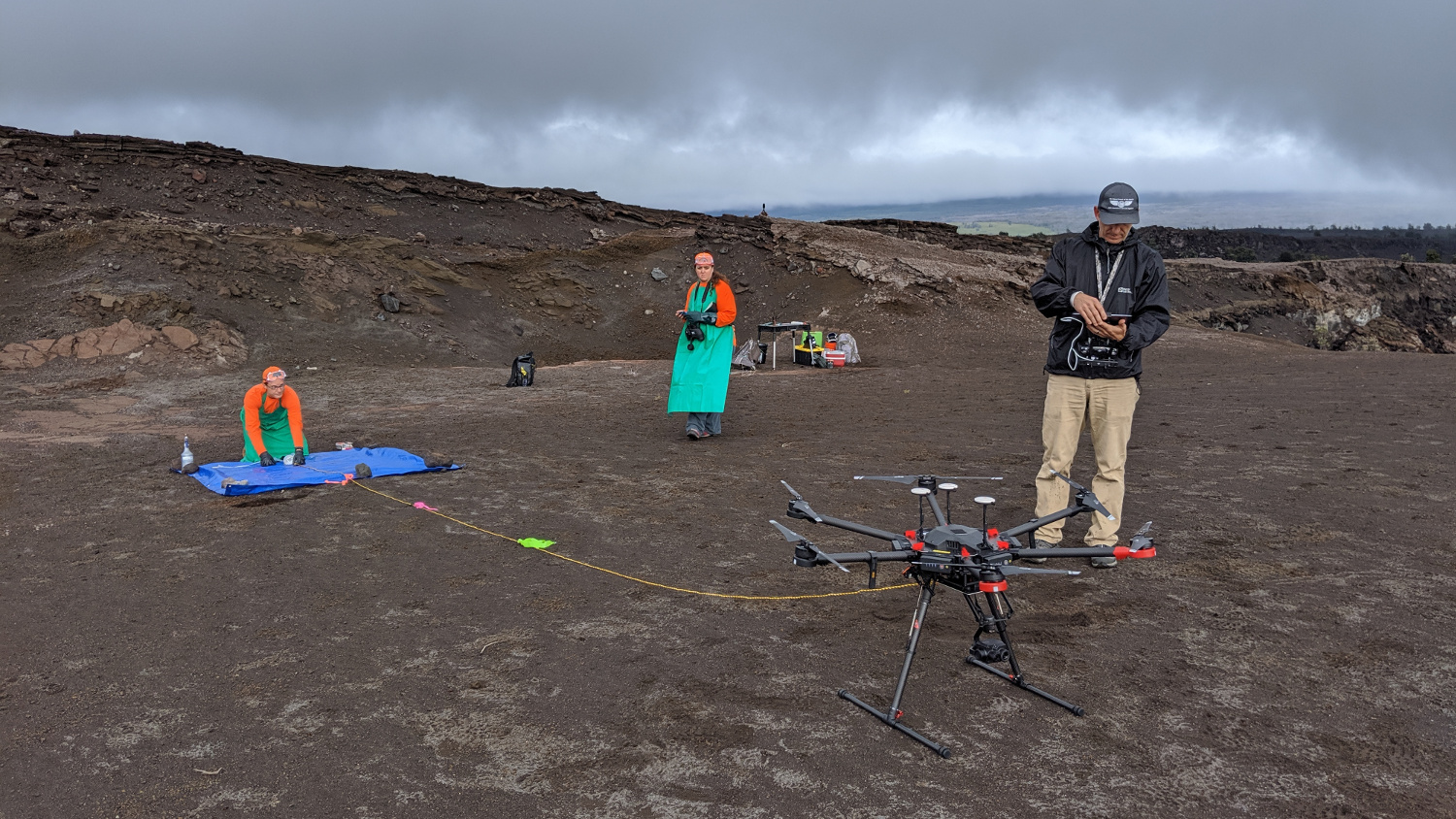 Water collected from the lake at the bottom of Halema‘uma‘u is prepared for laboratory analyses at the USGS California Volcano Observatory. Results thus far reveal chemistry indicative of complex reactions between the water, magmatic gases, and Kīlauea’s basaltic rocks. (USGS photo by S. Peek, October 2019.)

HAWAIʻI VOLCANOES NATIONAL PARK - In this week's article, scientists are pondering the pond at the bottom of Halemaʻumaʻu, now that a chemical analysis has been done. 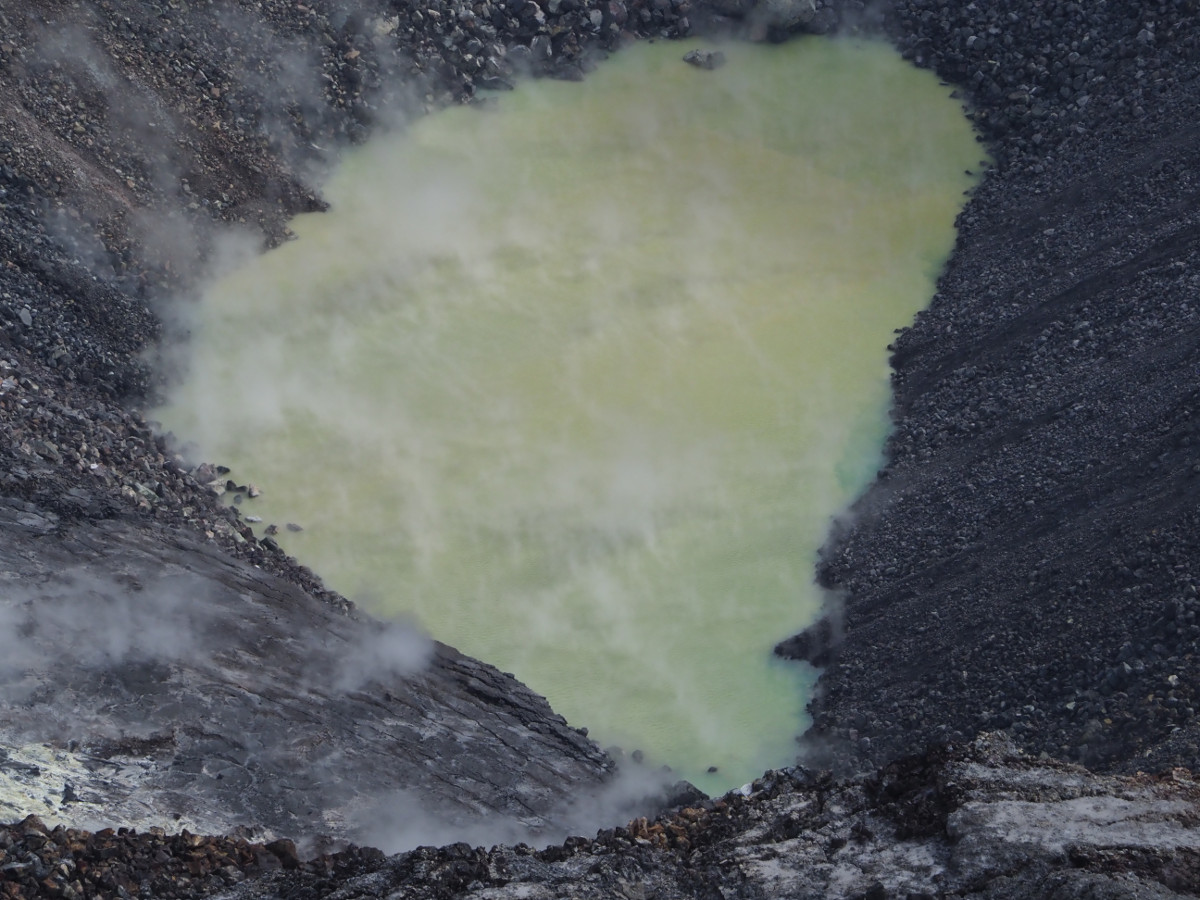 The water level at Kīlauea summit continues to slowly rise, with the size of the pond gradually enlarging. (USGS photo by D. Swanson.)

(BIVN) – The water pond at the bottom of Halemaʻumaʻu continues to slowly expand and deepen, while Kīlauea Volcano remains quiet.

This week’s Volcano Watch article, written by U.S. Geological Survey Hawaiian Volcano Observatory scientists and affiliates, examines what is known about the chemistry of the new crater lake. 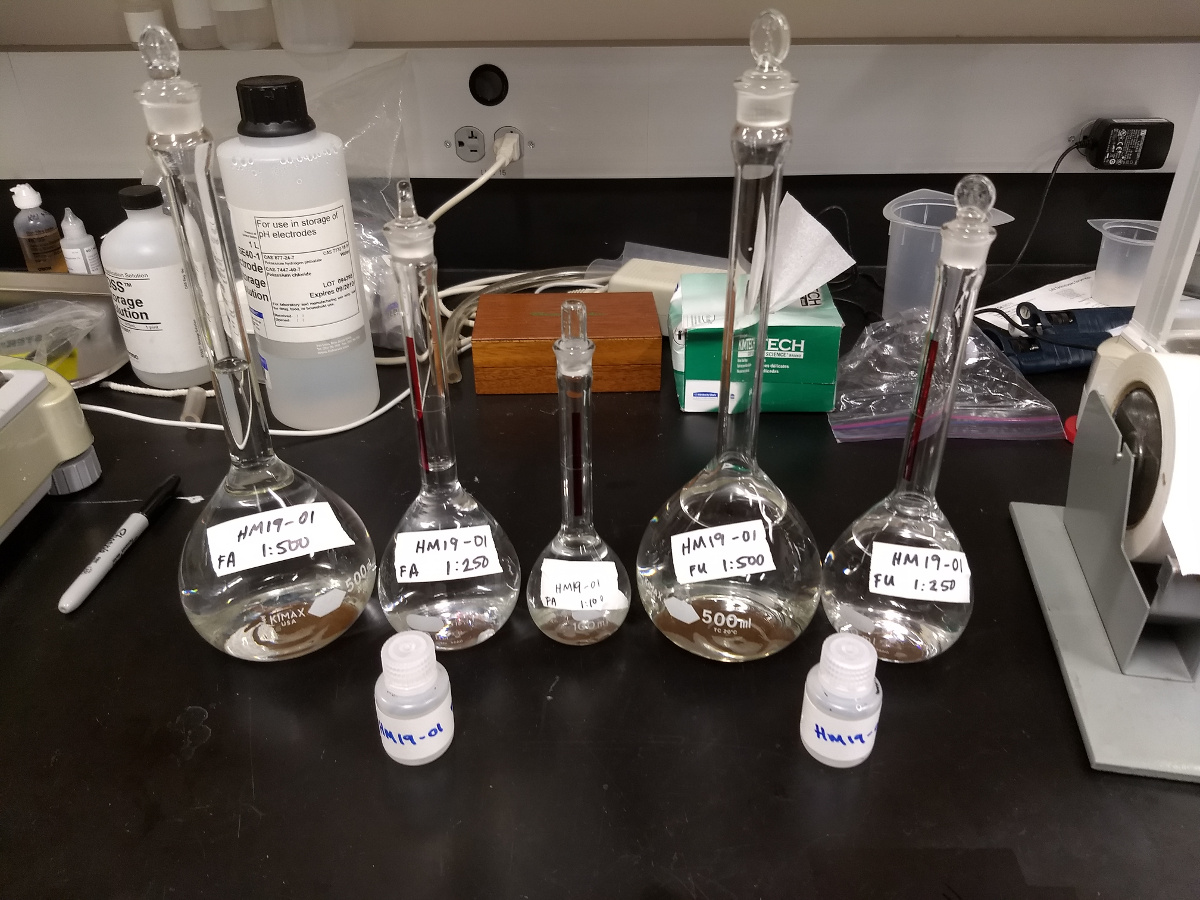 USGS Hawaiian Volcano Observatory and DOI Office of Aviation staff prepare the sampling mechanism (on blue tarp) and inspect the Unmanned Aircraft System (UAS) just before it took off to collect water from the Halemaʻumaʻu crater lake. Brightly-colored flagging tape tied to a cable attached to the UAS indicated depth as the sampling tool was lowered into the water. The October 26, 2019, UAS water collection flight was conducted with permission from and in coordination with Hawaiʻi Volcanoes National Park. DOI-OAS photo by J. Adams.

Crater lakes occur in many volcanoes around the world, including Poas (Costa Rica), Kawah Ijen (Indonesia), and Whakaari/White Island (New Zealand). But water in Halema‘uma‘u is a first in written history for Kīlauea, spurring interest both locally and globally.

The water has risen about 1 meter (1 yard) per week since first spotted on July 25, 2019. Initially, HVO was limited to remote observations of lake size, color, and surface temperature. As the lake grew, HVO began formulating a plan to sample the water. The lake’s chemistry could reveal where the water was coming from and what it might mean for degassing and potential hazards at Kīlauea’s summit.

After much discussion, HVO and other USGS scientists, Hawaiʻi Volcanoes National Park staff, and helicopter and Unmanned or Unoccupied Aircraft Systems (UAS) pilots decided that a UAS was the best option for sampling and would be attempted.

Our opportunity came just after the lake’s 3-month anniversary on October 26, 2019, when a USGS UAS successfully collected about 750 milliliters (25 ounces) of water from the lake. The sample was then shipped to mainland USGS laboratories for sophisticated analyses.

Results thus far indicate an acidic lake, with a pH of 4.2 (neutral is pH 7). Interestingly, most volcanic crater lakes have a pH of less than 3.5 (more acidic) or higher than 5 (less acidic), which places the Halema‘uma‘u lake’s pH squarely in the uncommon middle range. However, that might result from the lake’s young age and ongoing growth.

Mathematical modeling performed prior to the lake’s appearance predicted that groundwater could flow into Halema‘uma‘u once the area had cooled enough after the 2008-2018 lava lake drained away. So, it was not entirely a surprise when water began to pond in the crater.

But, it’s important to note that Halema‘uma‘u is where most summit sulfur dioxide (SO2) degassing takes place, and that SO2 dissolves readily in water.

As water flows underground toward the now-cooling crater, it dissolves SO2 rising from magma below. This leads to high concentrations of sulfate ions in the lake (53,000 milligrams per liter) and a tendency towards a more acidic pH.

However, that acidic water reacts chemically with Kīlauea’s basaltic rock, which makes the lake less acidic (raises the pH) and results in high concentrations of magnesium in the water. (Basalt is classified as a mafic rock due to its large amount of magnesium and iron [Mg and Fe] in addition to other elements, such as sodium and potassium.) The ratios of magnesium to sodium and of sodium to potassium in the lake water are similar to those ratios in Kīlauea’s basalt, which is further evidence of chemical reactions between the water and rocks.

Calcium concentrations are not very high in the water sample; calcium is instead combining with sulfate ions to form solid minerals that precipitate from the water. Iron is also likely forming various minerals, contributing to the lake’s yellowish colors.

Complex gas/rock reactions result in Kīlauea’s lake water being chemically different from groundwater in a research well south of Halema‘uma‘u and from rainwater. Testing of oxygen and hydrogen that form the water molecules indicate that the lake water was originally rain that percolated into the subsurface where it became groundwater and the chemistry changed.

The Halemaʻumaʻu lake is still rising. The current pH reflects the balance between incoming groundwater and the degree of SO2 degassing from below. If the lake level stabilizes, or the amount of SO2 changes, the pH may also change. At Mount Pinatubo (Phillipines), after its cataclysmic 1991 eruption, a crater lake formed with a nearly-neutral pH but became more acidic with increased SO2 degassing and later volcanic activity.

Chemical analyses confirm that the Halemaʻumaʻu crater lake dissolves magmatic SO2. This implies that HVO’s measured SO2 emission rates (about 30 tonnes per day) underestimate the total outgassed SO2 at Kīlauea. Without the lake, SO2 emissions from the summit would likely be higher.

This finding is important given that an increasing SO2 emission rate can indicate shallowing magma. Now, lake sulfate concentrations may be a new clue to changing conditions at Kīlauea. Accordingly, we hope that this first water sample is not our last.