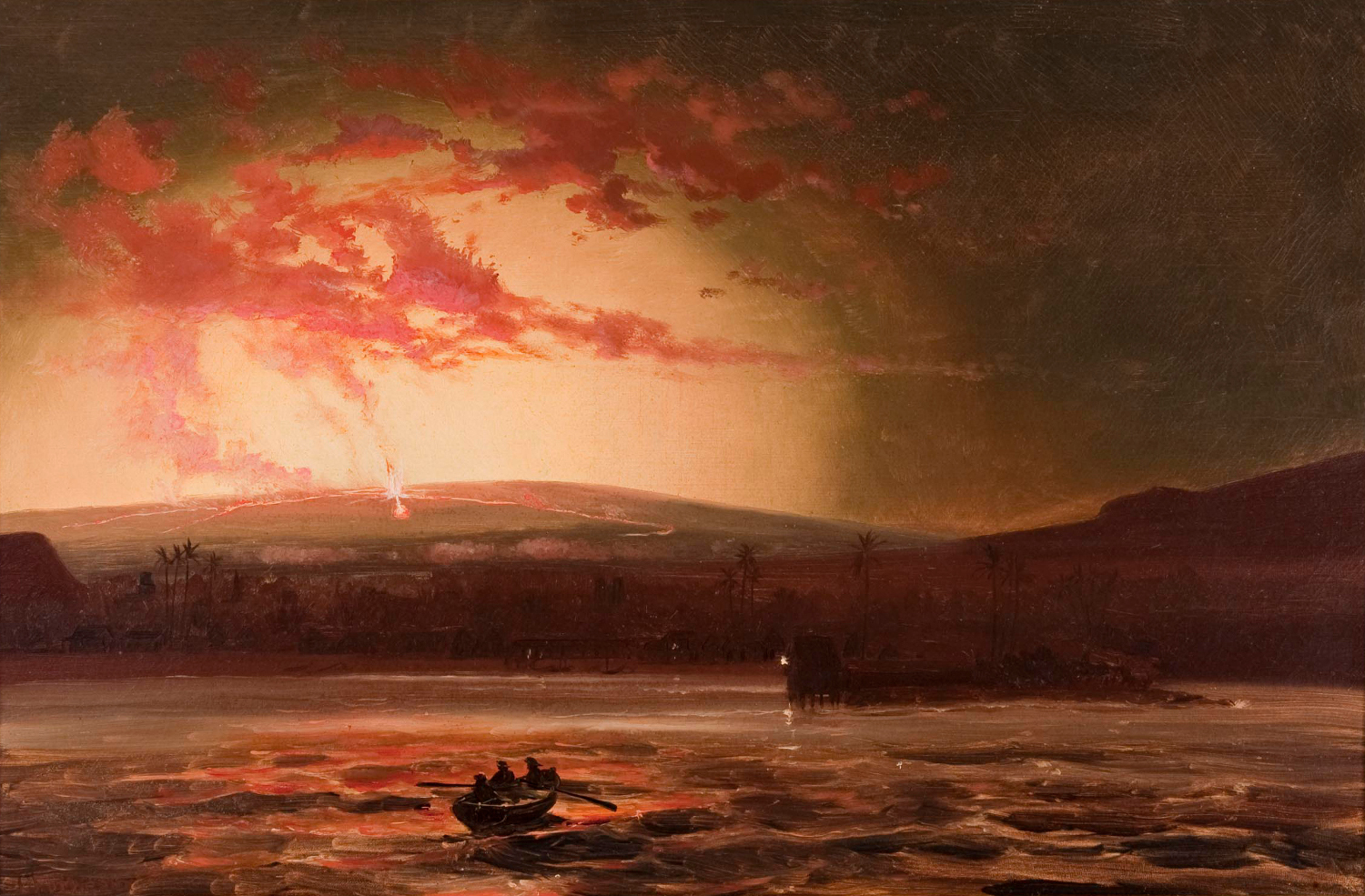 The 1880-1881 eruption of Mauna Loa produced lava flows that came within 1.7 km (1.1 mi) of the Hilo Bay shoreline. This painting by Charles Furneaux, “Night View 1880-1881, Eruption from Hilo Bay,” illustrates the first two flows as they would have been in November 1880. In reality, however, both flows would not have been visible from this vantage. (via USGS HVO)

(BIVN) – Mauna Loa is not erupting, and the the volcano’s USGS Alert level remains at ADVISORY, which does not mean that an eruption is imminent or that progression to an eruption is certain.

In their weekly Volcano Watch article, scientists with the USGS Hawaiian Volcano Observatory look back on the 1881 Mauna Loa lava flow that had a close call with Hilo.

A new USGS publication titled “The Lava Flow that Came to Hilo—The 1880–81 Eruption of Mauna Loa Volcano, Island of Hawai‘i” tells the story of this flow, briefly recounted below.

Three flows erupted from Mauna Loa in November 1880. The first two flows were fast-moving, and rapidly advanced both north and south from the Northeast Rift Zone at average speeds of 6 km (3.7 mi) per day before stalling a few weeks later. The third flow, which erupted from a slightly lower vent, advanced directly toward Hilo, although at a much slower average rate of 0.18 km (0.11 mi) per day.

The Hilo flow was slow but relentless, and as it got closer to Hilo, government officials took action to try to save the town. The Governor of the Island declared a day of prayer in early July 1881 to stop the flow, but it kept advancing and praying continued.

At the end of July, Princess Ruth Luka Keʻelikōlani, a descendant of the Kamehameha line of chiefs, traveled from Honolulu to Hilo. There, she camped with her entourage on Puʻu Honu, the westernmost hill of the three Hālaʻi hills (the most makai, or lowest, hill is at the top of Haili Street in Hilo). Puʻu Honu was an excellent vantage point from which to observe the Hilo flow.

A week after Princess Ruth arrived in Hilo, Princess Regent Liliʻuokalani and her department heads also arrived in Hilo, where they met to consider ways to save the town. This may have been the first time in Hawaiian history that lava flow diversion was discussed.

A plan of action, including building barriers to divert the flow, building shelters for those displaced by the flow, and placing dynamite somewhere along the lava conduit (or tube) to drain the flow’s supply of lava, was devised and sent back to Honolulu. Hilo families and friends entertained both Princesses during the following week while the Hilo flow continued to slowly advance.

In early August, Princess Ruth’s attendants secured brandy and red scarves. She approached the flow somewhere within what is now the ʻAlenaio gulch, where she offered the brandy and scarves and chanted, asking Pele, the Hawaiian volcano deity, to stop the flow and go home. By all reports the flow stopped.

About that same time, government supplies for building barriers and shelters and draining the lava flow arrived, but the flow had stopped. Only one homestead outside of Hilo had been destroyed. The town of Hilo was spared.

In retrospect, not only did officials understand how lava flows were supplied with lava from the vent, they felt confident that they could manipulate the flow’s advance by using dynamite to breach the supply conduit and stall the flow.

Reverend Titus Coan, a Hilo missionary, had discovered these lava conduits and how they worked in 1843 while observing a Mauna Loa lava flow erupted that year. In 1881, Coan’s ideas were being used in a plan to stop an active lava flow! Coan must have been thrilled that his discovery of these lava conduits, which he named “pyroducts,” were understood by his fellow residents and missionaries. Sadly, this would be his last eruption; he died 16 months later, on December 1, 1882.

There are many stories surrounding the 1880-81 eruption, illustrated by numerous photographs, paintings, and maps. Photography was being used more often in Hawaiʻi and traditional artists were finding inspiration in various aspects of the volcanic activity and displaying them in vivid color.

Until recently, there was confusion about where the first lava flow erupted in November 1880 was located. Using chemical analyses of lava flows in the vicinity, as well as eye-witness accounts of the 1880 flow, the true identity of that first flow was revealed.

Many more details of this fascinating eruption can be found in the new USGS publication, which can be freely downloaded here.