HILO, Hawaiʻi - The University of Hawaiʻi at Hilo Daniel K. Inouye College of Pharmacy celebrated the dedication of its permanent building on Wednesday. 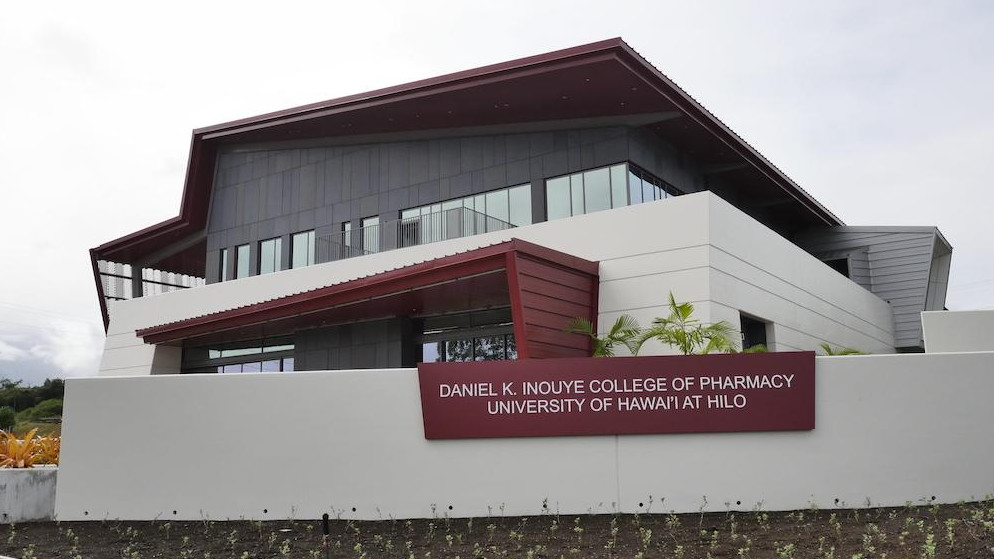 (BIVN) – Students, faculty, and public officials celebrated the long awaited opening of the new permanent building for the Daniel K. Inouye College of Pharmacy at the University of Hawaiʻi at Hilo.

The $31-million, two-story building is in the University Research Park, one block away from the ʻImiloa Astronomy Center. The “unique and contemporary” design by WCIT Architecture includes classrooms “that accommodate applied learning, high-fidelity simulations and distance audio/visual communications,” UH officials say.

“As the only College of Pharmacy in the Pacific Rim, we are the academic cornerstone for the most advanced level of pharmacy practice and pharmaceutical science research,” said DKICP Dean Carolyn Ma. “Our students, taught by our exceptional faculty and supported by dedicated staff, can continue living our mission to improve the health throughout the State of Hawai‘i and the Pacific Rim.”

The events included a Hawaiian kīpaepae ceremony and taiko drumming.

Established in 2006, DKICP admitted its inaugural class in 2007, and has graduated 744 Doctor of Pharmacy students and five Doctor of Philosophy students.

Ken Inouye, the son of college namesake Daniel K. Inouye, said the vision for the pharmacy school began back when his father first got in the U.S. Senate. Ken said his father was very concerned that the State of Hawaiʻi was becoming too Oahu-centric. The neighbor islands, “potentially, would be relegated to a second-class status, and he did not want that to happen,” he said.

The new building, Ken said, “is an example of just one aspect of that vision. That every island has a center of excellence to speak for it.”