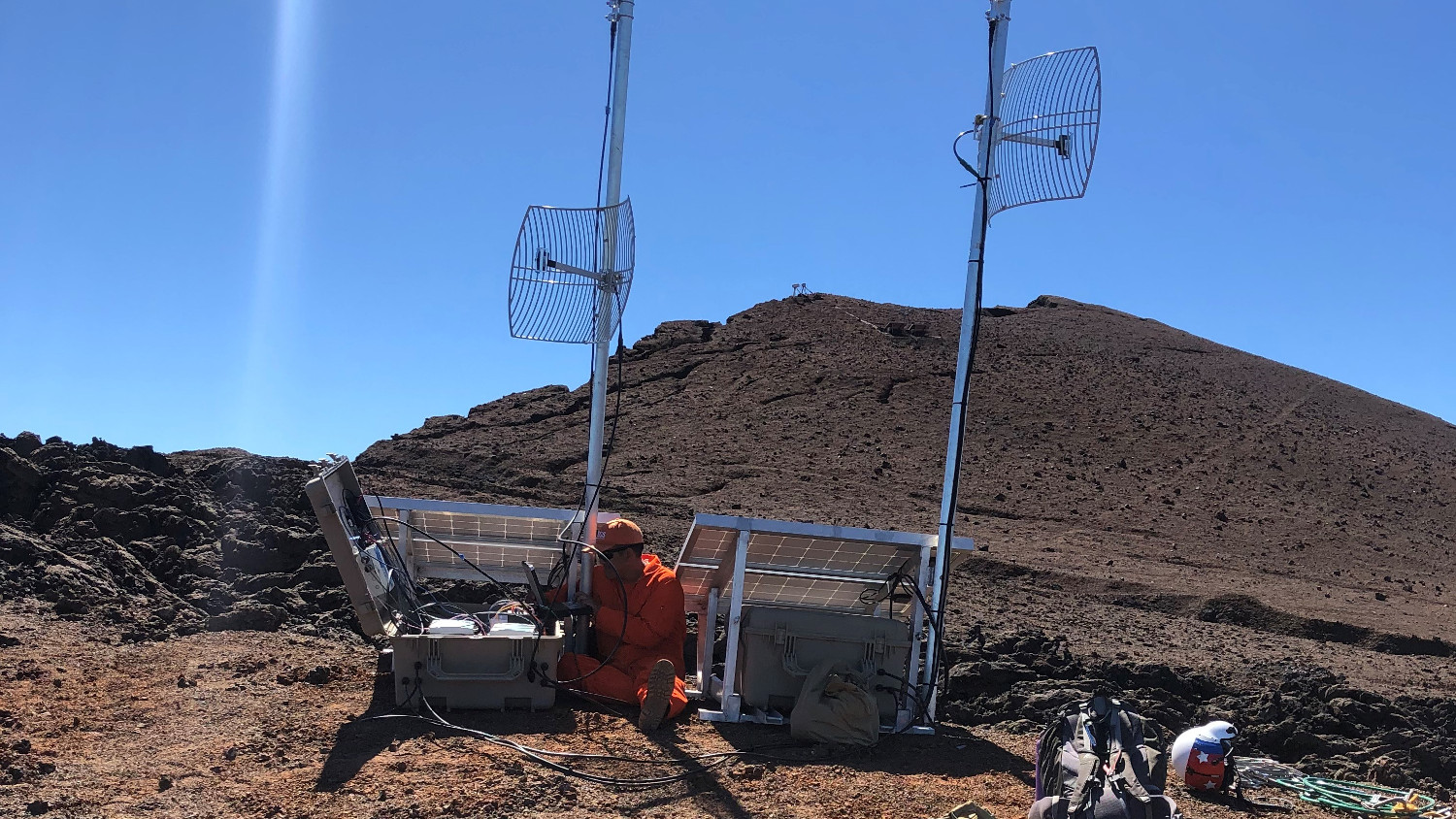 "When a crack near an existing data-telemetry hub on Pu‘u ‘Ō‘ō was observed to be growing over several weeks, HVO prepared a contingency hub that could be rapidly installed if/when necessary," USGS wrote. "On November 15, 2019, after a portion of the Pu‘u ‘Ō‘ō crater rim collapsed, further threatening the existing telemetry hub, HVO field engineers deployed the contingency hub nearby." (USGS photo by C. Moniz.)

HAWAIʻI ISLAND - Neither volcano is erupting, and scientists say there has been no significant change in volcanic activity during November.

(BIVN) – The USGS Hawaiian Volcano observatory reported on Thursday that there have been no significant changes in activity at either Kīlauea or Mauna Loa volcanoes since the last update.

During the past week, approximately 70 small-magnitude earthquakes (nearly all smaller than M2.0) were detected beneath the upper elevations of Mauna Loa. Most of the earthquakes occurred at shallow depths of less than 6 km (~4 miles) below sea level. Global Positioning System (GPS) and Interferometric Synthetic Aperture Radar (InSAR) measurements show continued summit inflation, consistent with magma supply to the volcano’s shallow storage system. Readings of fumarole temperature and gas concentrations at the Sulphur Cone monitoring site on the Southwest Rift Zone remain stable.

Monitoring data have shown no significant changes in volcanic activity during November. Over the past month, about a dozen DI events occurred beneath the summit. Seismic stations detected over 1800 earthquakes in the vicinity of the volcano, which is an increase of ~10% from last month. Rates of seismicity are relatively consistent throughout the month, although at the summit, episodic increased rates appear to be coincident with the inflated phase of the DI events. Sulfur dioxide emission rates are low at the summit and are below detection limits at Puʻu ʻŌʻō and the lower East Rift Zone. The pond at the bottom of Halema’uma’u, which began forming on July 25, 2019, continues to slowly expand and deepen, and the most recent measurements are 162 meters in the east-west direction and 73 meters in the north-south direction.

Farther east, GPS stations and tiltmeters continue to show motions consistent with slowed refilling of the deep East Rift Zone magmatic reservoir in the broad region between Puʻu ʻŌʻō and Highway 130. Monitoring data do not suggest any imminent change in volcanic hazard for this area. In addition to motion along the East Rift Zone, the south flank of Kīlauea continues to creep seaward at elevated rates following the May 4, 2018 M6.9 earthquake near Kalapana. HVO continues to carefully monitor all data streams along the Kīlauea East Rift Zone and south flank for important changes.

The Hawaiian Volcano Observatory continues to keep a close eye on both volcanoes.