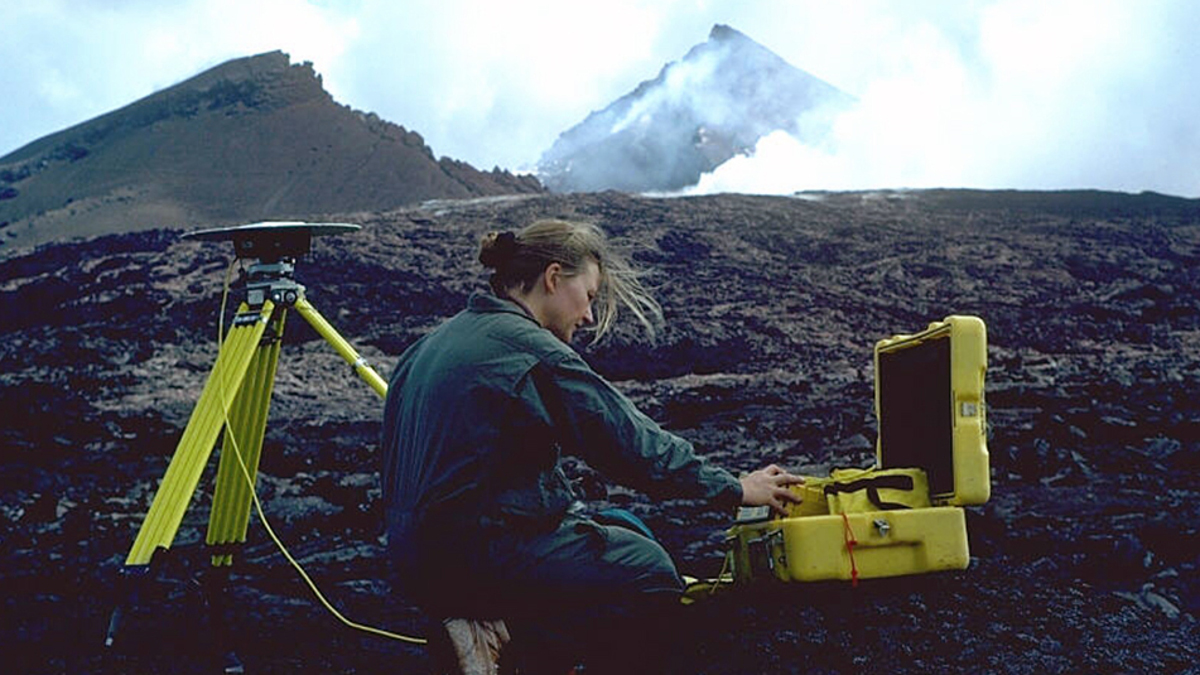 The 30-year career of soon-to-be retired USGS Hawaiian Volcano Observatory geophysicist Asta Miklius was largely devoted to studying how the motion of the ground reflects magmatic processes beneath the surface. Shown here in 1997, she measured the precise position of a benchmark near Puʻu ʻŌʻō on Kīlauea Volcano’s East Rift Zone to track an intrusion of magma. USGS photo.

HAWAIʻI ISLAND - Hawaiian Volcano Observatory geophysicist Asta Miklius retires at the end of the month... for real, this time.

(BIVN) – The career and contributions of a USGS Hawaiian Volcano Observatory “shining star” was honored in this week’s Volcano Watch article, written by USGS HVO scientists and affiliates. The article reads:

On March 30, 2018, a change occurred within the ranks of the USGS Hawaiian Volcano Observatory’s (HVO’s) staff when geophysicist Asta Miklius retired. One month later, a collapse at Pu‘u ‘Ō‘ō heralded the start of Kīlauea Volcano’s lower East Rift Zone eruption and summit collapses. In the subsequent chaos of the 2018 volcanic events, Asta’s 30-year career with the HVO deformation group was never properly acknowledged.

With the volcanic crisis underway, Asta immediately stepped up to assist with HVO’s eruption response—a testament to her commitment to both HVO and the Island of Hawaiʻi. She then accepted a part-time position with HVO, where she continued working through 2019.

Today, we honor the exceptional contributions of our HVO colleague and friend, Asta, who, at the end of this month, again “retires”—for real, this time.

Asta grew up in Chicago and earned Bachelor and Master of Science degrees in geology, petrology, and geophysics from the University of Illinois. In 1988, she joined HVO’s staff.

At HVO, Asta monitored the deformation of Hawaiian volcanoes and researched how this information could be used to better understand the inner workings of Kīlauea and Mauna Loa. She oversaw the transition from older technologies, such as measuring surface motion with lasers, to modern techniques—most notably the continuous Global Positioning System (GPS) network on the Island of Hawaiʻi. Asta also worked to install and operate several other sophisticated instruments, including borehole tiltmeters, borehole strainmeters, and continuous gravimeters.

Her job at HVO was neither small nor easy. Instruments needed maintenance, data analysis involved complex computer processing routines, and new technologies required evaluation. This meant that Asta had to be a research scientist, electrical engineer, IT specialist, office manager, and field technician all at the same time.

Thanks to her commitment to excellence, Asta ensured that HVO’s geodesy network was always one of, if not the, best in the world. Particularly adept at collaboration, she worked with both U.S. and international scientists to conduct experiments and pursue cutting-edge research.

During Asta’s career, HVO hosted numerous USGS scientists who generally rotated in from mainland positions for a few years. Through these many transitions, Asta was the glue that held HVO’s deformation effort together. Credit for HVO’s reputation as a leader in volcano deformation research and monitoring largely belongs to her.

In the 1990s and 2000s, Asta led the charge to better instrument Mauna Loa with GPS stations and was the first to recognize the complex deformation occurring at the volcano. She showed that the south side of Mauna Loa is sliding southward, much like at Kīlauea, and that the complex pattern of uplift at Mauna Loa’s summit is due to multiple magma reservoirs, rather than one simple source as had long been assumed.

Asta also lent her expertise to studies of Kīlauea, recognizing that magma supply to the volcano fluctuates and impacts eruptive activity. In staff discussions, especially during the dramatic events leading to the 2018 summit collapse, Asta’s voice was one of the most respected in the room. She used her incredible experience and insight to guide both scientific and societal responses to Kīlauea’s activity, and mentored HVO staff in their responses to volcanic events.

In addition to her research and monitoring work, Asta led the effort to modernize HVO’s data management system, helping to integrate all data streams (deformation, seismic, gas, and others) into a common database so that scientists can better understand changes that occur on volcanoes. Tools that Asta maintained are now used by volcano observatories around the world.

Asta also tirelessly contributes time to island communities. Her well-known efforts include the restoration of native ecosystems and the rescue of animals, especially during volcanic crises. In 1990, Asta evacuated cats and dogs from Kalapana as lava flows approached, adopting her long-time feline companion, Lili, in the process. In 2018, Asta again helped save hundreds of pets and livestock from encroaching lava flows. Her kindness touches everyone she meets.

We thank you, Asta, for your friendship and unselfish dedication to HVO and Hawaiʻi. Both are better places because of your wisdom and compassion—and we are all better people for knowing and working alongside you. You are indeed a shining star and we wish you all the best!