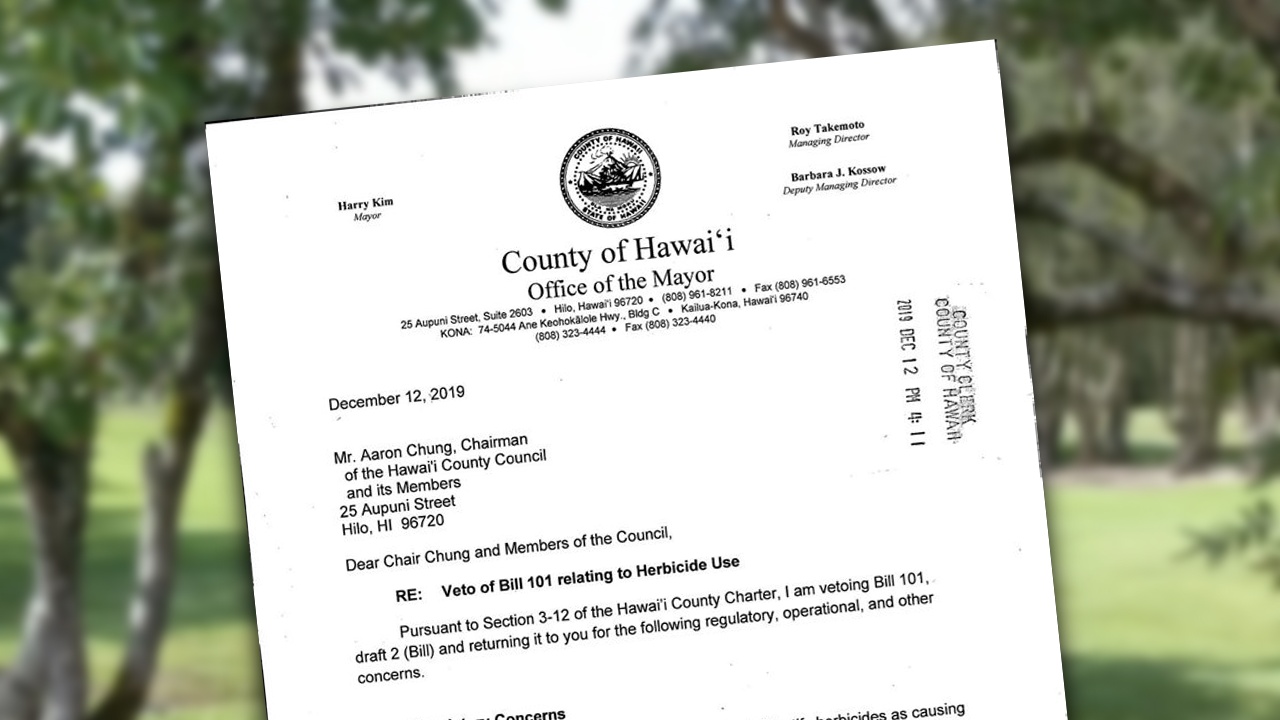 HILO, Hawaiʻi - In his letter to council, the mayor expressed numerous regulatory, operational, and other concerns over the proposed law that would end the County’s use of herbicides in maintaining county parks and roads.

(BIVN) – Hawaiʻi County Mayor Harry Kim has decided to veto a proposed law to end the County’s use of herbicides in maintaining county parks and roads.

Bill 101 was approved by the Hawaiʻi County Council by a 6 to 3 vote last month.

Mayor Kim sent the following veto message to the council:

Dear Chair Chung and Members of the Council,

RE: Veto of Bill 101 relating to Herbicide Use

Pursuant to Section 3-12 of the Hawaiʻi County Charter, I am vetoing Bill 101, draft 2 (Bill) and returning it to you for the following regulatory, operational, and other concerns.

A. The County does not have the level of expertise to identify herbicides as causing “high risk of exposure,” as “dangerous chemicals” or as “harmful chemicals.”

o The Environmental Protection Agency (EPA) is responsible for regulating pesticides at the national level.

o The Department of Agriculture regulates and enforces pesticide licensing, sale and use at the State level.

o The Bill disregards the national and State regulations in place to ensure the safety of people who use herbicides and well as those who work and play in areas where herbicides are used.

B. This Bill identifies and codifies the twenty-three (23) listed herbicides as substances subjecting “the public, County workers, domestic animals and wildlife to a high risk of exposure to dangerous chemicals.”

o The specific twenty-three (23) herbicides are arbitrarily listed in the Schedule of Prohibited Herbicides. There is no basis or explanation as to how or why these herbicides were included in this list.

The County should not indiscriminately prohibit herbicides that have no relationship to its current use of herbicides and create unnecessary concerns.

The EPA lists “Alachlor” as an herbicide used on agricultural crops.

The chemical “Trilopr” is not an active ingredient in any common herbicide and should not be included in the list.

C. This Bill identifies and codifies one herbicide as a “probable carcinogen.”

o The Bill relies upon the World Health Organization’s (WHO) listing of glyphosate as a “probable carcinogen.”

– In 2015, the WHO International Agency for Research on Cancer (ARC) was one program (out of four) that published an evaluation of glyphosate categorizing it as “probably carcinogenic”.

– The other three programs within the WHO that reviewed glyphosate found glyphosate pot to be a probable carcinogen:

2. WHO Guidelines for Drinking-Water Safety, and

3. WHO International Programme on Chemical Safety

o In 2017, the EPA evaluated the cancer risk of glyphosate to humans and determined that glyphosate was “not likely to be carcinogenic to humans” when used according to the labels.

o Delete the statement. “Exposure to these substances subjects the public, County workers, domestic animals and wildlife to a high risk of exposure to dangerous chemicals.” This is not an accurate statement.

o Revise or delete the statement in the Findings and Purpose attributed to “dangerous chemicals” and “harmful chemicals.”

o Revise or delete the statement in the Findings and Purpose related to WHO.

– The Committee is to be made up of seven highly specialized individuals that will be challenging to find.
– The Committe “shail be residents of the County.”
– This requirement limits the Committee from the expertise of non-residents and creates a problem when trying to fill these volunteer positions.

o Delete the requirement that members of the Commitee “shall be residents of the County.”

B. The requirement to post notices at every site twenty-four hours prior to the application of “prohibited herbicides” translates into a multi-day pre-notice of the intent to apply herbicides.

o Delete the requirement that a notice must be placed at the site where herbicide will be used “at least twenty-four hours before application.”

C. Section 14-145 (6) (2) states “[t]he area sprayed shall be made inaccessible to the public until the sprayed product dries, but for no less than four hours, or in accordance with the product’s label, whichever is greater.”

o There is no language in the Bill that explains why following the directions relating to dry time on the product’s label is not sufficient.

o Mandating a 4-hour inaccessibility window essentiaily translates to an entire day (or more) of closure — partial or complete.

If herbicide is applied any time after 3-hours into an employee’s workday, they will not have the time to return to the site and remove the barricades or reopen a park.

o Delete the requirement that an area sprayed shall be made inaccessible to the public for “no less than four hours, or in accordance with the product’s label, whichever is greater.”

A. The terms “public park”, “targeted invasive species” and “waterway” are not defined.

B. The new processes during the transition period make public access to to facilities unpredictable and affecting these areas:

You have this administration’s pledge to form a Committee to guide County operations in identifying and using best practices for the management of vegetation on County property with the goal of reducing the use of herbicides. The function of this Committee is critical to the success of a program that ensures the continued protection of the community from exposure to handful chemicals.

We are committed to the environment and the health and welfare of residents, visitors, and wildlife. The commitment to work with you on this very important issue to protect the people from exposure to harmful chemicals and doing our job of controlling invasive species is critical and reaffirmed.

The County Council will now have an opportunity to override the mayor’s veto. They will need 6 votes to do so.