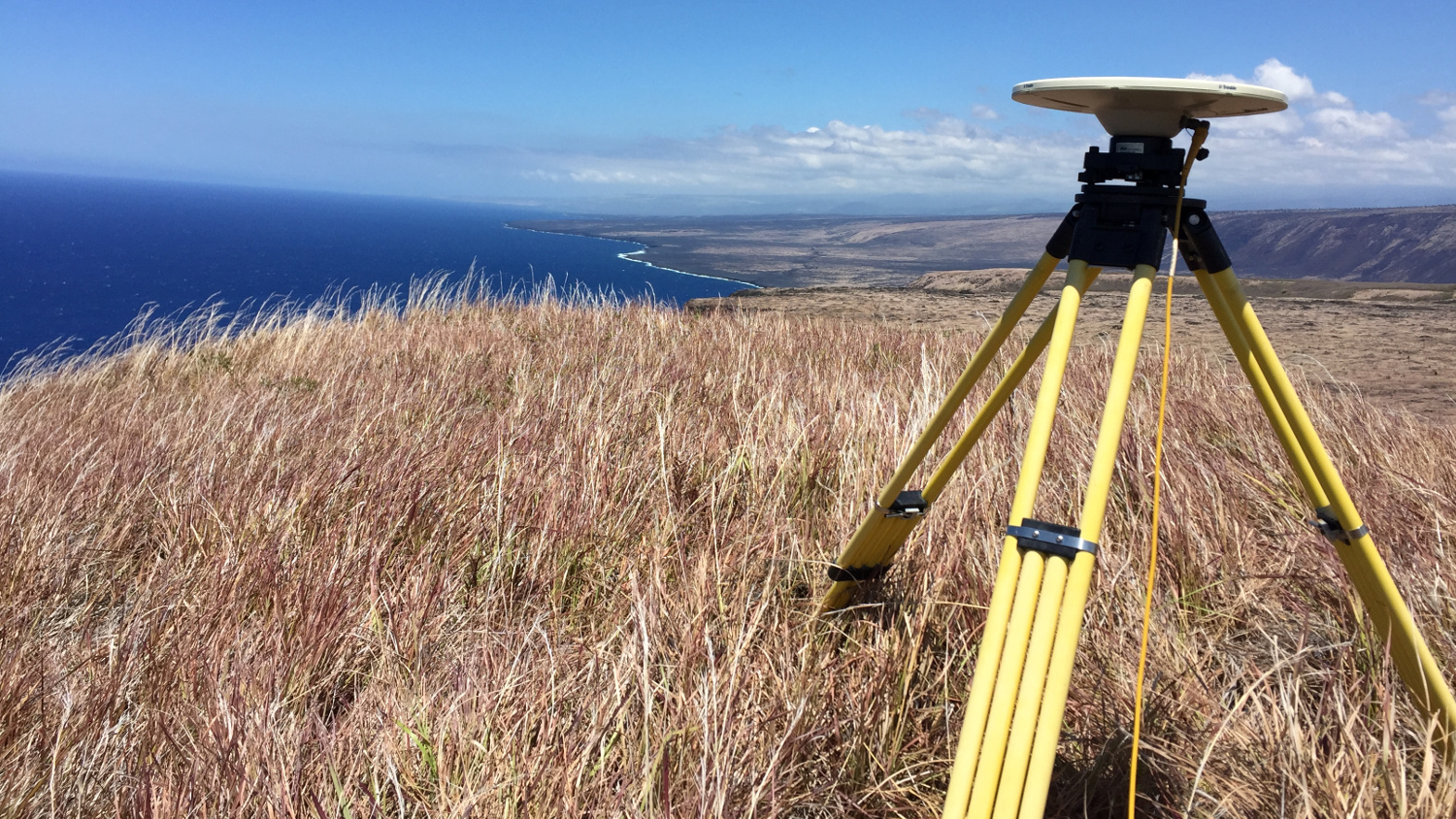 Campaign GPS antenna on Kīlauea’s south flank at Puʻukapukapu inside Hawaiʻi Volcanoes National Park during the 2019 Kīlauea GPS campaign. View is to the southwest along the Kīlauea Volcano coastline. USGS Photo by Sarah Conway.

HAWAIʻI - In this week's Volcano Watch article, the USGS Hawaiian Volcano Observatory the 67-station GNSS network spread out across the island, used to monitor volcanic deformation.

(BIVN) – Kīlauea and Mauna Loa are not erupting, and scientists continue to monitor both volcanoes using a variety of methods.

When you think of GPS, what typically comes to mind? Your phone, the navigation in your car or maybe your watch? The Global Positioning System (GPS) is a US satellite-navigation system originally designed for military use but now an extremely popular and widely used technology.

In addition to the US constellation, there are 3 other Global Navigation Satellite Systems (GNSS)—GLONASS (Russia), Galileo (European), and BeiDou (China). New GNSS receivers can simultaneously track multiple constellations of satellites (for example 8 GPS satellites, 3 GLONASS and 2 Galileo) that provide improved accuracy.

HVO operates a 67-station GNSS network spread out across the island but concentrated near persistent deforming features like rift zones. These high-precision GNSS stations give scientists a 24/7 record (called a time-series) of the precise position of the antenna every second through time.

How does this work? GNSS satellites send out radio waves that travel at the speed of light and transmit information about the exact position of the satellite and the current time. The antenna on the ground listens to the radio signals from multiple satellites and passes them to the receiver which calculates the exact location using a process called trilateration.

Handheld GPS like that in your phone can determine your position within a few meters or yards, but high-precision GNSS equipment and analysis can determine a location down to a fraction of an inch.

Currently, the American GPS constellation has 33 operational satellites orbiting at an altitude of 20,000 km (12,500 mi). To accurately pinpoint the location of a high-precision GNSS station, the receiver must “lock-on” or continuously receive data for 6 hours as satellites arc across the horizon in view of the station. Only 4 satellites are needed to calculate a 3-D location, but typically a GNSS receiver will track 8 or more to calculate a more precise position.

There are several factors that affect the GNSS signal and accuracy of derived locations. The ionosphere and troposphere, layers of the atmosphere through which the radio waves travel, introduce delays in the radio signals that can be corrected with atmospheric models. Noise from signals reflected off nearby objects, such as tall buildings or trees, is called multipath. This makes it especially important for GNSS antennas to have enough clear “sky view” without object interference. This is also why the GPS on your phone does not work well inside a building!

To get a more complete view of the deforming volcano, HVO also conducts yearly campaign surveys on Mauna Loa and Kīlauea. During these surveys, HVO staff place temporary GPS receivers and antennas on benchmarks and leave the equipment in place for a couple of days at each site. Benchmarks are permanent brass disks that have been drilled into the ground. The benchmark typically has a cross inside a triangle that serves as a reference point for centering of the antenna.

During each survey, we return to these benchmarks to collect data and determine how the point has moved. Data collected allow us to calculate both a horizontal and vertical location, similar to latitude, longitude, and altitude and thus to evaluate the change from prior surveys.

Campaign GPS surveys have been conducted on both Mauna Loa and Kīlauea since the mid-1990s providing extraordinary time-series records of volcano deformation. Along with Mauna Loa and Kīlauea, Hualālai and Haleakalā volcanoes are surveyed periodically (approximately every 3 to 5 years) as part of our volcano monitoring program. This past October, HVO surveyed the western flank of Mauna Loa to add to the picture of volcano deformation provided by the continuous network.

Measuring the changing shape of the volcano helps us refine models of what is happening beneath the surface, for example, the inflation of a magma reservoir. A combination of improved technology and new data processing techniques is providing our best data yet in the history of satellite-based geodesy at HVO.