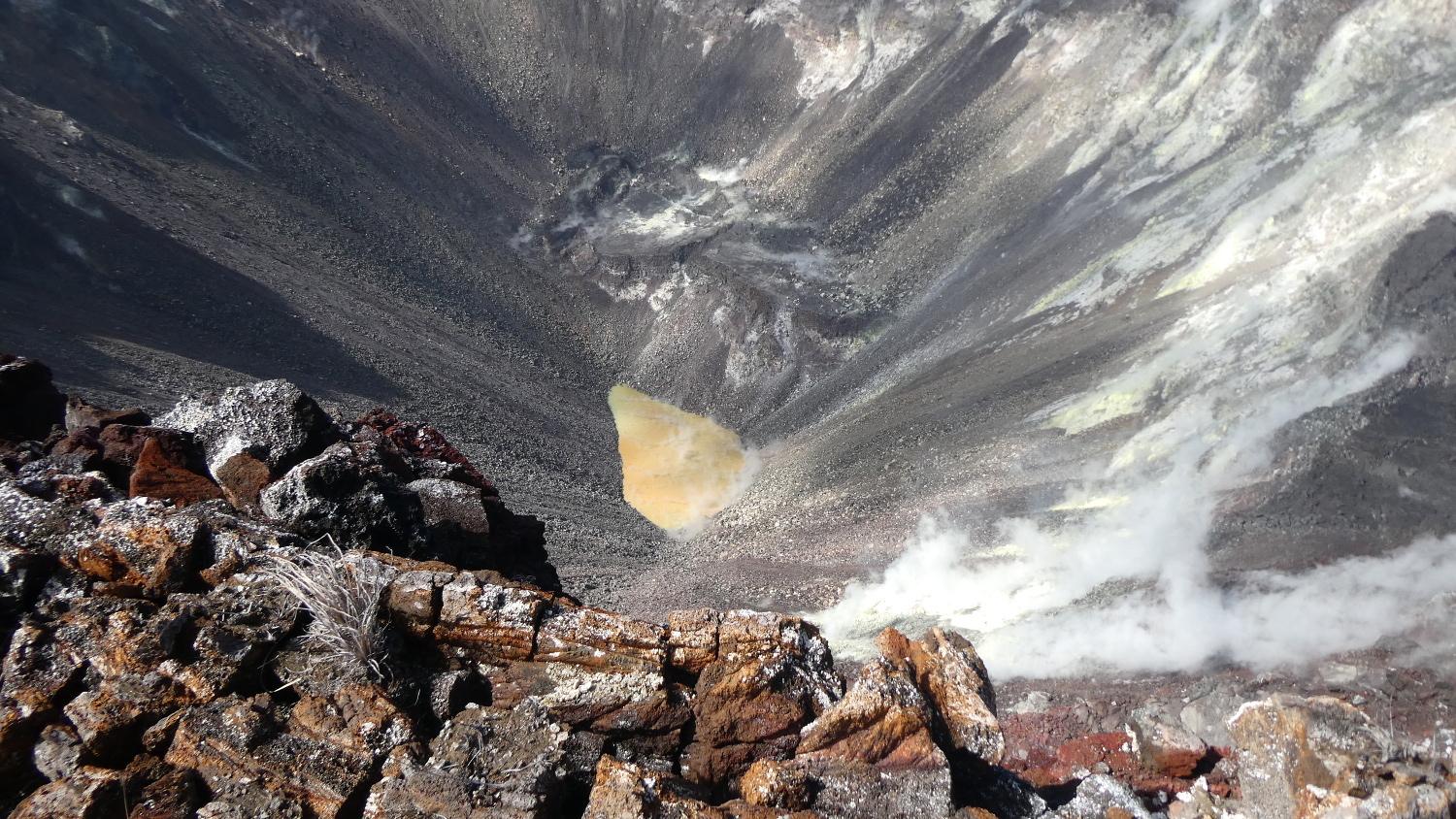 The growing lake of groundwater within Halemaʻumaʻu at the summit of Kīlauea Volcano as it looked on December 18, 2019. USGS photo by M. Patrick.

HAWAIʻI VOLCANOES NATIONAL PARK - As scientists monitor the growing crater lake at the summit of Kīlauea, they are also consulting stories that tell of the threat of water to Pelehonuamea. 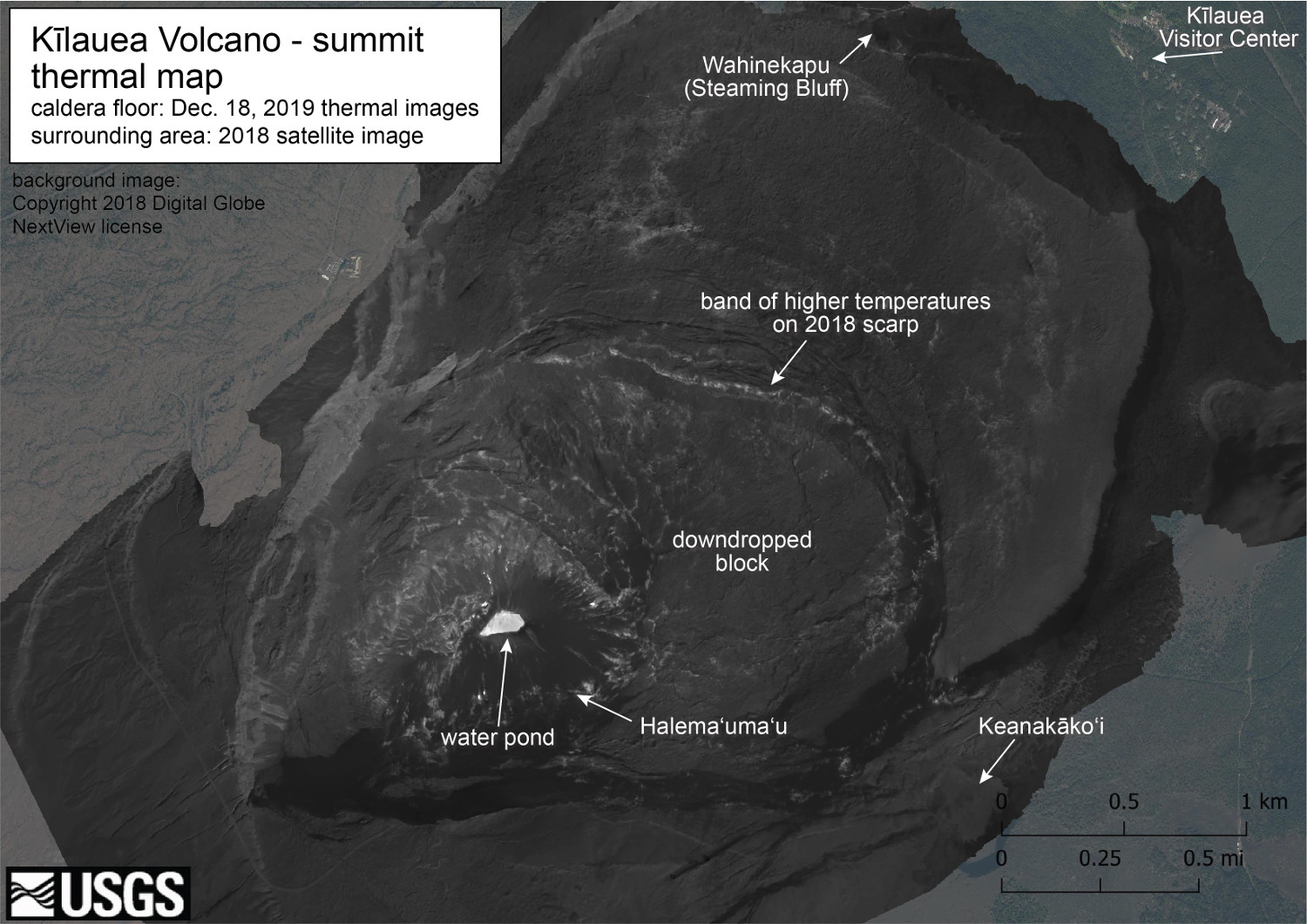 (USGS map) The December 18 overflight provided updated thermal images of Kīlauea summit, covering the caldera floor and showing the warm surface of the water pond in Halema‘uma‘u crater. A band of warm temperatures persists along the new cliff formed during the 2018 subsidence. The label “downdropped block” shows the large portion of the caldera floor that subsided, along with the Halema‘uma‘u region, during the 2018 eruption. The surrounding area is shown by a 2018 satellite image. This preliminary thermal map has some small areas of distortion, including some spots along the caldera rim.

(BIVN) – As the new water pond in Halemaʻumaʻu at the summit of Kīlauea continues to grow, scientists are looking to Hawaiian chants for mention of past crater lakes.

The Halemaʻumaʻu crater lake at the summit of Kīlauea Volcano is on everyone’s mind at the USGS Hawaiian Volcano Observatory (HVO).

This is the first lake of groundwater observed on the crater floor in nearly 200 years. So we looked to Hawaiian chants for mention of a crater lake before western contact and whether it was associated with explosive eruptions.

To our knowledge, a lake is not mentioned explicitly, but Hawaiians did tell a few stories where Pelehonuamea faced the threat of water drowning her volcanic fires at Kīlauea. A few are briefly recounted here.

Pele and her older sister Namakaokahaʻi, the eldest in a family of many siblings, were imbued with different powers—Pele reigned over volcanoes and eruptions; Namakaokahaʻi ruled the seas and beaches.

Namaka, as she is known to friends, hated when Pele spread lava over beaches and intruded land into the ocean. Pele didn’t appreciate Namaka trying to remove lava from the coasts. They fought frequently. We see these two sisters continuing to fight with spectacular explosive displays each time lava enters the ocean.

Another Pele story involving water features Kamapuaʻa, the pig deity from Oʻahu, who traveled to Kīlauea to woo Pele and take her for his wife. Pele persistently spurned his advances, insulting him and even trying to kill him. Kamapuaʻa’s infatuation turned into anger, and the pig-man flooded Pele’s crater with water to put out her volcanic fires.

Fortunately, Pele’s brother hid her firesticks and used them to reignite the volcanic flames. Some versions of this story describe Pele chasing Kamapuaʻa to the sea as either a lava flow or ejected hot rocks; other versions resolve the conflict in a brief marriage.

A better-known story is the saga of Hiʻiakaikapoliopele, Pele’s youngest sister. It’s a long story mostly focused on Hiʻiaka’s journey from Kīlauea Crater to Kauaʻi to retrieve Pele’s lover, Lohiʻau. Along the way, Hiʻiaka developed into a powerful woman.

The journey was long, and Pele became suspicious that Lohiʻau was being unfaithful to her.

When Hiʻiaka arrived at the Kīlauea Crater rim with her new husband, Lohiʻau, Pele was incensed and ordered her siblings to kill him as punishment. This enraged Hiʻiaka and she decided to retrieve Lohiʻau’s spirit to revive him, and to seek revenge and destroy Pele by flooding Kīlauea Crater with water.

Hiʻiaka jumped down to the crater floor, and not finding the spirit of her husband, stomped her feet. “The entire crater of Kīlauea was rocked and the cliff walls of Uēkahuna trembled” (from “The Epic Tale of Hiʻiakaikapoliopele” translated by Nogelmeier) and the first layer of Kīlauea cracked open. She looked down, but still not seeing her husband, she stomped again.

She continued stomping through several layers without finding her husband’s spirit. The described effects of Hiʻiaka repeatedly stomping to get deeper beneath the crater floor are eerily like the continuous strong shaking of the 2018 collapse events.

Hiʻiaka finally got down to the fifth layer that was holding back water, which, if released, would rise and flood the crater, turning Kīlauea into a lake and putting out Pele’s fires forever. At the last instant, Hiʻiaka was dissuaded from her destructive task and reconciled with her sister.

Hiʻiaka was seeking groundwater like that which appears in Halemaʻumaʻu today. Geophysical studies over the past 30-40 years showed the presence of a water table, elevated about 600-800 m (2,000-2,600 ft) above sea level, beneath the caldera floor. HVO scientists hypothesize that the currently growing lake is an exposure of this groundwater returning to its former level following the 2018 summit collapse. It is only visible to us because of the deep pit formed by that collapse.

An analogy is digging a hole in beach sand. If you dig deep enough, water will start to flow through the sand into the hole.

HVO geologists think this Hiʻiaka story may have been inspired by an earlier Kīlauea caldera collapse about 1500 CE. Although in most versions of the story Kamapuaʻa’s deluge didn’t result in explosions and Hiʻiaka never unleashed subterranean water, geologic study of post-collapse explosive deposits suggests at least an intermittent presence of a lake.

These legends are but a few from the rich Hawaiian literature on Pelehonuamea and her volcanoes. Along with geologic studies, they can provide insight to understanding the ever-changing volcanic landscape of Kīlauea Volcano.