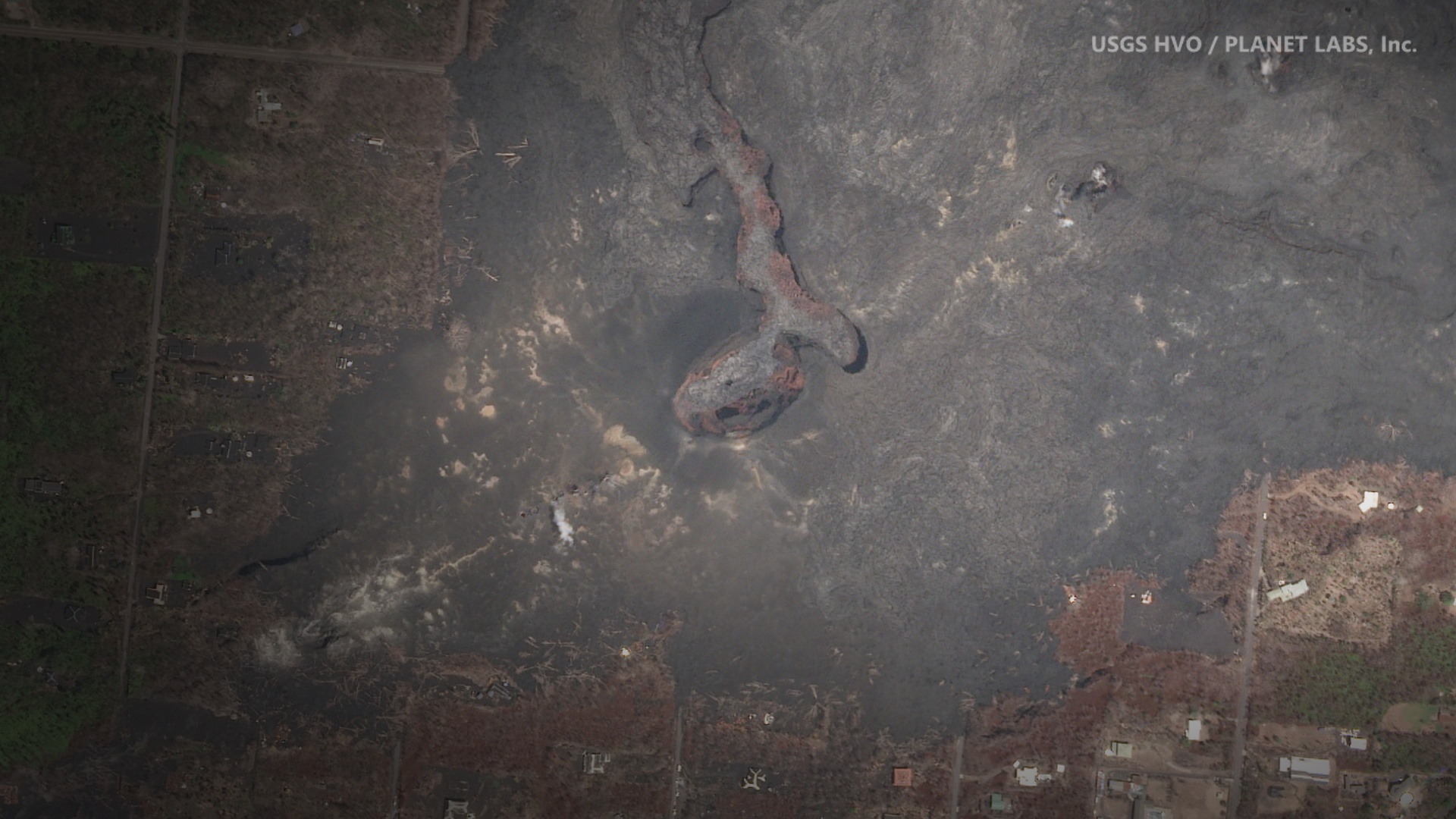 Name For Fissure 8 Could Be Chosen Tuesday

HONOLULU, Hawaiʻi - The Hawaiʻi Board of Geographic Names could decide to select the name that a report says "appears to have the most community support at this time", Ahu ‘Ailāʻau.

(BIVN) – The group tasked with finding an appropriate name for the most-active volcanic vent that emerged during the 2018 eruption of Kīlauea Volcano seems to have a preference.

The PUNA Permitted Interaction Group assembled by the Hawaiʻi Board of Geographic Names has written its final report on the naming of Fissure 8 in Leilani Estates, and makes two possible recommendations to the board.

As one option, the report recommends creating another Permitted Interaction Group “to continue the community discussion to allow for additional support for one of the recommended high priority names”, which would allow the community more time to voice their opinions and share thoughts.

A second possible course of action proposed in the report is to “select a name that appears to have the most community support at this time”, Ahu ‘Ailāʻau.

The name was created through a collection of culturally knowledgeable community members and kupuna, the report notes. It also mentions the YouTube video posted by Hawaiʻi PODD featuing Keone Kalawe, and cites the November 5 testimony by Donna Walker given to the Hawaiʻi County Council in support of the name.

In its report, the group provided these “additional discussion points” pertaining to Ahu ʻAilāʻau:

The name refers to a diety older than Pele. The most prominent issues against selecting this name, besides discussions for other names, include that some find it difficult to pronounce, most people are not familiar with this deity, and the idea that the destructiveness of this flow could not be attributed to Pele.

The first two issues appear to be a matter of education. Pronunciation of any new word can be daunting, but should not be a limiting factor for any name adoption. With time and usage, this issue will become less problematic.

The last issue is a criticism of gendered activity. The submitters have maintained part of their rationale for suggesting this feature be associated with ʻAilāʻau has to do with Hawaiʻi scientific understandings of lava flows. As generational occupants of the lands affected by the eruption, the submitters state their experiences with this flow were vastly different from previous lava flows. Specifically, the smell and characteristics of the flow were distinct. Some people from the community have also indicated they “saw” ʻAilāʻau walking amongst them during the flow.

With regard to the physical distinctions of the lava flow, it has been suggested that the ferocity of the flow, speed, and volume indicates it could be from an older vent, one not associated with Pele. The idea that a female could not be as ferocious or that only a man could demonstrate such characteristics is a point of discussion. However, It appears this has more to do with the Hawaiʻi scientific longitudinal observations of the community members. Several long time residents attest to this flow having a different feel, a different smell, a different level of energy.

With regard to recommendations for the PIG process, one comment from Dr. Larry Kimura suggests the process is “flawed” as he asserts the HBGN should look up names that are associated with these types of events from online archives and present them to the community for consideration. Another criticism involves who the PIG identifies as “the community” and how “the community” gets to “vote” on each name.

On the first issue, it is agreeable that there are lots of traditional place names that can be researched through historical documents and records or that are now available online that are easily searchable. The HBGN actively does this for its other name changes on current geographic features and this suggestion may be caused by an unfamiliarity with the HBGN and its processes. Additionally, this direction is not preferable for the PIG and HBGN in this instance. First, the names found in these sources were given to specific features already in place by specific peoples. While the PIG acknowledges the importance to bringing these names back into the consciousness of the Puna community, we feel this is a new and different feature than those that have occurred in the past, and the methodology suggested by Dr. Kimura doesn’t necessarily fit in this instance. Although the name suggestions such as those referring to the deity ʻAilāʻau falls into this similar category of historical reference. Furthermore, the PIG process emphasized a community driven effort to finding a name, hoping one would organically rise up with community support. In doing so, we had hoped to avoid an appearance of a top-down approach to decision-making, where the government is perceived to impose their will on communities regarding the naming of features in their area. Lastly, this type of in-depth research or name creation is beyond the scope and capacity of the PIG.

For the second process issue, while it is easy to say, “the community” refers to the people currently residing in Puna, it suggests that all Puna residents should have a say in the naming of Fissure 8. While they do, not all will care or want to or will be able to have their sentiments known. Thus, not all Puna community members will have an actual say or vote on which name(s) will be selected. Additionally, there were several names which could be used as examples of culturally knowledge individuals coming together to find historical references or processes to create a name. Again, it is possible that this issue has more to do with a lack of familiarity with the current HBGN process.

While processes can always be improved the PIG has acted in good faith and extended its best effort to tend to its scope as assigned by the HBGN on February 25, 2019. Focusing on a process that could be replicated for other new features associated with the 2018 Kīlauea eruption was a good decision given the report deadline of December 31, 2019. It should be stated that the PIG was clear in stating on several occasions that the HBGN does not “name” features but designates names, in this case, one that is selected by community support.

The report notes three other names on the short list of recommendations: Keahiluawalu O Pele, Ke Ahi ʻEnaʻena, and Pohāka‘ena.

The next Hawaiʻi Board of Geographic Names meeting is set for January 7. The agenda includes discussion and action on the Fissure 8 naming report. As a suggestion for how to proceed, the report says discussion with Puna councilmembers Ashley Kierkiewicz and Matt Kanealiʻi-Kleinfelder “could help give more insight into which way their community is leaning.”

“After discussions about the PIG report have concluded, the HBGN should seriously consider conducting a Board meeting in Puna to vote on designating the official name for Fissure 8,” the report states. “Councilwoman Lee Loy has previously indicated there may be County funds available to help those Board members unable to get departmental support for travel.”