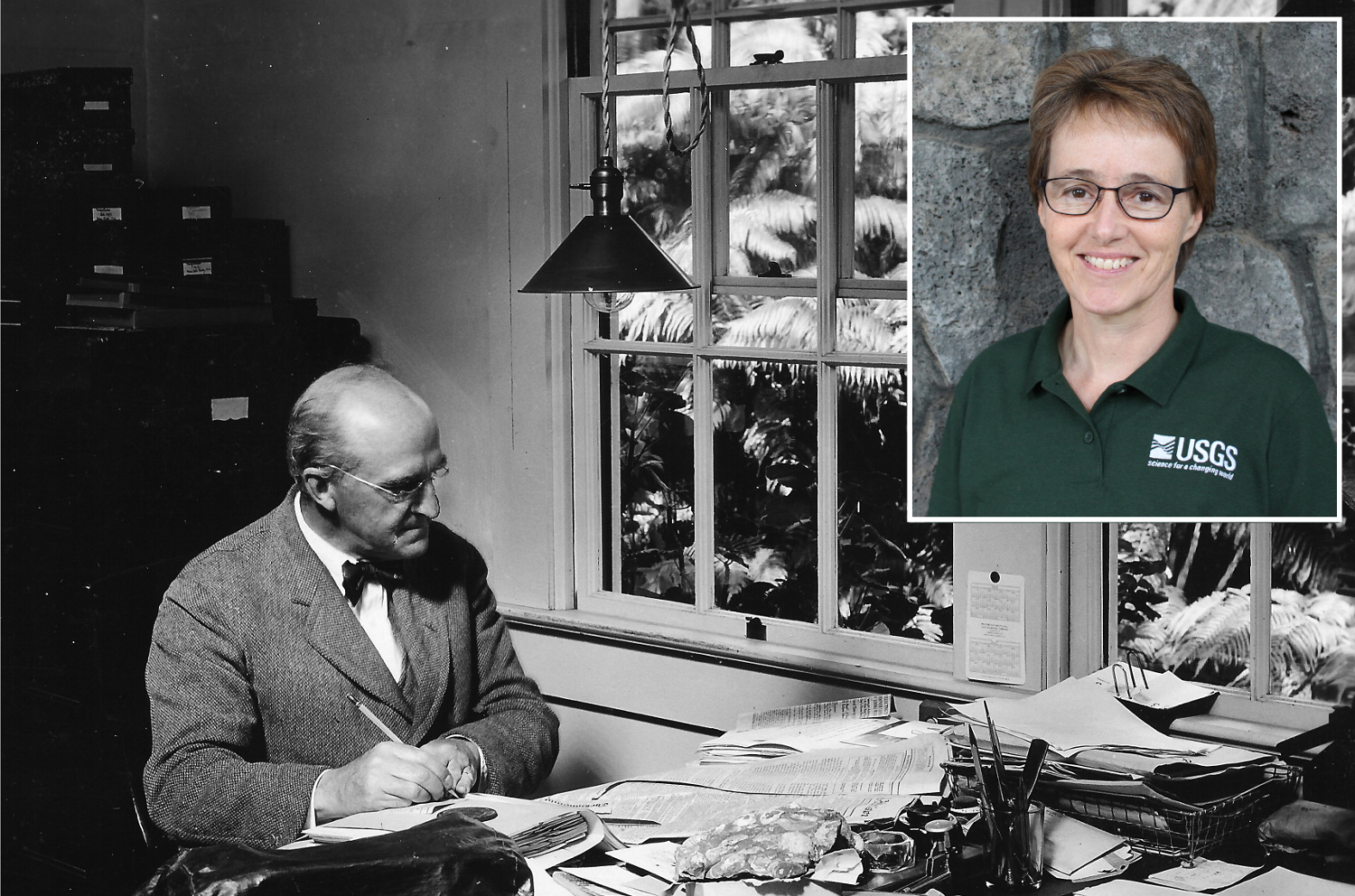 Thomas A. Jaggar, shown at his desk circa 1925, founded the Hawaiian Volcano Observatory in 1912 and served as its Director until he retired in 1940. Since then, volcano monitoring and research efforts in Hawaii have been guided by 19 scientists who have served as HVO’s “Director” or “Scientist-in-Charge.” In 2015, Christina Neal (inset) became HVO’s most recent Scientist-in-Charge. USGS photos.

VOLCANO WATCH: Who And What Is The Scientist-in-Charge?

HAWAIʻI ISLAND - The latest Volcano Watch article is the second in a series focusing on Hawaiian Volcano Observatory people and jobs during Volcano Awareness Month 2020.

(BIVN) – As a part of January’s Volcano Awareness Month, this week’s Volcano Watch is the second in a series of articles about Hawaiian Volcano Observatory people and jobs.

Since the Hawaiian Volcano Observatory (HVO) was founded by the visionary Dr. Thomas A. Jaggar in 1912, a senior scientist has been responsible for its work and staff. Over time, the leadership title has changed from “Director” to “Scientist-in-Charge” (SIC), but the principal responsibilities endure: (1) ensure that HVO has funding, people, and equipment to research and monitor Hawaii’s volcanoes and warn of hazards; (2) lead observatory staff as they respond to, document, and study eruptions; and (3) engage with emergency managers, the public, and other government agencies to minimize negative impacts.

I’ve been in this job for nearly five years, and no matter what the volcanoes are doing, no two days are the same! They do, however, all start early when, over coffee, I review email on my phone, which is never far from me in case of a monitoring alarm or call from Hawaiʻi County Civil Defense.

Once in the office, email and phone calls are a constant backdrop as I review manuscripts and research plans, write reports, and respond to inquiries. Some days, I’m offsite to confer with the National Park Service or others to plan operations or discuss volcano status. When agency leadership or Congressional visitors arrive, I provide briefings and tours to explain our volcano hazards and HVO’s mission.

SICs hold many in-house meetings. Even with modern telecommunication tools, gathering staff in the same room is still critical to make sure operations are informed and coordinated. Every Monday morning, all HVO staff meet to discuss the week’s developments and upcoming work plans. Other meetings may focus on our latest hazard assessment, plans for instrumentation expansion, or a particularly challenging science question.

It’s important for me to walk through the office nearly every day to talk with colleagues. As time permits, I join staff in the field to better understand what HVO scientists deal with on the landscape. During both eruptive and quiet times, it is critical to witness things first hand.

A significant part of the SIC’s job is the stuff of bureaucracy. As federal government employees, we must comply with federal regulations, ensure safe and efficient operations, and stay within budget. There seems to always be a new policy to digest and implement.

Thomas Jaggar passionately believed that communicating with the world about both the wonder and hazards of volcanoes is one of the most important things HVO can do. All SICs have continued this tradition and try to provide the public and decision-makers with accurate and helpful information. This often means asking HVO staff hard questions about what’s happening and what we know or don’t know. Taking it all in, the SIC must decide what action(s) to take and what to say at the next public meeting.

SICs are scientists first and foremost, and the love of volcanology is what we all have in common. Depending on who is in the job and the status of Hawaii’s volcanoes, each SIC may focus on different elements of HVO operations. Some spend much of their tenure doing basic research. Others have concentrated on emergency response, monitoring technique development, or plans for program growth. Most do a combination of these things.

All SICs depend on the talented HVO team to get the job done. Increasingly, the extended HVO family includes volunteers, cooperators, and colleagues at sister observatories, universities, and other USGS offices.

Despite the bureaucratic load, the mysteries and discoveries on Hawaiian volcanoes make the job worthwhile. The most fulfilling aspects for me are helping HVO accomplish its mission and supporting the next generation of volcano scientists.

In 2018, I had the heartbreaking task of removing portraits of past HVO directors from inside HVO’s earthquake-damaged Reggie Okamura Building at the summit of Kīlauea. Despite feeling profoundly sad, I knew that HVO would carry on without missing a beat.

Being the leader of HVO in this inspirational place is arguably the best volcanology job in the world. We have learned an enormous amount about how Hawaiian volcanoes work, but there are important gaps yet to fill. Doing so on behalf of our island communities is a great motivator.

Some days, I’m exhausted by my to-do-list and mountain of worry. But then, the volcanoes do something surprising and wondrous, and it’s all new again.