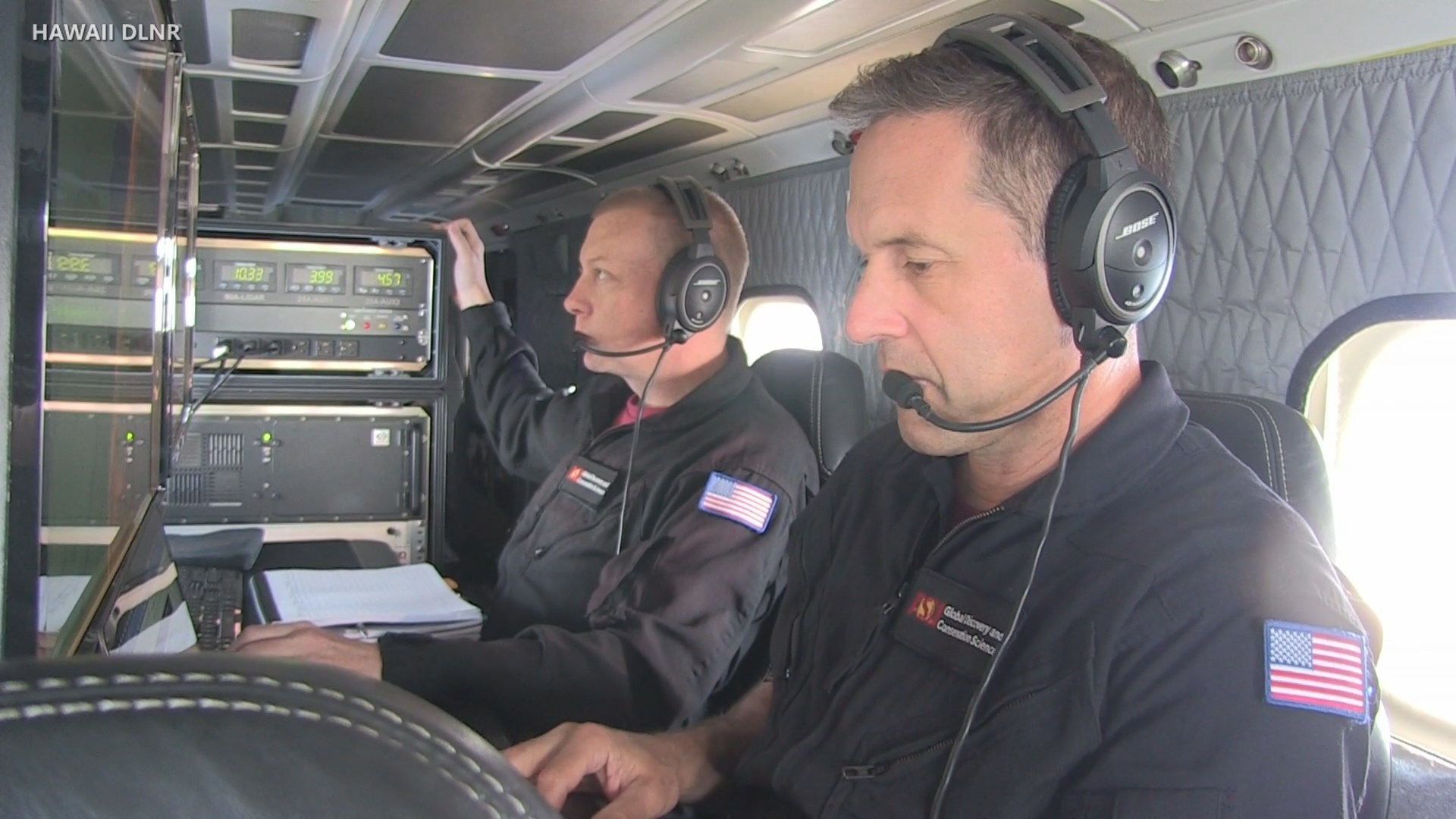 (BIVN) – The Hawaiʻi Department of Land and Natural Reaources on Wednesday shared video of an aerial observatory mission to map coral reefs in Hawaiʻi island waters.

According to the DLNR:

Following the latest mass coral bleaching event in Hawaiian waters last fall, the DLNR Division of Aquatic Resources (DAR) elected to use an equipment rich, aerial platform to map and access the health of reefs along the more than 700 miles of shoreline in the Main Hawaiian Islands.

Operated by the Arizona State University (ASU) Center for Global Discovery and Conservation Science, a twin-engine turbo prop aircraft is currently crisscrossing the state, creating an in-depth picture of reefs. According to the program’s director, Dr. Greg Asner, “We’re looking for a net change in live coral cover on reefs. Our airborne observatory has unique capabilities that allows us to see through seawater to a depth of 70 feet. What we want to see is where there’s live coral on the seafloor, where there’s dead coral, where there’s algae, the depth of the water, and 3D imaging of fish habitat.”

DAR partnered with the ASU team after they’d mapped thousands of acres of ʻōhiʻa forest around the state to help detect the presence of Rapid ʻŌhiʻa Death, the fungal disease that has killed or injured Hawai‘i’s most abundant and important native forest trees.

DAR Administrator Brian Neilson commented, “For many years we’ve conducted regular diving surveys and assessments to create data that helps guide management decisions. Obviously mapping this way is time intensive and we would never be able to survey all of our near-shore reefs. The ASU Global Airborne Observatory will produce a full and complete map of every reef and do it in about 30 days of flying. This information is critical for managing our near-shore reefs and developing strategies to help our corals survive the impacts of climate change”

On a recent flight Asner and his team of three (2 pilots and a technician) flew back and forth along west Maui’s coastline. In a couple of hours they’ve covered many miles of water and coastline. Echoing DAR Administrator Neilson’s comments, Asner said, “There is no amount of diving that is going to give us enough coverage to understand what’s going on with Hawai‘i’s coral and the reefs. The area is too large and complex to get to it by diving alone…even with the thousands of hours of diving each year. Our platform gives us full coverage and the context for additional field work that focuses on one of the three major issues impacting corals reefs.”

The most serious impact, fueled by global climate change, are bleaching events caused by heat waves. Hawai‘i has experienced serious bleaching in three of the past five years. Asner added, “Bleaching stresses reefs and NOAA (National Oceanic & Atmospheric Administration) predicts we’ll have these heat waves every year or two by 2030.” The other major stressors on coral reefs are land based pollution and sedimentation and overfishing. The outcome of the aerial surveys will help establish relationships and connections between science and management. The project also reflects Governor David Ige’s 30X30 Marine Initiative, which intends to expand our network of marine managed areas to at least 30% of Hawai‘i’s reefs by 2030.

For the first few weeks of this year, the survey team was grounded by bad weather. So far, it’s estimated they’ve mapped about 30% of the reefs. So, if you see a distinctive green and white aircraft flying overhead at about 8,000 feet, you now know what they’re up too. Another tool in the effort to save what are considered the very foundation of Hawaiʻi’s natural and cultural heritage.