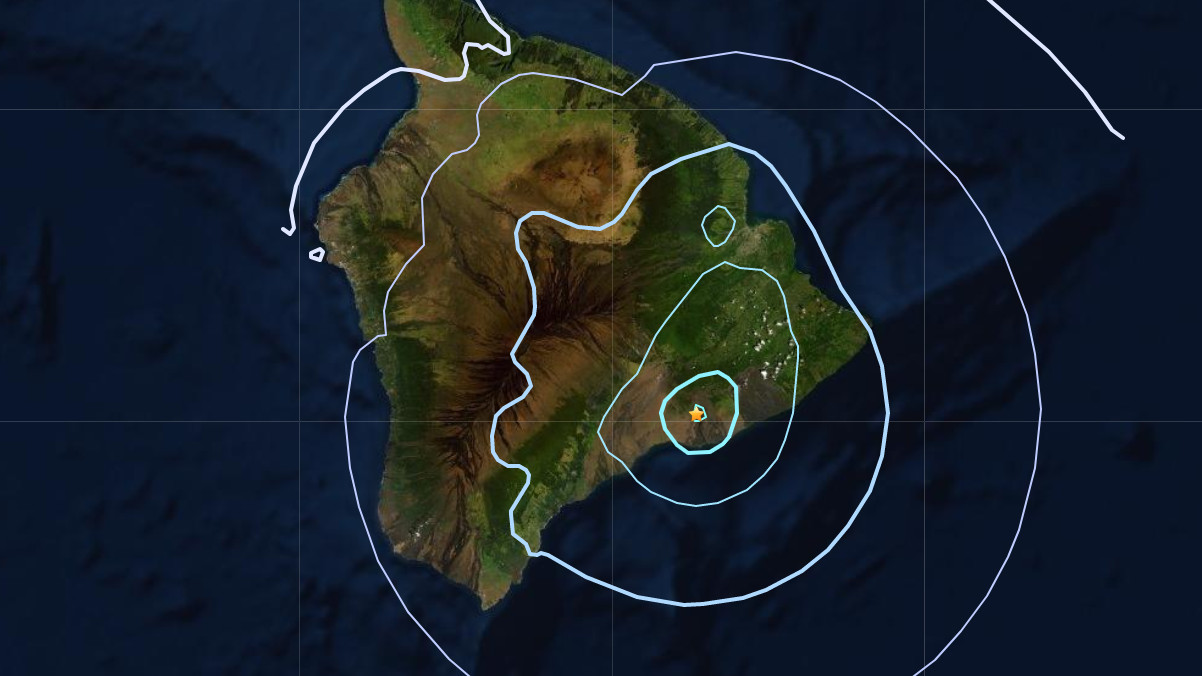 HAWAIʻI ISLAND - The earthquake was measured at a Magnitude 4.2 and was centered 8 miles south southeast of Volcano.

(BIVN) – A Magnitude 4.2 earthquake shook the south flank of Kīlauea volcano just after 8:37 p.m. on Sunday night, and was felt as far away as Hilo, Kona and Waimea.

The quake was located about 8 miles south southeast of Volcano Village, inside Hawaiʻi Volcanoes National Park near Holei Pali, at a depth of 4.8 miles (updated from USGS).

Within 20 minutes of the event, 100 people reported feeling the temblor on the USGS website, mostly from Hilo and Puna but some in Kona and Kaʻū.

The quake, initially reported as a Magnitude 3.9, did not generate a tsunami, according to the Pacific Tsunami Warning Center. However, some areas may have experienced shaking, the Honolulu-based agency said.

UPDATE (9:26 p.m.) – “As in all earthquakes, be aware of the possibility of after-shocks,” said the Hawaiʻi County Civil Defense in an alert message. “If the earthquake was strongly felt in your area, precautionary checks should be made for any damages; especially to utility connections of Gas, Water, and Electricity.”

UPDATE (10 p.m.) – According to seismologist Brian Shiro with the USGS Hawaiian Volcano Observatory, the earthquake had no apparent effect on Kīlauea or Mauna Loa volcanoes. “We see no detectable changes in activity at the summits or along the rift zones of Kīlauea or Mauna Loa as a result of this earthquake,” Shiro said in a HVO media release, adding “aftershocks are possible and could be felt.” HVO continues to monitor Kīlauea and other Hawaiian volcanoes for any changes.

Kīlauea’s south flank has been the site of 20 earthquakes of magnitude-4.0 or greater during the past 20 years. Most are caused by abrupt motion of the volcano’s south flank, which moves to the southeast over the oceanic crust. The location, depth, and waveforms recorded as part of today’s earthquake are consistent with slip along this south flank fault. This earthquake is likely an aftershock of the 2018 magnitude-6.9 earthquake as the volcano continues to settle.