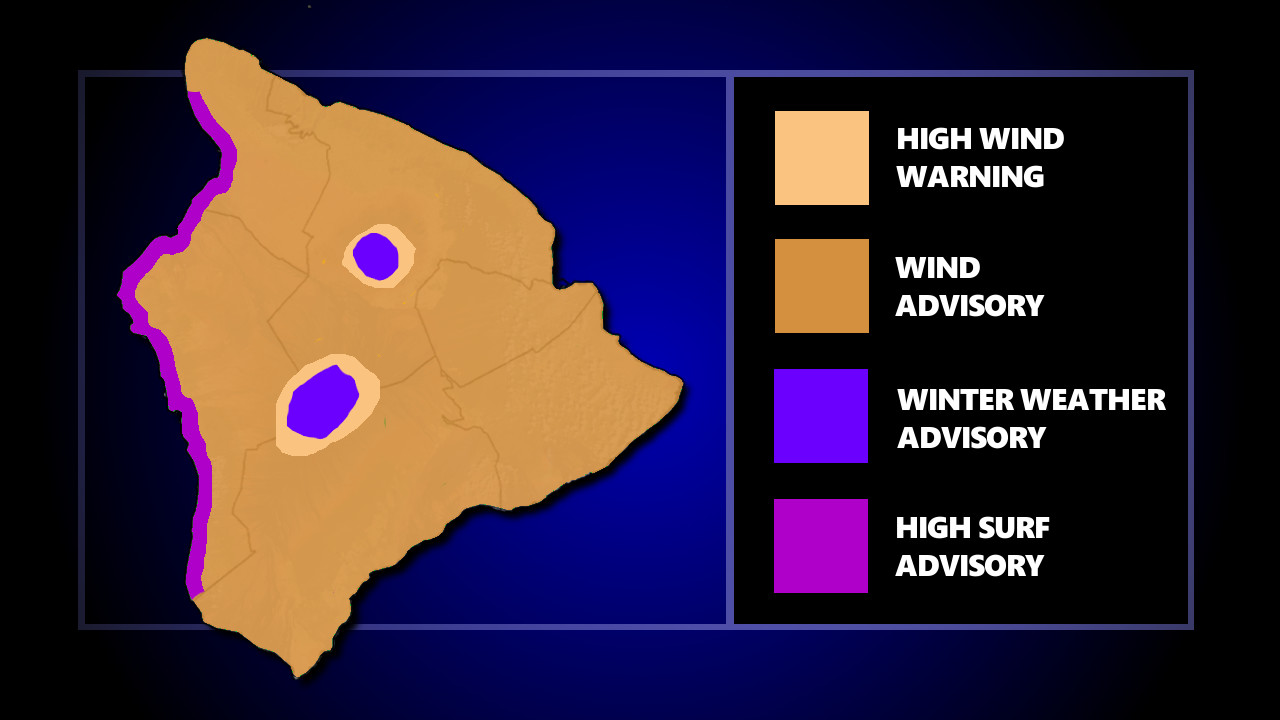 (BIVN) – A Wind Advisory is in effect for the entire island of Hawaiʻi, with a High Wind Warning and Winter Weather Advisory in place for the summits of Maunakea and Mauna Loa.

Hawaiʻi County Civil Defense warned residents about the coming windy conditions on Sunday evening, saying that on Monday morning, roadways may be blocked by downed trees and other debris, and utility lines may be damaged leading to outages.

There is at least one confirmed road closure reported. The Hawaiʻi Police Department says Highway 11 is closed in both directions near mile marker 62 in Kaʻū due to a downed utility line. “Crews are responding, but the road will be closed for several hours,” reported Hawaiʻi County Civil Defense. “Police recommend using Kaʻalaiki Road during the delay.”

On the summits, the National Weather Service says a Winter Weather Advisory is in effect, and wind gusts of 120 mph are possible. Mixed precipitation is expected on Mauna Kea and Mauna Loa, with additional snow accumulations of 1 to 3 inches and ice accumulations of around one tenth of an inch.

A High Surf Advisory is also in effect for Kona shores.

The strong and gusty winds are the result of low pressure advancing towards the islands. Unsettled weather will also continue with bands of showers moving through the islands, the National Weather Service says. Forecasters were tracking a line of showers overnight and reported this in a Monday morning discussion posted just before 4 a.m. HST:

One line of showers has moved down the island chain overnight, bringing gusty outflow and brief heavy showers. The various lightning networks have picked up some isolated thunderstorms within the band, but the bulk of the thunderstorm activity remains to the northeast of the coastal waters this morning. The band is moving over the Big Island during the pre-dawn hours. As it approached and moved over the Big Island, rainfall intensity within the band increased, prompting a flood advisory.

The low will continue to move closer to the islands, and as it does so, forecasters say winds will weaken.