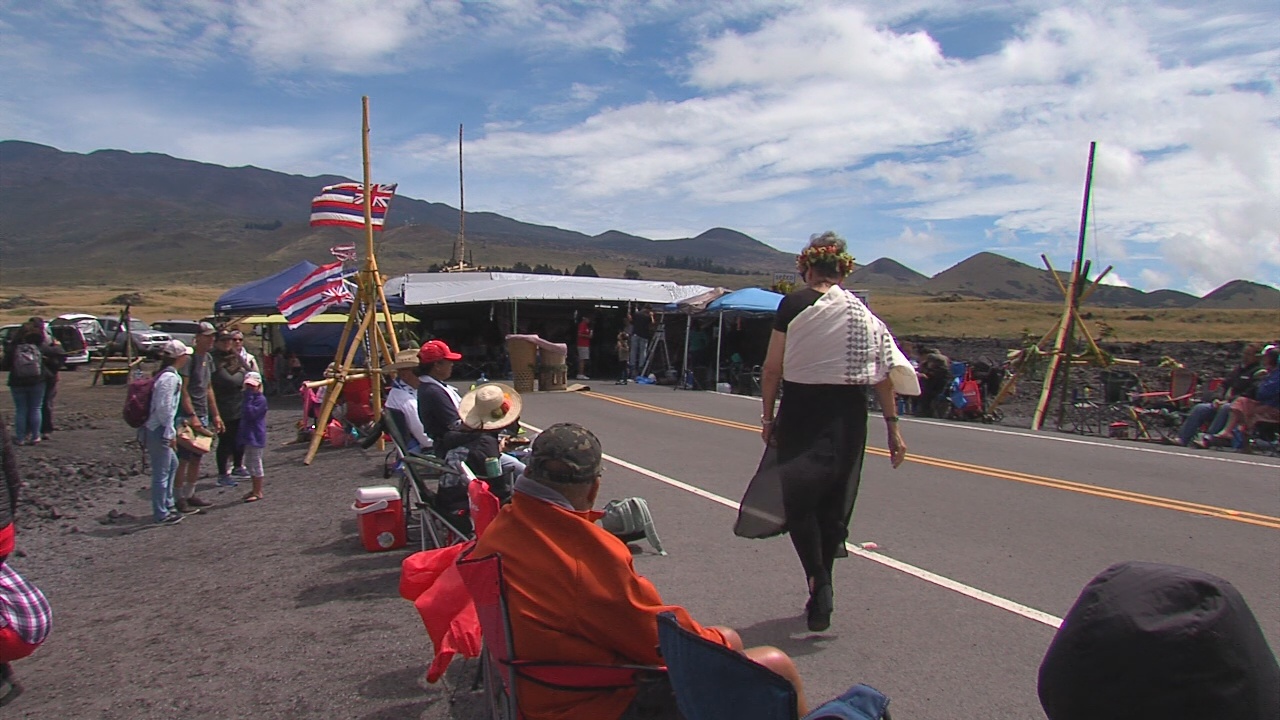 file image of the Mauna Kea Access Road in 2019, with a kūpuna tent of TMT opponents in the middle. The tent has since been moved to the side.

HONOLULU, Hawaiʻi - After warning the state of their intent to sue, three Hawaiian Home Lands beneficiaries are taking the state and various officials to court over the management and use of road.

(BIVN) – The Native Hawaiian Legal Corporation on Thursday announced it has filed a lawsuit on behalf of three native Hawaiians “to end decades of misuse and mismanagement of Hawaiian home lands on Maunakea,” with the controversy over the Mauna Kea Access Road being central to the case.

The Mauna Kea Access Road has become a focal point in the standoff over the Thirty Meter Telescope planned for Mauna Kea.

From the Native Hawaiian Legal Corporation:

Since the 1960s, the State of Hawai‘i has been using Hawaiian home lands for the Mauna Kea Access Road (“MKAR”) free of charge and in violation of the law. The lawsuit contends that the Hawaiian Homes Commission and the Department of Hawaiian Home Lands (collectively, the “DHHL”) violated trust duties owed to native Hawaiian beneficiaries and the terms of the Hawaiian Homes Commission Act by doing nothing to stop the unpermitted and uncompensated use of lands specifically set aside to benefit native Hawaiians. It also contends that the State, through its Department of Transportation and Department of Land and Natural Resources, violated the Commission Act and their own trust duties to native Hawaiians by using and controlling Hawaiian home lands without proper authority and without paying a penny.

The lawsuit is filed on behalf of Pualani Kanaka‘ole Kanahele, Halealoha Ayau, and Keli‘i “Skippy” Ioane, native Hawaiian beneficiaries of the Hawaiian Homes Commission Act and highly respected community leaders who live on Hawai‘i island. “The State’s use of and failure to pay for this valuable stretch of land deprives our home lands trust of needed land and revenues to help put the 28,000 native Hawaiians currently on waiting lists on homesteads. They simply took the land in the 1960s without proper permission from the Hawaiian Homes Commission and without consulting with beneficiaries.” Kanahele, Ayau and Ioane jointly asserted. “We firmly believe that only the Commission can regulate and manage the MKAR, and only if it acts in the exclusive interests of its native Hawaiian beneficiaries.”

The lawsuit seeks to require the State of Hawai‘i to compensate DHHL for its past use of the lands underlying the MKAR, and to stop any further uncompensated use of those lands until the State and DHHL act in the best interest of native Hawaiian beneficiaries and comply with the Commission Act. According to the plaintiffs, “In Hawai‘i, land is power. The breach of trust involving the MKAR is yet another chapter in the State’s long history of disenfranchising native Hawaiians by controlling land and resources vital to our survival and cultural identity.

The Native Hawaiian Legal Corporation is a nonprofit, public interest law firm that provides legal assistance to families and communities engaged in perpetuating the culture and traditions of Hawai‘i’s indigenous people, including beneficiaries of the Hawaiian Homes Commission Act.

In its 12-page complaint, the plaintiffs gave this background as part of the “factual allegations”:

43. The MKAR, also sometimes referred to as the Mauna Kea Observatory Road, is an approximately 6.27 miles long road that begins at the intersection with Saddle Road, also known as the Daniel K. Inouye Highway (Route 200), to 125 feet past the Hale Pohaku entrance, also known as the Onizuka Center for International Astronomy Visitor Information Station (“Visitor Information Station”).

44. After it reaches the Visitor Information Station, the MKAR continues as the Summit Access Road to the summit of Maunakea.

45. The Summit Access Road is located on land managed by the DLNR.

48. In 1964, agents and employees of Defendant State of Hawaiʻi bulldozed what would become the MKAR.

50. The State did not obtain authorization from either DHHL or HHC to construct the MKAR over Hawaiian home lands.

52. UH did not obtain authorization from the DHHL Defendants or their predecessors to construct the MKAR over Hawaiian home lands.

54. The MKAR is built over approximately 65.142 acres of Hawaiian home lands.

55. The MKAR is not a State, county or other public highway.

56. In 1995, at the end of a special session, the State Legislature enacted Act 14 with the declared intention to resolve, in part, the State’s failure to compensate the Hawaiian home lands trust for the “use” of streets and roadways built on the trust lands for the benefit of the general public without compensation to the Hawaiian home lands trust.

58. Act 14 authorized a future land exchange to compensate for the rent free “use” of acreage underlying streets and roadways improperly constructed on Hawaiian home lands trust lands by State Defendants between August 21, 1959 and July 1, 1988.

59. Since the passage of Act 14, MKAR has remained part of the Hawaiian home lands trust inventory.

60. In the 24 years that have passed since the enactment of Act 14 in 1995, neither the DHHL Defendants nor State Defendants have initiated a land exchange for the 65.142 acres of Hawaiian home lands upon which the MKAR is situated.

61. For the past 24 years, no State agency or body has compensated the DHHL Defendants for the continued use of the 65.142 acres of Hawaiian home lands trust lands under the MKAR.

62. The DHHL Defendants have not sought compensation from the State Defendants for the continued use of the Hawaiian home lands trust lands under the MKAR since July 1, 1988.

63. The DHHL Defendants have not attempted to prevent the State Defendants from continuing to use the Hawaiian home lands trust lands under the MKAR.

DOT Asserts Control Over The MKAR

64. On March 15, 2018, the DOT purportedly approved the designation of 6.27 miles of the MKAR between the intersection with Daniel K. Inouye Highway (Route 200) up to 125 feet past the Visitor Information Center entrance as State Highway Route 210.

65. On July 15, 2019, the DOT, with the assistance of the DOCARE and the DLNR, closed the MKAR to the public to allow for the transport of equipment and materials for the construction of the Thirty Meter Telescope, allegedly pursuant to HRS chapter 264.

66. On August 30, 2019, the Department of the Attorney General, DHHL, and the DOT issued a joint statement asserting DOT control and authority over the MKAR.

67. The joint statement declared that “all claims regarding use of roads and highways crossing DHHL lands have been resolved.”

68. Defendants State of Hawai`i, DOT, DLNR, DHHL and their respective officials, continue to assert that the DOT has control and legal authority over the MKAR.

70. On or about September 7, 2019, Plaintiffs exhausted all required administrative remedies prior to commencing this action by serving upon Defendants a notice to sue letter pursuant to HRS § 673-3.

71. The State Defendants use of Hawaiian home lands trust lands underlying the MKAR depleted the trust of both land and revenue.

73. The total compensation for use of the MKAR since 1988 through the present and continuing through final judgment in this action exceeds the jurisdictional minimum in an amount to be proven at trial.

The plaintiffs are asking the court to declare that DHHL and State defendants have breached their trust obligations, declare the Mauna Kea Access Road is not a state highway, and “enjoin State Defendants from asserting control or authority over the MKAR unless and until they have complied with their trust duties”. They are also asking to be awarded “land and/or money damages to restore the Hawaiian home lands trust in amounts to be determined by the finder of fact or at trial”.