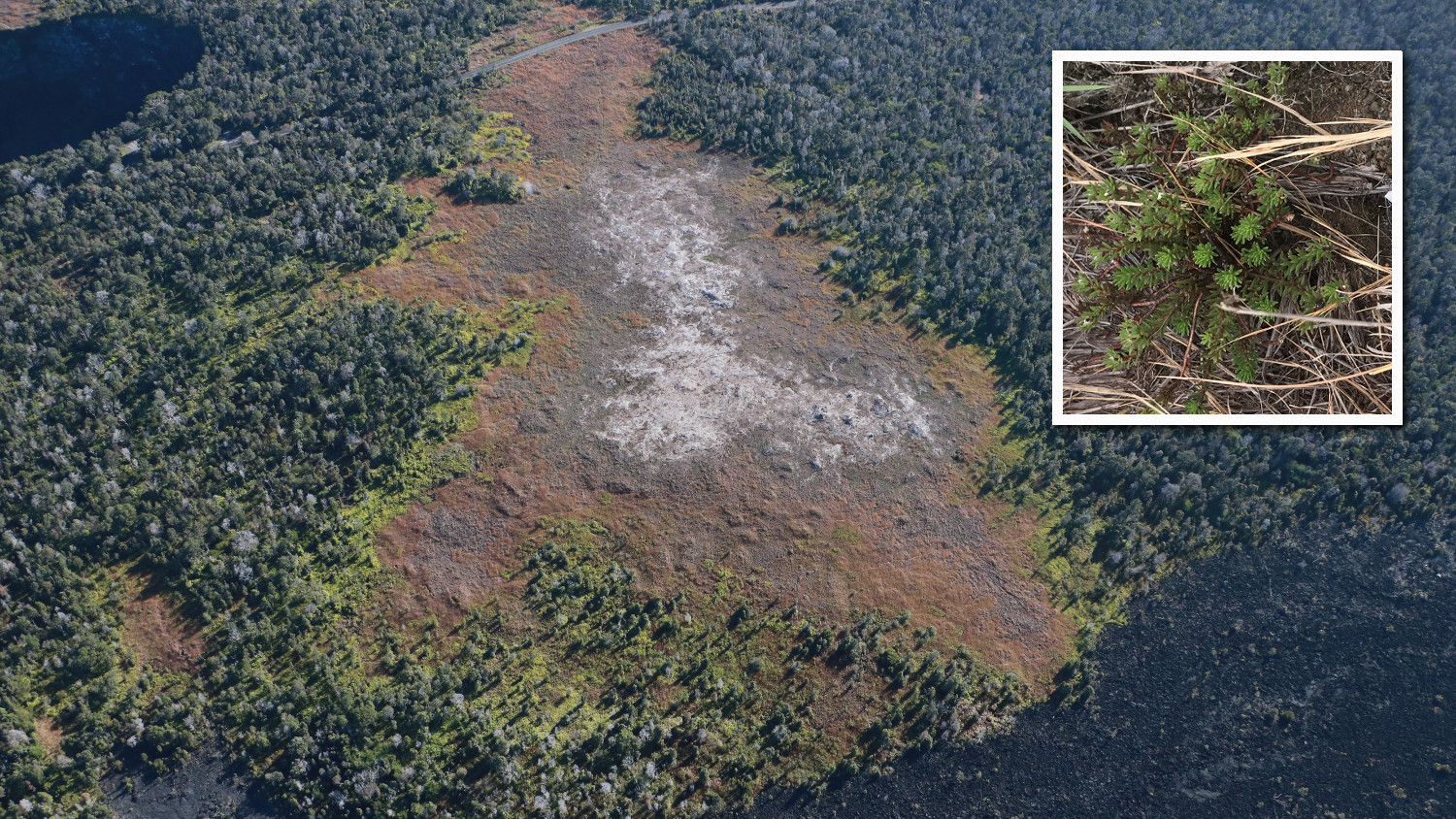 HAWAIʻI VOLCANOES NATIONAL PARK - The ‛Ihi mākole plant, which can be found in the Puhimau thermal area, is now challenged by invasive species. Portulaca sclerocarpa (also known as ‛Ihi mākole) is a critically endangered small succulent plant in the purslane family (Portulacaceae). It only occurs on the Island of Hawai‘i and on a small islet off the coast of Lanā‘i. It can be found in various sites in Hawaiʻi Volcanoes National Park, including the Puhimau thermal area.

The Puhimau thermal area, located in the upper East Rift Zone of Kīlauea Volcano has been an area of scientific interest since it was first detected around 1938. Sometime in the mid-1930s, heat and gases migrated to the surface as magma intruded to shallow depths beneath the area. Since then, changes in the chemistry of emitted gases have been associated with additional magma intrusions. Therefore, the Puhimau thermal area may be a potentially valuable site for monitoring the movement of magma in the East Rift Zone. Today, the Puhimau thermal area is about 50 acres (0.2 sq km) in size with hot (as high as about 200 degrees Fahrenheit, or 93degrees Celsius), steaming soils.

While there used to be over 4,000 individual Portulaca plants in the Puhimau thermal area in 1983, there are now fewer than 30 naturally occurring individuals. Because of this, National Park Service staff have grown Portulaca in a greenhouse and worked on various planting projects in the area. Unfortunately, these manually planted individuals also seem to survive in low numbers, and the National Park finds itself wondering which sites might be best for future Portulaca plantings.

USGS biologists have been working with the National Park Service to try to better understand what is negatively affecting Portulaca, reasons that its growth may be limited, and what habitats are best for planting success. This led to a recent collaboration between USGS geologists at the Hawaiian Volcano Observatory (HVO) and USGS biologists at the Pacific Island Ecosystems Research Center (PIERC). The study focused on how gas release at Puhimau may have been affected by the 2018 eruption of Kīlauea, and how the changing nature of the hotspot might affect Portulaca survival and growth. Recent fieldwork explored the soil carbon dioxide (CO2) outgassing and temperatures that these small plants experience, as well as bulk chemistry and isotopic composition of released gases.

It turns out that Portulaca can survive at soil temperatures up to 155 degrees Fahrenheit 68 degrees Celsius), although they may prefer lower temperatures. Competition by invasive grasses introduced in the 1980’s, as well as feeding on seed capsules by invasive rodent species, may be leading to low population growth rates. This creates a bit of a conundrum, because the grasses cannot live in the very hot soils, but then grass-free sites may be too warm for the native Portulaca. On the other hand, seeds that fall into thick grassy patches probably face too much competition for water. Protective wire cages, which were installed around the plants, have failed to keep mice from eating seed capsules. This may help explain the lack of seedlings growing around adult plants over time.

In addition, Puhimau soils tend to be quite thin—only about 12 inches (30 cm) deep. Between the high temperatures and lack of depth, it is likely that soils dry out quite quickly after rainfall events. This makes susceptibility to drought and changing climates another factor that will influence the success of planting sites. Work will continue to try to bolster populations and better understand how to protect this endangered plant by creating a planting guide for managers. The recent study helps provide additional information on the different environmental stressors that Portulaca faces.